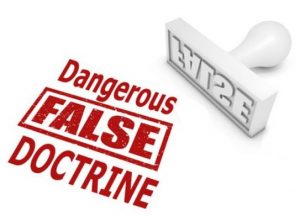 The Amazon documentary Bible Conspiracies, suggests that Jesus might actually be Apollonius. The documentary does not dispute that Jesus existed as a historical figure, however, it claims that the person described in the New Testament as the ‘son of God’ may have been Apollonius. Apollonius of Tyana was born the 3rd or 4th year BC in Central Anatolia.

NTEB – Jesus has been confused with a Greek philosopher who lived at the same time and was thought to restore life to the dead, according to a new documentary. Descriptions of Jesus’ life and the miracles he performed in the New Testament may have been mistaken for Preacher Apollonius of Tyana.

For the past 2,000 years, the numbers of challengers against Jesus of Nazareth as being the Son of God have been many, with 100% of those challengers winding up in the trash bin of history. This latest pile of slop called which Amazon Prime is calling a documentary, ‘Bible Conspiracies‘, will be equally effective.

“And we know that the Son of God is come, and hath given us an understanding, that we may know him that is true, and we are in him that is true, even in his Son Jesus Christ. This is the true God, and eternal life.” 1st John 5:20 (KJV)

There are many things about the life of Jesus that a con artist could replicate to fool a small number of people. Something that they cannot do, however, is be the fulfillment of nearly 50 Old Testament prophecies which were written thousands of years before the scammer was even born. Then of course, attempting to replicate that ‘rising from the dead’ trick might be a tad difficult to pull off.

“And he said, Take heed that ye be not deceived: for many shall come in my name, saying, I am Christ; and the time draweth near: go ye not therefore after them.” Luke 21:8 (KJV)

In the 28 years that I have been saved, I have read lots of books and seen lots of movies that claimed to UNCOVER!! BIBLE SECRETS!!! TRUTH REVEALED!!! and not one time has a single of one of them had anything to do with the actual Bible, or revealed any actual secrets. This fake documentary ‘Bible Conspiracies’ will not only not do any better, it does a whole lot worse.

Jesus Christ ‘was GREEK and not Jewish’: Amazon Prime documentary claims ancient philosopher Apollonius of Tyana who preached and performed miracles was actually the Son of God

FROM THE DAILY MAIL UK: There are striking physical similarities between the two and there is more evidence that Apollonius existed. The Amazon documentary Bible Conspiracies, suggests that Jesus might actually be Apollonius.

The documentary does not dispute that Jesus existed as a historical figure, however, it claims that the person described in the New Testament as the ‘son of God’ may have been Apollonius. Apollonius of Tyana was born the 3rd or 4th year BC in Central Anatolia.

Both Jesus and Apollonius were preachers and supposedly performed miracles in the first century AD. They are both depicted as having long beards.  The series explains how Apollonius rose to prominence by performing miracles and amassing followers – in a similar way to Jesus.

‘He became a disciple of Pythagoras renouncing flesh, wine and women. He wore no shoes and let his hair and beard grow long,’ the documentary reveals.

It continues: ‘He soon became a reformer and fixed his abode in the Temple of Aesculapius’. Apollonius rose to prominence by amassing religious followers as he preached and performed miracles. ‘Eventually Apollonius became a wise sage himself and his own notoriety grew.

‘Aurelian the Roman Emperor vowed to erect temples and statues to his honour. Was there ever anything among men more holy?

‘He reportedly restored life to the dead and spoke of things beyond the human reach. And, unlike Jesus, there is evidence to prove that Apollonius actually existed.’   The explosive claims go against more traditional views of Apollonius that believe him to have been no more than a philosopher.

Reactions to the documentary have not been kind.

The “Other Jesus” Story That Scares Christians: Apollonius of Tyana

Apollonius of Tyana is said to be a LOT like Jesus according to skeptics like Bart Ehrman, Richard Carrier, Robert Price and their many followers. Let’s examine this supposed parallel in detail today.

Posted with Permission from Now the End Begins