Charlatan Definition for those who do not know

A person who makes elaborate, fraudulent, and often voluble claims to skill or knowledge; a quack or fraud. One who pretends to knowledge, skill, importance, etc., which he does not possess; a pretender; a quack, mountebank, or empiric. Synonyms Impostor, cheat, pretender; Mountebank, etc. 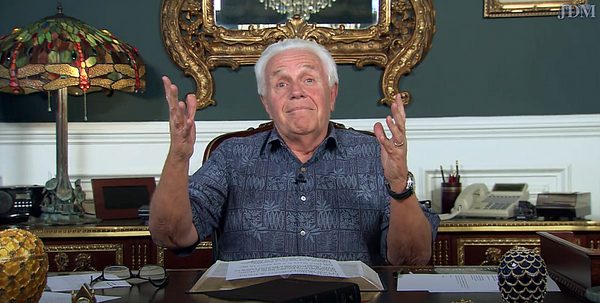 2nd Corinthians 11:13-15 “For such are false apostles, deceitful workers, transforming themselves into the apostles of Christ.14 And no marvel; for Satan himself is transformed into an angel of light. 15 Therefore it is no great thing if his ministers also be transformed as the ministers of righteousness; whose end shall be according to their works.”

This Charlatan teamed up with Devil’s Disciple Kenneth Copland in his fund raising event!

Louisiana televangelist Jesse Duplantis said at a recent televised fundraiser that Christians “can speed up the time” of Jesus’ Second Coming by donating more money.

“I honestly believe this … the reason why Jesus hasn’t come is because people are not giving the way God told them to give,” he said, according to a clip shared on Twitter by the left-wing group Right Wing Watch.

Speaking at a fundraiser for Kenneth Copeland’s ministry, he continued, “When you understand this, you can speed up the time.”

Duplantis, the pastor of Covenant Church in Destrehan, St. Charles Parish, a multi-millionaire who owns a private plane and has been criticized for his lavish lifestyle, added, “I realized that I will not move people emotionally to give, I’m gonna have people move according to the Word of God. What is God saying to you?”

Read the rest about these devils here

Who Are You Following? False Preachers and Teachers Are Transforming Themselves Into the Apostles of Christ