The Apostate and Prosperity Pimp wants his groupies to get on social media and defend his doctrine of devils! 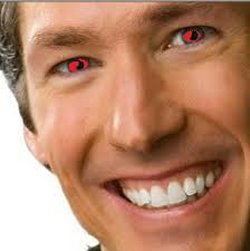 Houston Chronicle – “There’s been so much misinformation about the church this week, I wanted to clarify some things,” Pastor Joel Osteen told the congregation of Lakewood Church Sunday morning.

On most Sundays, the non-denominational megachurch draws some 16,000 worshippers – a crowd appropriate to its building, formerly the Compaq Center arena for the Houston Rockets.

But that wasn’t the case this week.

That morning, during “Hope for Houston,” special services held in the wake of Hurricane Harvey, the garage, checkpoints and aisles were relatively empty.

Read the full story here.
If you go to the store to buy Meat, don't run to the Milk section or the Junk Food aisle looking for it.