Nancy Pelosi gushed over the fact that the Communist Democrats were so diverse with Illegal Aliens, Homosexuals, Lesbians, Tranny’s and the rest of the LGBTQPXYZ crowd!

She also Praised Democrats for being champions of abortion during her rehearsed DNC speech.

With all of that Abomination, that is what will send all of them
to HELL! 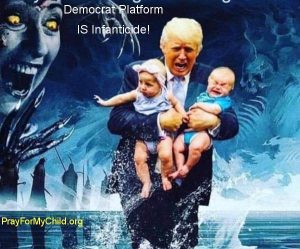 Micaiah Bilger | Life News – House Speaker Nancy Pelosi praised Democrats for being the champions of abortion Wednesday during her speech at the Democratic National Convention.

For years, Pelosi has helped push the Democratic Party to adopt an increasingly radical pro- abortion agenda, one that calls for unrestricted abortions up to birth and taxpayer funding for them. Earlier this year, she even led Democrats in blocking a measure to protect newborns from infanticide.

On Wednesday, the California congresswoman claimed Democrats are empowering women by advocating for abortion on demand, National Review reports.

“We are unleashing the power of women to take our rightful place in our national life by championing a woman’s right to choose and defending Roe v. Wade,” she said. “Who’s standing in the way? Mitch McConnell and Donald Trump.”

If Democrats win the White House and the Senate, Pelosi promised that they will push to expand abortions across America. Read more

Don’t be fooled by any of these Jezebel’s or the lead Ahab, Creepy Joe Biden!