Is this one of Obama’s and Hillary’s Refugees they brought in?

The drama began when Noel Droni asked a 37-year-old homeless man outside the interdenominational Times Square Church, on W. 51st St., if he was a Christian on Monday, cops said. When the man told Droni he was Christian, Droni allegedly pulled a red wrench from his backpack and smashed the church’s glass door.

He yelled “Allahu akbar,” Arabic for “God is great,” and then vowed violence, police said.

“I am going to blow up the church and come back and kill any Christians,” he said, according to court papers. Read the rest here.

They do not tell you in the article that the “homeless man” is a Black Muslim from UGANDA. I had to do some searching and here is a screen shot of his arrest record. Could not find a mugshot. 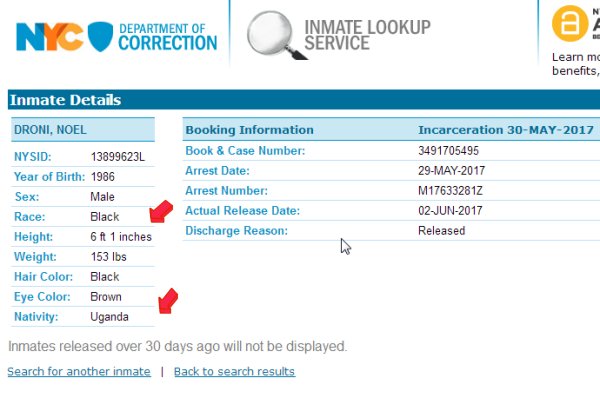 Uganda is predominantly Roman Catholic. Catholics are not Christians, they are Catholics! In 2009, the northern and west Nile regions were dominated by Roman Catholics, and Iganga District in the east of Uganda had the highest percentage of Muslims. Source: Wikipedia

Kampala — Even though Catholics and Anglicans are still the dominant faiths in the country, they are losing believers to the Islamic faith, Pentecostals/ Born Again/ Evangelicals and the Seventh Day Adventists.

The 2014 National Population and Housing Census has indicated that in the last 10 years, Catholics and Anglicans have declined yet Muslims, Pentecostals, the Seventh Day Adventists and traditionalists are increasing in number.

Islam devotees go on defense after acid attack on preacher

KAMPALA, Uganda — A Pentecostal preacher who has converted thousands of Muslims to Christianity was disfigured when men shouting “God is great” in Arabic threw acid in his face in a Christmas Eve attack that has stoked religious tensions here.

The victim, Umar Mulinde, is a Muslim convert to Christianity and now a vocal critic of Islam. He is also a key figure in opposing the establishment of Islamic civil courts in this majority Christian country. Read more here.