What does it really mean?

In Jon’s plain and simple English, “Hey government, keep your demonic nose out of my Biblical belief. You DO NOT run my life!”

I would say probably around 80% of those who profess to be Christians are Biblically Ignorant as to what Separation of Church and State really means. Most just think, and parrot, what they have heard from Apostate Government Controlled Preachers, or other Biblically Ignorant pew setters!

How do I arrive at that number? Well, the same amount do NOT know what the Gospel is, nor do really know Jesus as Lord and Savior!!

2nd Corinthians 6:17 “Wherefore come out from among them, and be ye separate, saith the Lord, and touch not the unclean thing; and I will receive you,” 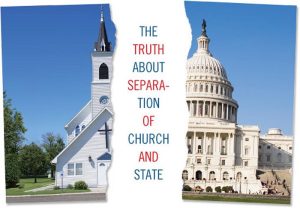 The issue of the separation of church and state has prompted much debate. In spite of the rhetoric common to revisionist historians, America’s Founding Fathers did not seek to eradicate religion. Indeed, an overwhelming majority of those who signed the Declaration of Independence counted themselves as religious men. It may come as a surprise to learn that nowhere in the Constitution do the words separation of church and state appear. The idea of church/state separation came from a letter penned by Thomas Jefferson. Again, contrary to the propaganda from the revisionists, Jefferson’s cause was to protect religious liberties from an intrusive government! In no way did Jefferson or any of the other framers of the U.S. Constitution seek to restrict Americans’ religious activities.

Americans live in a constitutional republic rather than a theocracy—and for good reason. State-sanctioned churches have historically become puppets of the government. In countries with state churches, the edicts of fallible man take precedence over the inspired teachings of Scripture. When the state is the head of the church, the integrity of the gospel is all too easily compromised.

The separation is designed to protect religious liberty.

The first of the Bill of Rights says, “Congress shall make no law respecting an establishment of religion, or prohibiting the free exercise thereof.” That wording is the result of lessons learned from the dictatorial Holy Roman Empire and King Henry VIII’s power grab in the 1534 Act of Supremacy. The point of the First Amendment was not to rid the country of religion but to ensure that the federal government did not select a religion and give it exclusive support. Americans are free to worship as they please. (Even if who and what they worship is an ABOMINATION!)

Another popular misconception is that men and women of faith have no business being involved in politics.

But it is hardly a secret that George Washington was an active member of Truro Parish, his local Episcopal Church. In the early days of the republic, a church met within the Capitol Building —a church attended, of all people, by Thomas Jefferson. “Within a year of his inauguration, Jefferson began attending church services in the House of Representatives. . . . Throughout his administration Jefferson permitted church services in executive branch buildings. The Gospel was also preached in the Supreme Court chambers” (“ Religion and the Founding of the American Republic: Religion and the Federal Government, Part 2,” www.loc.gov/exhibits/ religion/rel06-2.html, accessed 4/13/20).

A Christian should view the separation of church and state as a good thing.

Those who wish to combine church and state usually do so thinking that Christianity can help stamp out evil, if the church is in charge. But history shows that the melding of church and state gives rise to corruption, totalitarianism, and oppression.

Puppets in the Pulpit: Who is in Control of the Church?

Christians can and should be involved in the political process, just as anyone else.

But Jesus said, “My kingdom is not of this world” (John 18:36), and Christians understand that enforcing Christianity through a national church is not the answer to the world’s problems. The limits imposed on the government in the U.S. Constitution are wise and designed to preserve the religious freedom of individuals. Adapted from: Got Questions

You Can NOT Separate God from Politics or any other aspect of your Life, if you are a True Christian

If there is anything that will spark a spontaneous debate, if not an outright argument, it is a discussion involving politics—even among believers. As followers of Christ, what should be our attitude and our involvement with politics? It has been said that “ religion and politics don’t mix.” But is that really true? Can we have political views outside the considerations of our Christian faith? The answer is no, we cannot. The Bible gives us two truths regarding our stance towards politics and government.

The first truth is that the will of God permeates and supersedes every aspect of life. It is God’s will that takes precedence over everything and everyone (Matthew 6:33). God’s plans and purposes are fixed, and His will is inviolable. What He has purposed, He will bring to pass, and no government can thwart His will (Daniel 4:34-35). In fact, it is God who “sets up kings and deposes them” (Daniel 2:21) because “the Most High is sovereign over the kingdoms of men and gives them to anyone he wishes” (Daniel 4:17). A clear understanding of this truth will help us to see that politics is merely a method God uses to accomplish His will. Even though evil men abuse their political power, meaning it for evil, God means it for good, working “all things together for the good of those who love him, who have been called according to his purpose” (Romans 8:28).

Second, we must grasp the fact that our government cannot save us! Only God can. We never read in the New Testament of Jesus or any of the apostles expending any time or energy schooling believers on how to reform the pagan world of its idolatrous, immoral, and corrupt practices via the government. The apostles never called for believers to demonstrate civil disobedience to protest the Roman Empire’s unjust laws or brutal schemes. Instead, the apostles commanded the first-century Christians, as well as us today, to proclaim the gospel and live lives that give clear evidence to the gospel’s transforming power.

We Christians are to obey the laws of the land UNLESS it conflicts with the Word of God!

There is no doubt that our responsibility to government is to obey the laws and be good citizens (Romans 13:1-2). God has established all authority, and He does so for our benefit, “to commend those who do right” (1st Peter 2:13-15). Paul tells us in Romans 13:1-8 that it is the government’s responsibility to rule in authority over us—hopefully for our good—to collect taxes, and to keep the peace. Where we have a voice and can elect our leaders, we should exercise that right by voting for those who best demonstrate Christian principles.

One of Satan’s grandest deceptions is that we can rest our hope for cultural morality and godly living in politicians and governmental officials. A nation’s hope for change is not to be found in any country’s ruling class. The church has made a mistake if it thinks that it is the job of politicians to defend, to advance, and to guard biblical truths and Christian values. The job of a politician is to UPHOLD and Defend the laws of the land and to make sure our rights are not stripped away from us!

The church’s unique, God-given purpose does not lie in political activism.

Nowhere in Scripture do we have the directive to spend our energy, our time, or our money in governmental affairs. Our mission lies not in changing the nation through political reform, but in changing hearts through the Word of God. When believers think the growth and influence of Christ can somehow be allied with government policy, they corrupt the mission of the church. Our Christian mandate is to spread the gospel of Christ and to preach against the sins of our time. Only as the hearts of individuals in a culture are changed by Christ will the culture begin to reflect that change.

Believers throughout the ages have lived, and even flourished, under antagonistic, repressive, pagan governments.

This was especially true of the first-century believers who, under merciless political regimes, sustained their faith under immense cultural stress. They understood that it was they, not their governments, who were the light of the world and the salt of the earth. They adhered to Paul’s teaching to obey their governing authorities, even to honor, respect, and pray for them (Romans 13:1-8). More importantly, they understood that, as believers, their hope resided in the protection that only God supplies. The same holds true for us today. When we follow the teachings of the Scriptures, we become the light of the world as God has intended for us to be (Matthew 5:16).

Political entities are not the savior of the world.

The salvation for all mankind has been manifested in Jesus Christ. God knew that our world needed saving long before any national government was ever founded. He demonstrated to the world that redemption could not be accomplished through the power of man, economic strength, military might, or politics. Peace of mind, contentment, hope, and joy—and the salvation of mankind—are provided only through Jesus’ death and resurrection. Adapted from: Got Questions