What one generation allows in moderation, the next will practice it in excess! – ME, Jon Watkins

1st Corinthians 6:18-20 “Flee fornication. Every sin that a man doeth is without the body; but he that committeth fornication sinneth against his own body. 19 What? know ye not that your body is the temple of the Holy Ghost which is in you, which ye have of God, and ye are not your own? 20 For ye are bought with a price: therefore glorify God in your body, and in your spirit, which are God’s.”

1st Corinthians 10:13 “There hath no temptation taken you but such as is common to man: but God is faithful, who will not suffer you to be tempted above that ye are able; but will with the temptation also make a way to escape, that ye may be able to bear it.” 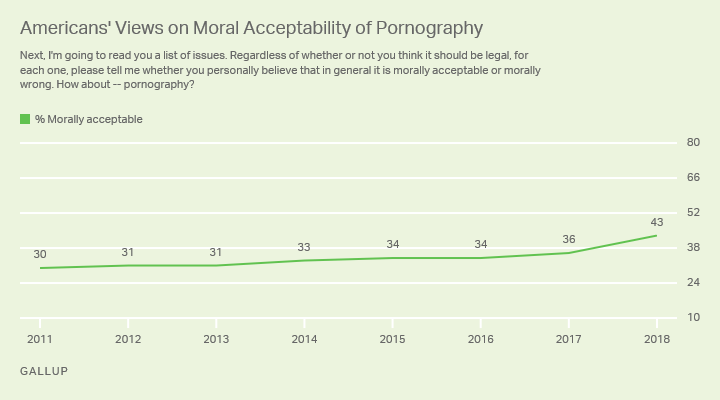 These results come from Gallup’s annual Values and Beliefs survey, conducted May 1-10. Since it was first fielded in 2001, this survey has found considerable evidence that Americans are becoming increasingly liberal in terms of what actions or behaviors they find morally acceptable.

From 2011 onward, notable shifts in opinion are apparent for actions such as doctor-assisted suicide, gay/lesbian relations, sex between unmarried people and having a baby out of wedlock.

Until this year, though, Americans’ perceptions regarding the morality of pornography have changed at a more modest rate than these other issues. From 2011 to 2017, the percentage of Americans who find pornography morally acceptable rose by six points, whereas Americans’ opinions on those other issues changed by an average of nine points.

But in light of this year’s seven-point shift, perceptions that pornography is morally acceptable have increased more than any of the 16 other behaviors or practices Gallup has measured over the time span of 2011-2018.

Acceptance of Pornography Spikes Among Democrats

For the first time on record, a majority of Democrats (53%) say pornography is morally acceptable. Last year, this figure stood at 42%. Democrats’ acceptance of pornography has grown by 21 points since 2011.

Forty-five percent of independents say this year that pornography is morally acceptable, a five-point increase from last year. Overall, independents’ views on the morality of pornography have been relatively stable since 2011. 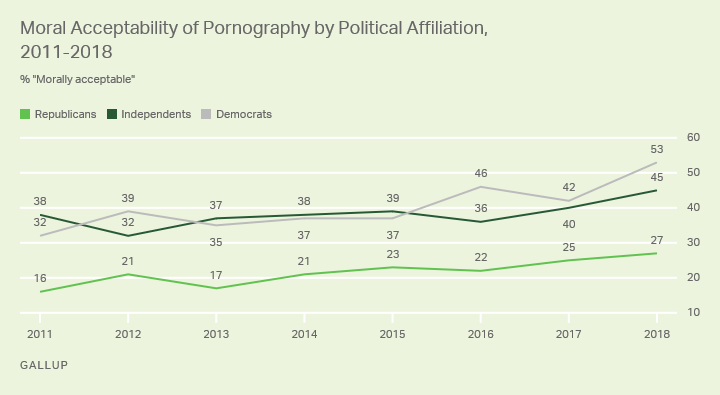 The partisan gap on the morality of pornography widened slightly this year (to 26 points), largely because of the sizable change in Democratic attitudes. Why Democrats’ attitudes shifted is less clear. While Democrats have become increasingly socially liberal, the percentage of Democrats who describe themselves as socially liberal this year is essentially unchanged from the year before.

Another explanation is that Stormy Daniels, adult film star actress and fierce critic of President Donald Trump, has given pornography a sense of moral credibility that it previously lacked.

Compared with a number of demographic traits or characteristics that help shape a person’s moral perceptions of pornography — including gender, age, importance of religion in one’s life and marital status — two subgroups saw a big year-over-year spike in the their acceptance of pornography. These are non-married individuals and men aged 18 to 49. 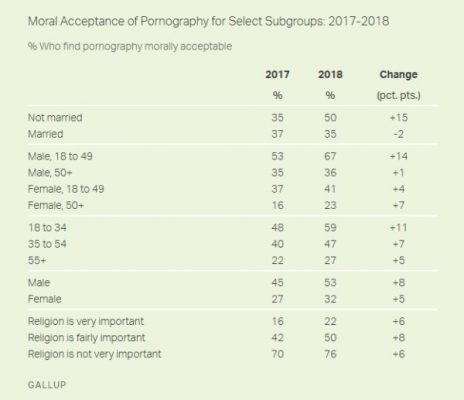 Americans’ views regarding the moral acceptability of pornography, which remained relatively stable for much of this decade, rose significantly this year. Why moral perceptions of pornography changed so dramatically this year is difficult to assess, but the larger trend is easier to understand.

Across a number of issues related to sexuality and sex, Americans have — at either a gradual or a quick rate — been adopting a more permissive viewpoint, including such behaviors as sex between unmarried people and gay/ lesbian relations. Even behaviors that most Americans still consider beyond the pale, such as polygamy, have seen a notable increase in acceptability. In this context, it is hardly surprising that a similar change would be observed with respect to perceptions of pornography.

The cause of the single-year shift on this item, though, is less clear. It may represent something of an outlier, in which case acceptance of pornography would be expected to decrease next year, even if it remains above the 2017 level. Or the shift, though principally driven by a structural trend, may been have been exacerbated by political factors, such as the public battle between Stormy Daniels and the president.