You can bet if it was a White woman beheading a Black child the Communist Left would think the world was ending and cities would be looted and burned! 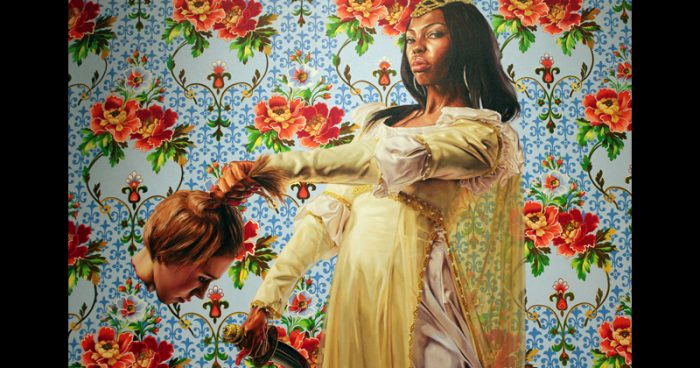 Kit Daniels – Kehinde Wiley, the artist behind the new portrait of President Obama, portrayed the beheading of a white girl by a black woman in a 2012 painting:

According to art critic thejonellaqueen:

This art piece “Judith Beheading Holofernes,” 2012, Kehinde Wiley, places Women of Color, specifically a Black woman in a position of power (and majesty). This is so important because of the racism and sexism that Women of Color have historically and continue to face today. (Not to mention other WOC who face marginalization because of other facets of their identity; SES, Queerness, Ability, trauma(s) in addition to this- the list goes on).

And here’s a GIF of Wiley’s portrait of Obama:

It’s ironic how Wiley was chosen to paint Obama, the president who was routinely accused of fueling racial divisions to justify more federal control of local police.

As president, Obama often inserted himself into heated debates with comments that only seemed to exacerbate racial tensions, such as the time he claimed Trayvon Martin, who was shot by neighborhood watchman George Zimmerman during an altercation, could have been his son.

Obama’s strategy was simple: How can the public fight the power structure screwing them over if they’re too busy fighting their neighbors?

Remember, Obama is a member of the Trilateral Commission which wants greater control over US policy, and what better way to control Americans than to get them divided and fighting amongst themselves?