The following article was originally posted on a website called The Fellowship of God’s Covenant People and the article was written by Pastor Don Elmore January 4th 2015. This article was so informative and so well constructed that I am presenting it to you as close to the original document as possible. Some time references/tenses have been updated and some photos were not accessible. I tried to recreate the original photos as closely as I could. Videos were added by me.
TomorrowLand
Everyone has heard of Tomorrowland at Walt Disney’s five theme parks that are all over the world. I’m sure that Joyce and Tom have been there many times. At the dedication of his first Tomorrowland, Walt Disney had these words to say on July 17, 1955:
“A vista into a world of wondrous ideas, signifying Man’s achievements…A step into the future, with predictions of constructed things to come. Tomorrow offers new frontiers in science, adventure and ideals. The Atomic Age, the challenge of Outer Space and the hope for a peaceful, unified world.”

And Disney Studios made a motion picture, which come out in May, 2015, also titled “Tomorrowland” starring George Clooney. In the preview it says, “What if there is a place, a secret place, where nothing is impossible. A miraculous place where you can actually change the world.”

It is the story of a teenage girl, a middle-aged man who is a genius (who was kicked out of Tomorrowland) and a young girl robot who attempted to get to and unravel what happened to Tomorrowland, which exists in an alternative dimension, in order to save Earth.

This Electric Music Festival has just completed its tenth year. It started in Boom, Belgium (At the time is was called Qlimax – full video below) and has since gone to three other locations: Atlanta, Georgia; South Africa and São Paulo, Brazil. It is looking to go to other countries.Qlimax is the RAVE that started it all. You must see this! Pray before you watch it.


Please note that as you face the stage, you are staring into the eyes of a snake. Remember all the Disney movies where characters that looked into the eyes of the snake would be hypnotized? Watch the light show. Also, notice at the top of the stage, there are devil horns.

At the 10th anniversary edition of TomorrowLand this past July in Belgium, French super star–DJ David Guetta announced that in 2015, TomorrowLand would take place in Brazil for the very first time. During the announcement, over 15,000 Brazilians watched the live stream from Belgium in Candido Portinari Park (Villa-Lobos Park) in São Paulo, so the news of the first Brazilian edition of TomorrowLand spread like wildfire to every corner of this beautiful country and abroad.

That Brazilians in particular were wildly enthusiastic was made abundantly clear not only on social media, but also in the massive number of pre-registrations for tickets. When ticket sales for the festival opened, barely a few hours later, all 180,000 tickets were sold out. Never before in the history of Brazilian festivals, did any event sell out this fast. 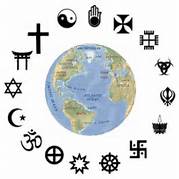 It’s the world’s unifying religion. It doesn’t use any Scripture at all. Who celebrated Christmas (Easter, Valentines, Halloween)? The vast majority of the people of the earth. Who thinks that the electronic music festival is the closest thing to God? Many who just finished celebrating the birthday of the false Jesus.
May God have mercy on His wicked covenant people as we approach the end of this age.
Blessed be the LORD God of Israel. Source
(The only way you can UNITE all Religions is to NEGATE all Faith.)
Addition not part of the original article:
*face in a book display at center stage,* The face in a book declares itself to be the “Book of Wisdom”. The attendees of these Raves are under the influence of drugs and alcohol, hypnotized by the lights, sights, sounds, smells and the rhythmic electro beats of the drums. In this nearly catatonic state, this automated face preaches the new world agenda and the satanic pagan lifestyle and they suck it in like sponges. This is their CHURCH! The robotic preacher and the wanton music promoting sexual perversion. You can see that they follow the commands of the leaders with blind obedience!Opening The Book Of Wisdom + Intro Hardwell @ Tomorrowland 2012TomorrowWorld 2013 – The Opening of the Book