The ROBOT PRIEST is certainly not the first time that Technology and Religion have been merged. Check out some of these earlier occurrences:

Before Day of Atonement, confess sins to a digital goat

The Web site eScapegoating lets you anonymously share your sins with the digital world. It’s like PostSecret for the Yom Kippur set.

In Biblical times, Jews would cast away their sins once a year by ceremonially transferring them to a goat. Most people are way less likely to stumble upon a goat in daily life in 2013 (at least on the streets of San Francisco), but a cute Internet-dwelling cartoon variety has appeared to help bear the burden.
“Atone with the eScapegoat,” declares the Web app of the same name. “Like in Biblical times, only nerdier!”
Created by G-dcast, a San Francisco-based media production company aimed at raising Jewish literacy through whimsical interactive technology, eScapegoat collects anonymous confessions submitted by digital visitors. It then broadcasts them on the site, along with entertaining illustrations, passing some along to the @sinfulgoat Twitter feed. Think of it as a PostSecret for the Yom Kippur set. Source: By Leslie Katz of CNet. 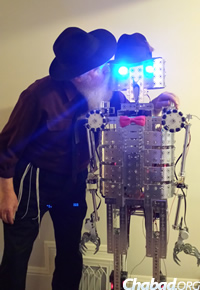 Traditional Jewish symbolism gets a sci-fi twist as Isaac the robot helps light a San Francisco public menorah on the seventh night of Hanukkah.

On the seventh night of Hanukkah, 2013, when Rabbi Yosef Langer lit a 22-foot menorah in San Francisco’s Union Square, he got a helping hand — an aluminum helping hand,– from Issac the humanoid.The 5.5-foot humanoid was responsible for lighting the shamash (the helper flame used to kindle the candelabrum’s other lights) on the 3-ton “Mama Menorah,” a fixture at San Francisco’s annual public Hanukkah candle lighting since 1975. In doing so, Issac, namesake of sci-fi author Isaac Asimov, brought a decidedly geeky gild to the decades-old proceedings.Ken Goldberg, the artist and UC Berkeley robotics professor responsible booking Isaac the Robot for the Hanukah Ceremony stated “Menorahs represent the past and robots represent the future. Rabbi Langer and I have a hunch that a ritual that brings them together will generate some interesting new sparks.”Created by David Calkins, a former robotics professor at San Francisco State University and current head of the Robotics Society of America, the bot runs on a Lego Mindstorm programmable robotics platform; maneuvers with the help of motors and sensors; and can deliver an audible “hello” and “thank you” thanks to a speaker in his back.Asked whether a robotic candle lighter conflicts with Jewish law in any way, Langer told CNET that “I think the coast is clear. I’ve cleared it with the rabbinical authorities and they say, ‘Yeah, why not? Why not a robot?’ Robots do wondrous, miraculous things in this world.”
Interestingly, I Robot was written by Isaac Asimov Source

“Robots were created to assist in doing good deeds in this world,” says Langer. Source

The Rabbi, The Robot and The Burning Bush:

Chabad of S.F. partnering with Silicon Valley 2013
Art & Tech community for a most unorthodox 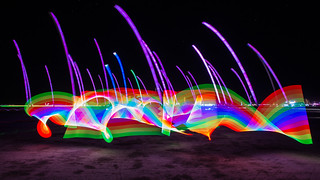 An LED sculpture with 30-foot-tall glowing, bending tubes will sway like a 21st century techno version of the biblical burning bush. Local artist and mechanical engineer Mauricio Bustos reconfigured the sculpture, titled “seaGrass,” from its days at Burning Man. Interesting…as burning man is a Celtic Ritual

Every year at San Francisco’s public menorah lighting, Langer asks who in the crowd needs a miracle or knows someone who does. Many raise their hands. This year, he’s asking people to write down what they need. Local artist John Baden has created three large-scale “Miracle Vessels” to hold celebrants’ miracle-seeking messages, which can be dropped off the old-fashioned, in-person way, or, not surprisingly, the digital way: via e-mail at miraclelightnow@gmail and tweet at @miraclelightnow.

Got a Jewish Robot, A Christian Robot, How about a Buddhist Monk Robot!

Robot monk to spread Buddhist wisdom to the digital generation

At an ancient Chinese temple, Xian’er can chant mantras and answer questions about his faith via a touch-screen display

He started his existence as a cartoon drawn by Xianfian when he joined the temple in 2011. Xianfian described Xian’er as “a reflection of innovative Buddhist spirit … [who] might help traditional Buddhism reach a wider public more easily.” He became Xianfan’s 2013 cartoon creation of the same name. The Cartoon series was entitled Trouble, You Seek for Yourself. The temple has produced books and merchandise featuring the robo-monk, all in an effort to marry Buddhist philosophy with current culture. The robot was developed by a tech company and artificial intelligence experts from a few of China’s top universities, and while Xian’er was just unveiled in October (2015), a new model with even more functionality is already being developed. Source

His purpose is to reach out to people who are more connected to their smartphones than their inner being. Xian’er can answer 20 simple questions, displayed on the touch-screen on his chest, about Buddhism and daily life at the 500-year-old temple.

Master Xianfian, a (human) monk at Longquan and Xian’er’s creator, said artificial intelligence could be harnessed to spread Buddhist wisdom in China.

“Science and Buddhism are not opposing nor contradicting, and can be combined and mutually compatible,” he told Reuters.

Buddhism filled a gap in a fast-paced, hi-tech existence, he added. “Buddhism is something that attaches much importance to inner heart, and pays attention to the individual’s spiritual world … I think it can satisfy the needs of many people.” Source

In my research I came across some videos that talked about how most of the monks at the Temple responsible for creating the Robot Monk, are young college graduates. Most of them have degrees in Technology and Rocket Science. You can find some of that information covered in the videos available HERE

Satan knows he can’t refute or challenge the Word of God. No, he tries to twist and distract like he did in the temptation of Jesus. I am sure this person is well meaning in what he is doing, but he has NO discernment and is actually leading lost souls further away from the truth and God.

This mandala melds religion and technology Peek at this technological twist on the mandala — a common symbol seen in Eastern religion — made of microchips and other miscellaneous electronic components.

Ulian, based in London, created the mandala with hundreds of microchips, circuits, resistors, and other components found within everyday electronics.

“I wanted to show what has been hidden from the eyes of the consumer, representing electronic circuits as extraordinary objects where the perfection of the design can become almost something ethereal,” Ulian said of his techy art in an interview with Colossal.

Anyone with even mild experience in soldering may recognize the unreal number of connection points in the near 4×4-foot mandala, which undoubtedly took a long time to perfectly solder, align, and assemble.

See more of Ulian’s creations in his personal portfolio, which includes several additional mandalas and other oddities

A mandala (Sanskrit: मण्डल, lit, circle) is a spiritual and ritual symbol in Hinduism and Buddhism, representing the universe.[1] In common use, “mandala” has become a generic term for any diagram, chart or geometric pattern that represents the cosmos metaphysically or symbolically; a microcosm of the universe.

The basic form of most mandalas is a square with four gates containing a circle with a center point. Each gate is in the general shape of a T. Mandalas often exhibit radial balance.
The term appears in the Rigveda as the name of the sections of the work, but is also used in other religions and philosophies, particularly Buddhism

In various spiritual traditions, mandalas may be employed for focusing attention of practitioners and adepts, as a spiritual guidance tool, for establishing a sacred space, and as an aid to meditation and trance induction.

The entire purpose behind all of this is to create more of a division between us and our humanity. To bring us further into the merging of man and machine. To condition us to the monotonous tones of the robotic voice. To hypnotize us with the visuals of lights and movements. To guide us into a trans like state where we are totally submissive and controllable. It is WITCHCRAFT!

Editing and additions by Cynthia Pawl