They have their timing way off, but what do you expect out of Atheists?

‘This conclusion is very surprising,’ Thaler admitted, ‘and I fought against it as hard as I could.’ 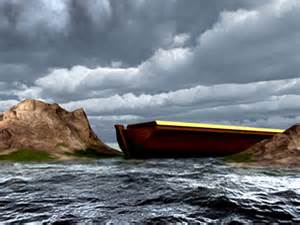 All humans are descended from just TWO people and a catastrophic event almost wiped out ALL species 100,000 years ago, scientists claim

Scientists surveyed the genetic ‘bar codes’ of five million animals – including humans – from 100,000 different species and deduced that we sprang from a single pair of adults after a catastrophic event almost wiped out the human race.

These bar codes, or snippets of DNA that reside outside the nuclei of living cells, suggest that it’s not just people who came from a single pair of beings, but nine out of every 10 animal species, too

Stoeckle and Thaler, the scientists who headed the study, concluded that ninety percent of all animal species alive today come from parents that all began giving birth at roughly the same time, less than 250 thousand years ago – throwing into doubt the patterns of human evolution.

‘This conclusion is very surprising,’ Thaler admitted, ‘and I fought against it as hard as I could.’

The new report from experts at the Rockefeller University along with from the University of Basel published the extraordinary findings in Human Evolution.

They mined ‘big data’ insights from the world’s fast-growing genetic databases and reviewed a large literature in evolutionary theory, including Darwin.

Dr Stoeckle said: ‘At a time when humans place so much emphasis on individual and group differences, maybe we should spend more time on the ways in which we resemble one another and the rest of the animal kingdom.’

The conclusions throw up considerable mystery as to why the need for human life to start again was needed such a relatively short time ago, especially since the last known extinction we know of was during the time of the dinosaurs 65 million years ago.

This opens up the possibility of an inbuilt human evolutionary process wherein we break down and die out, leaving the need to start from scratch.  Read more here

These Clowns just can’t bring themselves to admit they just proved the Biblical Event of the Flood! Their timing is off, but they have to dance around and will not say they have found scientific evidence that proves it.

Lay aside the human evidence for a moment and look at what they said about the animals. “The research deduced that humans and animals sprang from single pair”! What does the Word of God say?

Genesis 7:6-9 “And Noah was six hundred years old when the flood of waters was upon the earth. 7 And Noah went in, and his sons, and his wife, and his sons’ wives with him, into the ark, because of the waters of the flood. 8 Of clean beasts, and of beasts that are not clean, and of fowls, and of every thing that creepeth upon the earth, 9 There went in two and two unto Noah into the ark, the male and the female, as God had commanded Noah.”

There you have it folks! A pair of animals male and female to repopulate the earth. Also note they were male and female which should end the homosexual, Tranny, Non-Gender debate!

Oh, and there is no “break down and die out, leaving the need to start from scratch”! However, God DID start from scratch with a Pre-Adamic race of people that Satan corrupted, and that was when “extinction we know of was during the time of the dinosaurs 65 million years ago”!

And guess what bit of news just came out!

Noah’s Ark has been discovered on top of a mountain in Iran after petrified wooden beams were found on the summit, according to the latest conspiracy theories.

Researchers from the Bible Archaeology, Search & Exploration Institute claim there is strong evidence that the ship is on the mountain of Takht-e-Suleiman.

The BASE group says they found wood fragments at the 15,000-foot elevation and took the samples to be analyzed in a lab.

The lab found the fragments showed signs of petrified wood.

Furthermore, they found microscopic sea life in a rock sample, which is normally found at the bottom of the ocean.

The BASE group said: “The research and site survey being investigated by the BASE Institute has strong potential.”

“Is it the remains of Noah’s Ark? The BASE Institute does not make the claim that we have found Noah’s Ark. We’ll let you draw your own conclusions.” Read more here