Police and church officials told Morning Star News that four suicide attackers stormed the Bethel Memorial Methodist Church in the provincial capital, Quetta, in the southwestern part of the country.

“There were around 400 worshippers inside the church when the attack began,” the senior leader of the church, who identified himself only as Pastor Samuel, told Morning Star News, adding that the church was holding a “Sunday School Christmas Program” at the time of the attack.

Pastor Samuel said that police assigned to the church’s security reacted timely, averting a much larger tragedy, as one suicide attacker was shot dead after an exchange of fire with police while the other detonated his explosive-packed jacket before being able to enter the main prayer hall.

Their two accomplices fled the scene during the exchange of fire.

“The loss of lives would have been colossal had either of the two suicide bombers detonated inside the church hall,” Pastor Samuel said. “Zarghoon Road is a very sensitive area, and the church is already listed in the A+ category of high threat places.”

Police guards deployed at the main gate and on the roof opened fire on the terrorists when one of them scaled the church gate and opened it for his accomplice, he said.

“Our church gatekeeper, George Masih, was the first person who fell to the terrorists’ bullets,” he said.

The congregation erupted in panic as soon as the shots rang out in the church compound, he said. 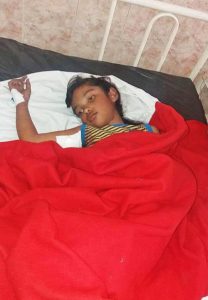 “We immediately asked the people to take shelter beneath the benches, as we were not sure about the attackers’ location,” the pastor said. “Many panic-stricken people rushed towards the main door and that’s when the second bomber exploded his jacket in the compound, resulting in the casualties.”

Broken wooden benches, shards of glass and musical instruments were scattered around a Christmas tree inside the prayer hall that was splashed with blood stains.

Sunil Pervaiz, who was present in the church with his sister when the attack happened, told Morning Star News that the congregation was busy worshipping when the firing started.

“We hid the women and children under the benches, but just then a deafening explosion occurred, breaking the wooden door and the glass windows,” Pervaiz said. “I saw several people covered in blood … some were lying on the floor, some limping away to safety. It was sheer chaos.”

Aqil Anjum, who was shot in his right arm, said bullets were hitting people inside the closed hall.

“The situation was so chaotic that my mind had numbed,” he said. “My condition was such that I initially didn’t even feel the bullet piercing my arm.”

“I am thankful to God Almighty that my son is alive, but my heart grieves for the families of our congregation who have lost their loved ones today,” she said. “The church was brimming with activity for the pre-Christmas Mass, and we all were very excited to be there, but our happiness has been turned into sadness.”

According to Balochistan Police Chief Moazzam Ansari, the injuries resulted mainly from wooden splinters from the door and from glass blown out of the church’s windows in the explosion.

Ansari praised the quick response of the police guards posted to the church, which he said had prevented the attackers from causing maximum damage.

The assailants were between 16 and 20 years old and had strapped 15 kilograms of explosives to their bodies. One successfully detonated his explosive vest, while the other was defused, Ansari said, adding that two other attackers fled without putting up a fight. Authorties are searching for them.

The Islamic State, also known by its Arabic acronym Daesh, claimed responsibility for the attack, the group’s Amaq news agency said in an online statement, without providing any evidence for its claim.

The Bethel Memorial Church was the target of a previous terrorist attack. Security had been beefed up for the church after the last attack, which occurred a few years ago. The church is located in the city’s high-security zone.

Jacob Masih, another worshipper, said that the attack occurred so suddenly that the congregation was thunder-struck.

“People started running to the corners of the church when the firing started,” he told Morning Star News. “All of this happened very quickly, leaving most of us in a state of shock and disbelief. Many, including myself, thought that it was the last day of our lives.”

Sidra Shams, a member of the church, said that several children participating in the Sunday school program remained safe while firing continued around them.

The church attack came a day after the third anniversary of a Taliban attack on an army-run school in Peshawar in the northwestern province of Khyber Pakhtunkhwa that killed 144 persons, mostly schoolchildren, one of the single deadliest attacks in the country’s history.

Christian political and religious leaders condemned the attack and urged the government to provide maximum security to churches across the country for Christmas services next week.

Rufus Solomon of the opposition Pakistan Tehreek-e-Insaf (PTI) said that terrorist attacks would not cease in Pakistan until the country implements the National Action Plan in letter and spirit.

“The government came up with the national plan against terrorism and extremism after the Peshawar school attack, but not much has been done regarding its implementation,” he said. “This lethargy is costing precious human lives, but sadly the government remains unconcerned, and a traditional condemnatory statement is issued after every attack.”

Solomon said that the Quetta attack has sent shockwaves throughout Pakistan’s Christian community and dampened the festive season.

“The government must ensure special protection for churches as Christmas approaches,” he said. “My prayers go to the victims’ families and for the speedy recovery of the injured.”

The senior-most bishop of the Anglican Church of Pakistan, Alexander Malik, condemned the attack, saying he hoped the government would put in place extra security at all churches to avoid a similar catastrophe.

“Today is a very sad day, as several families have lost their loved ones, while many others are left tending for their injured just a week before Christmas,” Malik said. “My heart grieves for their loss, and I pray that God may grant them patience and courage in this time of grief.”

He urged Christians in Pakistan the world over to keep the grieving families in their prayers.

Christians make up 2 percent of Pakistan’s population and face persecution from hard-line Islamists who want to see a strict interpretation of Islamic law take precedence in the legal system.

A 7-year-old boy and two others were killed earlier in December during a hand grenade attack on the gates of a Christian colony in Chaman in Balochistan. The victim was identified as Lucky Saleem. No group has yet claimed responsibility for the attack.

Pakistan ranked fourth on Christian support group Open Doors’ 2017 World Watch List of the 50 countries where it is most difficult to be a Christian.