The LGBTQPXYZ crowd need to take a lesson from the Muslims.

The enemy of my enemy is my friend is an ancient proverb which suggests that two opposing parties can or should work together against a common enemy. Source 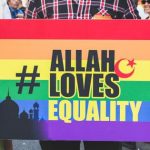 That is what the Muslims, Sunni and Shia, who war with each other constantly do. It seems that the Muslims can lay aside their hate for each other, but the Queers can not. Their hatred for President Trump is rooted to deep! Maybe the Jinn demons are less vile than LGBTQPXYZ demons!

“Cut your nose of to spite your face”… “Bite the hand that feeds you”… “A blind person who sees is better than a seeing person who is blind”… “A closed mouth catches no flies”… “A person who desires revenge should dig tow graves”, and there are many, many more that could be quoted that describe these people. The Bible calls them FOOLS!

These activists can’t get out of their own way. When AFDI ran ads highlighting the mistreatment of gays in Islamic law, the San Francisco Board of Supervisors issued a resolution condemning not that mistreatment, but our ads. Gay advocates such as Theresa Sparks and Chris Stedman attacked us for daring to call attention to the institutionalized mistreatment of gays under Islamic law. It was that, or risk not being invited to the best parties.

You just can’t make this stuff up. Because in 2019, the truth really is stranger than fiction.

Out Magazine, a pro- LGBT news publication that doubles as a gay advocacy platform, actually published a piece Wednesday claiming that it’s – stay with me here – “racist” for the Trump administration to pressure nations like Iran to decriminalize homosexuality.

Again, you can’t make this stuff up, so I’ll let Out’s Matthew Rodriguez do the talking for me. In his article, entitled, “Trump’s Plan to Decriminalize Homosexuality Is an Old Racist Tactic,” Rodriguez states:

There are several signs that this decision is denoted in a colonial sense of paternalism rather than any true altruism. According to the report, the decriminalization campaign is set to begin in Berlin where LGBTQ+ activists from across Europe will meet to hatch a plan that is “mostly concentrated in the Middle East, Africa, and the Caribbean.”

That sentence alone should set off several alarm bells. First of all, the Middle East, Africa, and the Caribbean are huge geopolitical entities. Attitudes toward gay people differ greatly among countries and regions within those entities and attempting to gather a room of European activists on how to deal with queer issues in those regions is the definition of paternalism.

The initiative Rodriguez is referring to is a newly announced plan spearheaded by U.S. Ambassador to Germany Richard Grenell (who’s openly gay) to gather Western world leaders in denouncing dozens of nations including Iran for laws that criminalize or even carry the death penalty for being gay. By pressing the issue, experts have noted that Trump runs the risk of straining otherwise positive U.S. relations with certain nations like Saudi Arabia, Pakistan and the United Arab Emirates….