God’s City has a Wall, 12 gates and a Very Strict Immigration policy. Hell has Open Borders and a Wide Open Gate!

What will be the purpose of the walls around the New Jerusalem? 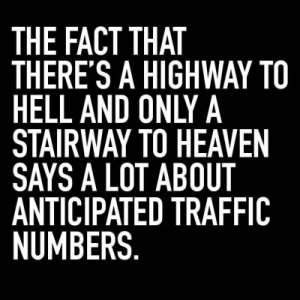 Beginning with Revelation 21:9, John records his final vision picturing the city of God, the New Jerusalem where believers in Christ will spend their eternal lives. The New Jerusalem is the ultimate fulfillment of all of God’s promises. It exemplifies the total goodness of God, its infinite brilliance “like that of a very precious jewel, like as jasper, clear as crystal” (Revelation 21:11). It is here that Scripture gives us a description so magnificent that we are able to get a glimpse of the glories of eternal heaven. In this passage, an angel of God has taken John to the top of a great and high mountain. From there John looks down upon this Holy City and tries to describe the indescribable. The city is like a massive, crystal-clear diamond with the glory of God shining from its center over all the new heavens and the new earth. All of eternity is bathed in its splendor.

Then in verse 12, John moves from describing its general appearance to its exterior design beginning with the walls. Human words are incapable of describing what John is trying to convey, which is why he continually uses similes, saying often “it is like” something else. But he gives us just enough to excite our hearts and stir our souls. God, through John, gets us as close to the understanding of this place as our finite minds can comprehend.

The walls of the city, described as “great and high,” are an obvious symbol of exclusion of all that are unworthy to enter the city. Though innumerable believers will enjoy its glory, there is the chilling reminder that only the redeemed may enter. In the wall itself are twelve gates guarded by twelve angels and inscribed with the names of the twelve tribes of Israel. In keeping with the square shape of the city, the gates are located on each of the four sides as specified in verse 13. It is noteworthy, however, that not only are the twelve apostles represented but also the twelve tribes of Israel. This should settle beyond any question the matter of the inclusion of Old Testament saints. It apparently is the divine intent to represent that the New Jerusalem will have among its citizens not only believers of the present age, but also Israel and the saints of other ages, all of whom make up the Church of Jesus Christ.

But a final question remains: if those within the walls of the New Jerusalem are the saved, who then are those outside its walls? The last three verses of chapter 21 gives us the answer: “On no day will its gates ever be shut, for there will be no night there. The glory and honor of the nations will be brought into it. Nothing impure will ever enter it, nor will anyone who does what is shameful or deceitful, but only those whose names are written in the Lamb’s book of life” (Revelation 21:25-27). The city’s gates in the wall will never be shut. It is not that outside of the New Jerusalem, unsaved people are still roaming around, but this pictures a city with open gates on a new earth where believers will dwell throughout eternity. Ancient cities shut their gates at night for security purposes. However, since there will be no night there, and since all evil will have been eradicated, these gates will stay open constantly. Revelation seems to picture a great amount of activity coming and going from the city, but all who go in and out are those redeemed by the blood of the Lamb. The unredeemed are a long way outside the city’s walls—in the “outer darkness” of hell (Matthew 8:12), consigned to the lake of fire (Revelation 20:14-15)—and can never come near the Holy City.

Jesus Himself, as well as John, specifies the “impure” as those who will not enter the city: “Outside are the dogs who practice magic arts, the sexually immoral, the murderers, the idolaters, and everyone who loves and practices falsehood” as well as the “cowardly, the unbelieving, the vile, and all liars” (Revelation 22:15). By contrast, those people whose names are recorded in the Lamb’s book of life are free to enter the Holy City; they possess life eternal and belong to their faithful Savior Jesus Christ. The Lamb, who bought them with His blood (Rev. 5:9), will never blot out their names from His book (Revelation 3:5) and will grant them the right to the tree of life and entrance into the city (Revelation 22:14).

Though the description of the city does not answer all our questions concerning the eternal state, the revelation given to John describes a beautiful and glorious future for all who put their trust in the living God. Conversely, it reveals to us that when the end does come, no opportunity will remain for one’s repentance and acceptance into heaven. The truth is this: spiritual renewal takes place in this present life, not in the afterlife. Source: Got Questions

We wholeheartedly believe that Christians are called to be compassionate and merciful toward immigrants (Exodus 22:21; Leviticus 19:33–34; Matthew 25:35). We also believe that the United States should have a more compassionate and merciful immigration policy. However, that is not the question at hand. The question at hand concerns illegal immigration—whether it is wrong to violate a nation’s borders and transgress its immigration laws.

Romans 13:1–7 makes it abundantly clear that God expects us to obey the laws of the government. The only exception to this is when a law of the government forces us to disobey a command of God (Acts 5:29). Illegal immigration is the breaking of a government’s law. There is nothing in Scripture that contradicts the idea of a sovereign nation having immigration laws. Therefore, it is rebellion against God to unlawfully enter another country. Illegal immigration is a sin.

Illegal immigration is definitely a controversial issue in the United States (and some other countries) today. Some argue that the immigration laws are unfair, unjust, and even discriminatory—thus giving individuals justification to immigrate illegally. However, Romans 13:1–7 does not give any permission to violate a law just because it is perceived as unjust. Again, the issue is not the fairness of a law. The only biblical reason to violate a government’s law is if that law violates God’s Word. When Paul wrote the book of Romans, he was under the authority of the Roman Empire, led by Emperor Nero. Under that reign, there were many laws that were unfair, unjust, and/or blatantly evil. Still, Paul instructed Christians to submit to the government.

Are the immigration laws of the United States unfair or unjust? Some think so, but that is not the issue. All developed countries in the world have immigration laws, some more strict than the USA’s, and some less strict, and all have to deal with illegal immigration. There is nothing in the Bible to prohibit a country from having completely open borders or to have completely closed borders. Romans 13:1–7 also gives the government the authority to punish lawbreakers. Whether the punishment is imprisonment, deportation, or even something more severe, it is within the rights of the government to determine.

Illegal immigration is a complex issue. The vast majority of illegal immigrants in the United States have come for the purpose of having a better life, providing for their families, and escaping poverty. These are good goals and motivations. However, it is not biblical to violate a law to achieve a “good.” Caring for the poor, orphans, and widows is something the Bible commands us to do (Galatians 2:10; James 1:27; 2:2–15). However, the biblical fact that we are to care for the unfortunate does not mean we should violate the law in doing so. Supporting, enabling, and/or encouraging illegal immigration is, therefore, a violation of God’s Word. Those seeking to emigrate to another country should always obey the immigration laws of that country. While this may cause delays and frustrations, it is better than acting illegally. A frustrating law is still a law.

What is the biblical solution to illegal immigration? Simple—don’t do it; obey the laws. If disobedience is not a biblical option, what can be done in regards to an unjust immigration law? It is completely within the rights of citizens to seek to change immigration laws. If it is your conviction that an immigration law is unjust, do everything that is legally within your power to get the law changed: pray, petition, vote, peacefully protest, etc. As Christians, we should be the first to seek to change any law that is unjust. At the same time, we are also to demonstrate our submission to God by obeying the government He has placed in authority over us.

“Be subject for the Lord’s sake to every human institution, whether it be to the emperor as supreme, or to governors as sent by him to punish those who do evil and to praise those who do good. For this is the will of God, that by doing good you should put to silence the ignorance of foolish people. Live as people who are free, not using your freedom as a cover-up for evil, but living as servants of God” (1 Peter 2:13–16). Got Questions