Why you make HIM the Mental Health Official of Pennsylvania so HE can do irreparable mental damage to  the entire state!

Update 6/5: PA Health Secretary Twists Himself Into a Pretzel Trying to Justify Limitless BLM Protests While Standing by COVID-19 Restrictions For Small Businesses 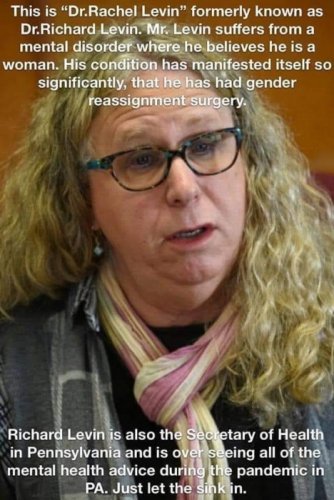 If you don’t fight with them and just expose their Shenanigans, this will be the result.

Matthew 15:14 “Let them alone: they be blind leaders of the blind. And if the blind lead the blind, both shall fall into the ditch.”

Sooner or later they will break the law and get ousted, or they will have a mental break down and possibly commit suicide. Romans 12:19 “Dearly beloved, avenge not yourselves, but rather give place unto wrath: for it is written, Vengeance is mine; I will repay, saith the Lord.”

Dr. Richard Levine aka Tranny Rachael Levine: is a Lunatic in charge of the insane asylum!

IT was placed there to indoctrinate children and to keep those who might try and buck the system and actually try to help get the demons of sexual perverts!

Life News January 2015 – Democratic Gov.-elect Tom Wolf named Dr. Richard Levine – who now goes by “Rachel” – as his pick for physician general on Saturday, at the same time as he announced three other proposed members of his cabinet.  If confirmed by the state Senate, Levine will become one of the highest-ranking transsexuals of any government body in the United States.

“Dr. Rachel Levine is well-respected in the fields of pediatrics, psychiatry, and behavioral health, where she [sic] has practiced for close to three decades,” Wolf said in a press release explaining his selection.  “She [sic] has been a leading voice in efforts to treat teens with medical and psychological problems, as well as adults and children with eating disorders. It is important to me that we place equal emphasis on behavioral and physical health issues. Dr. Levine will bring expertise and wide-ranging knowledge to this important role advising the secretary of Health and me on medical and public health matters.”

Levine, who has two teenage children with his ex-wife, Martha (they divorced in 2013 after 30 years of marriage) has spent most of his career treating eating disorders such as anorexia and bulimia, but since his decision to “come out” as transgender, he has been increasingly focused on homosexual and transgender activism.  He currently sits on the board of gay advocacy group Equality PA, and serves as the LGBT liaison for the Office of Diversity at Penn State Hershey, where he is a professor.  He previously served as the faculty advisor for the campus LGBT club, and founded a faculty-student mentoring program for people with same-sex attraction and gender identity issues. Read more here

And on that note….

Due to the misguided policy of forcing nursing homes to take back residents with COVID-19, there has been a disproportionately high rate of death among those living in these facilities.

Pennsylvania Health Secretary Dr. Rachel Levine, was questioned about why she had moved her mother out of a nursing home to a hotel when COVID-19 hit the state.

A reporter asked, “We’re hearing you moved your mother from a nursing home to a hotel. What message does that send to the thousands of Pennsylvanians whose parents are in nursing homes but maybe are unable to move them out…when the person in charge moves out their own parent.”

Levine, reading from prepared notes replied, “Well my mother is actually a resident of a personal care home — not a nursing home and that is regulated by the Department of Human Services, not the Department of Health. My mother requested — and my sister and I as her children complied to move her to another location during the COVID-19 outbreak. My mother is 95 years old. She is very intelligent and more than competent to make her own decisions.” Read more here

What Do You Do When Mental Health Professionals Treating Trump Derangement Syndrome Have TDS Themselves?

John Ellis | PJ Media – I must confess that the absurdities that are the product of the left’s Trump Derangement Syndrome continue to astound and amuse me. Neither response is probably good or helpful, though. At this point, I shouldn’t be astounded at the depths of stupidity to which leftists afraid of Donald Trump will descend. In a similar vein, I shouldn’t be amused by TDS because it has real-world consequences, but more on that in a bit. In a recent article, the Washingtonian laid bare, albeit unintentionally, the troubling levels of Trump Derangement Syndrome.

The article, titled “DC Types Have Been Flocking to Shrinks Ever Since Trump Won. And a Lot of the Therapists Are Miserable,” can be summed up with this frightening pull-quote:

The National Association of Social Workers’ code of ethics describes “social justice” as a primary core value of the profession, and all the social workers I spoke to (as well as many of the psychologists) viewed this work as fundamental: How can you heal an individual without also seeking to heal the culture?

In a nutshell, many of this country’s mental health providers believe that President Trump, and by extension conservatives, are an illness infecting our nation. Read more at PJ Media

Mental health toll of social isolation set to be substantial

Paul Watson | Summit News – Psychiatrists wrote 86% more prescriptions for psychotropic drugs, including antidepressants, during the lockdown months of March and April compared to January and February, it has been revealed.

“Prescriptions for anti-anxiety medications and sleep aids have risen during the pandemic, prompting doctors to warn about the possibility of long-term addiction abuse of the drugs,” reports the Wall Street Journal.

According to Ginger, an organization that provides mental health services to companies, compared to January and February of this year, prescriptions for psychotropics, most of which were antidepressants, were up 86% for the months of March and April.

The stress of unemployment, social isolation and health concerns are all cited by Americans who say the lockdown is having a serious impact on their mental health.

The numbers emphasize the significant mental health toll created by the lockdown which will reverberate for many years to come.

As we highlighted yesterday, Doctors at John Muir Medical Center in Walnut Creek, California say they have recorded more deaths from suicide than coronavirus, with a year’s worth of suicides and suicide attempts being recorded in a 4 week period.

“Community health is suffering,” warned Dr. Mike deBoisblanc, as he called for the lockdown order to be fully lifted.