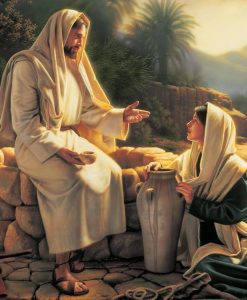 This scene at Jacob’s well is one of the most amazing in human history. The dread Judge of the quick and the dead and one of the vilest of sinners are met together. But He is there not to condemn her, but to seek and to save her. The Mighty God, the Everlasting Father, the Prince of Peace, was sitting, weary and thirsty, by a well, but had no means even to quench His thirst. He, as Man, was dependent on an outcast woman for a little water.

His Grace and Love, rejected by Israel, now pour out their fullness upon an impure Samaritan—for Love is pained unless enabled to act. The floodgates of Grace lifted themselves up to bless the misery which Love pitied. Man’s heart, withered with self-righteousness, cannot understand this. Thus, sinners respond to the Grace which Pharisees proudly refuse; for Grace flows in the deep channels dug by sin and misery.

Apparently ashamed to come with the other women in the cool of the morning to draw water, she was obliged to come alone in the burning heat of the noonday sun. As with Nicodemus, so with the Samaritan, the Lord hastened to raise the question of sin in the conscience. Nicodemus was highly moral and the Samaritan, grossly immoral; yet was there no difference between them. Both were sinners needing cleansing and Salvation. But how different was the Lord’s method with each of them! The moralist was at once met with the abrupt word, “You must be born again,” but to the sinner, and One Who knew she was a sinner, He said, “Give Me to drink”!

A profession of faith in Christ which ignores the question of sin, the Holiness of God, the spirituality of worship as distinct from sacerdotal ceremonies, the need of pardon, and the condition of trust in an atoning and revealed Savior—such a profession is worthless.

The sinner, exampled by the woman, accepts such, but self-righteousness, exampled by Nicodemus, could never accept such! Merit, in the one case, did not admit into Eternal Life, and demerit, in the other, did not exclude from it.

When Jesus, concerning the Messiah, said to the woman, “I am He!”—she was then saved by that Revelation (Matthew 11:27); for intelligence in Divine things comes by conscience and revelation and not by intellect.

Upon accepting Christ, “The woman then left her water pot, and went her way into the city, and said to the men (religious leaders of the city), Come, see a Man, which told me all things that ever I did: is not this the Christ?” (John 4:28-29). This woman, who had been married five times, thus became the first Preacher of the Gospel to the Gentiles. So effective was her preaching that it caused a Revival. She became a vessel to receive and then to minister the gift of life.

And so can all who make Jesus the Savior and the Lord of their lives.