Canada to deport Christian refugee family back to jihad-plagued Nigeria

Christine Douglass-Williams | Jihad Watch  –  “The Welland community is rallying behind a Nigerian family that has lived in the city since 2018 and is facing deportation back to their home country – a place they say remains unsafe because of their religious beliefs.”

The family is Christian, and Canada’s Refugee Protection Division is unconvinced that they are in danger in Nigeria, despite Nigeria being a Muslim country where Christians are tormented by jihadist factions, including Boko Haram, the Fulani group, and al Qaeda. Plus, “in 2015 Ogunkoya and her husband…became ordained ministers in the Christian faith. This was a problem for her father, who she claims to be an Islamic scholar affiliated with Nasril Fathia, a group that professes extremist Islamic ideologies.”

Canada has implemented a generous open-door immigration policy toward Muslim migrants, but it is turning its back on a Christian family seeking refuge from real danger, a family that has had no problems in integrating and has been living peaceably with neighbors and the wider Welland community. Canada’s general stance toward immigration is as follows: the country’s Immigration minister Ahmed Hussen promised to lead the charge on the global UN refugee plan, aka The UN Migration Pact. Hussen also defended a bill reinstating the citizenship of convicted terrorists in 2017. Last month, Hussen announced Canada’s plans to “massively ramp up” refugee intake to include economic migrants.

Canada’s big welcome has also extended to returning Islamic State jihadis. The country has been consistant in its open-door approach. Following Trump’s Executive Order to temporarily ban travelers from seven Muslim countries of concern, Trudeau immediately tweeted out a welcome to refugees: “To those fleeing persecution, terror & war, Canadians will welcome you, regardless of your faith. Diversity is our strength #WelcomeToCanada.” Months later it was reported that Canada “admitted the largest number of refugees in a single year in nearly four decades, according to the Office of the United Nations High Commissioner for Refugees.” The top five countries of origin for refugee arrivals to Canada were Syria, Eritrea, Iraq, Congo, and Afghanistan.

Given Canada’s approach to immigration, it is peculiar that this Christian family is facing deportation, especially given the obvious threat to their lives if they are sent back to Nigeria — or maybe it is not so peculiar. “In Trudeau’s Canada, Christians are not welcome,” because according to Trudeau: “evangelical Christians” are “the worst part of Canadian society.” 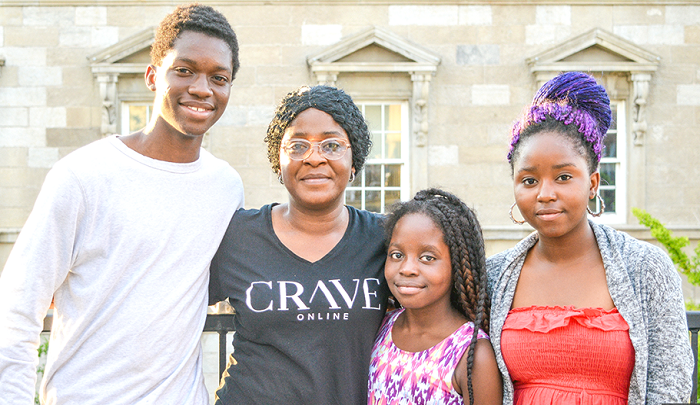 “Welland family facing deportation ‘should be in this community,’” by Chris Dube, Welland Tribune, July 12, 2019:

The Welland community is rallying behind a Nigerian family that has lived in the city since 2018 and is facing deportation back to their home country – a place they say remains unsafe because of their religious beliefs.

Morufat Ogunkoya fled the western Africa nation and obtained a visa to travel to the U.S. in 2016. After a brief period of time there, she didn’t seek asylum status and returned to Nigeria.

In late 2017, her son Viktor and two daughters, Hephzibah and Rejoice, were also granted visas to enter the U.S. and in January 2018, the family entered Canada at an unmarked border crossing at Lacolle, Que., “eluding the official port of entry,” reads a decision from the Immigration and Refugee Board of Canada to deny them permission to stay.

The decision has been appealed by the family but was withheld by the government approximately two weeks ago.

The request to receive protection from the federal government has been denied because Ogunkoya has been unable to provide evidence related to the reason behind her family leaving Nigeria.

In 2015, Ogunkoya and her husband, who she has not seen since their arrival in the U.S. a year and a half ago, became ordained ministers in the Christian faith.

This was a problem for her father, who she claims to be an Islamic scholar affiliated with Nasril Fathia, a group that professes extremist Islamic ideologies.

It is the board’s opinion that the family “failed to provide any objective evidence to corroborate the father’s alleged leadership role” in the extremist Islam community of Nigeria….