A deranged Democrat Lunatic posted on Twitter that just because she found out she was pregnant on the same day Trump took office, she wants to have an abortion!  My solution to this Lunacy further down. 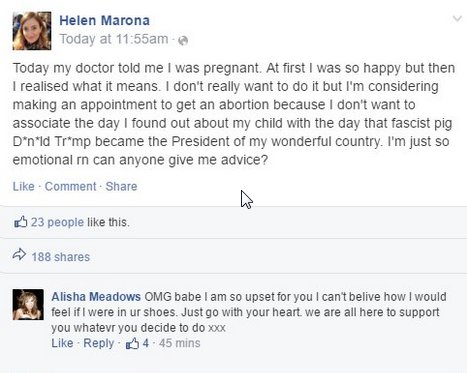 Just because a Murder Mill will be closing in Kentucky, Harlots want women to Stock up on Coat Hangers for self induced Abortions! I found this story at one of the worse God and Humanity hating sites there is. Original Story Here They, the Satanists, Witches, Homosexuals and Lesbians, want whores who can’t keep their legs closed to self abort. … Click Here to Read More

Singer and TV personality Nick Cannon doubled down on his criticism of Planned Parenthood, saying the abortion provider was designed to “exterminate” black people.

Lesbian Bimbo’s don’t usually get pregnant. It takes the seed of a man if she does not know!

Life News December 19, 2016 – Actress and producer Lena Dunham is setting yet another precedent for abortion-obsessed Hollywood: wishing for the opportunity to have had an abortion.

Click Here to Read MoreLena Dunham: “I Haven’t Had an Abortion, But Wish I Had”

Life News December 15, 2016 –  The head of the nation’s biggest abortion business is happy pro- abortion President Barack Obama is forcing states to fund it with their tax dollars.

Christian News December 13, 2016 COLUMBUS, Ohio – Republican governor and former presidential candidate John Kasich vetoed a bill on Tuesday that would have banned abortion when a heartbeat is detected, while signing into law legislation that bans abortion after 20 weeks gestation.