Well I have been a bad boy and have been kicked out of the sand box once again.

I am blocked, and will probably be Banned soon, for Speaking the Truth about LGBTTQQIAAP ( lesbian, gay, bisexual, transgender, transsexual, queer, questioning, intersex, asexual, ally, pansexual ). Yet they let people make DEATH THREATS against the president:

Galatians 4:16 “Am I therefore become your enemy because I tell you the truth?”

They are also blocking  this article from being posted on my time line! Share this as much as you can!

The Truth and the Gospel will NOT be silenced! 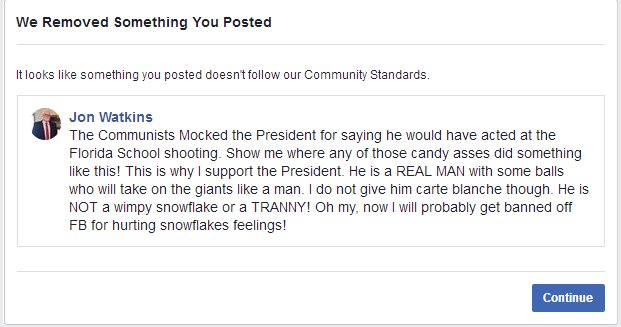 Update 4/22 4:30 PM Central Time. The Homo lovers deleted another one. Seems someone is going through my posts and flagging them!

Here is how I responded to the Gestapo after the 4:30 post delete:

So you let people trash God and his word, protecting their free speech, and when I say they are homos lesbians and tranny’s and one of those gods complain, you remove and block me? Are you clowns going to give me the courtesy of dialog or do I need to ask the Lord to bring the plagues of the Bible on you?

And I WILL PRAY that way! I HAVE seen the Lord answer such a prayer in another matter! In fact, here is how I pray for the enemies of God as a last resort!

Post # 4 deleted because of telling the Truth about the Deviates!

Last time it was for 3 days. This time it is for 7 days. What is my crime you may be wondering? Well, I really don’t know other than I posted “Hate Speech”! 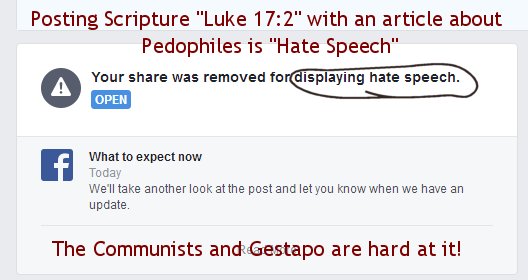 What was so hateful?

I don’t know! All I got was a quick notice when I logged in this morning (4/22) to view “Birthday wishes”! Yea they seem to have waited till my birthday to block me figuring it would be devastating and cause me great distress!  NOT!!!

The notice was just a quick note that a post has been removed and had the following scripture but did NOT reference the post: Luke 17:2 “It were better for him that a millstone were hanged about his neck, and he cast into the sea, than that he should offend one of these little ones.”

I can only assume it was about the Pedophile priests or other deviate Homosexuals! It must have been an old one because I have not posted that particular scripture in quit some time. Maybe a month or two. So I am am sure some Homosexual Leftist Snowflakes got their panties all twisted up and cried like the babies they are!

Update 4/24/18  Well the Gestapo in a round about way showed me the offending post.

Public Schools Indoctrinating Young Children into the Tranny Mentality  Go and share this all over Facebook! I bet it gets rejected and will not be allowed to post for anyone.

Yep, they don’t like the word Tranny as that is why 3 other posts were deleted! 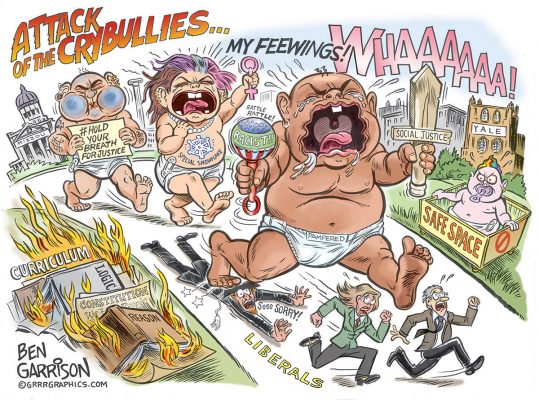 So, if you tell the truth about the perverts and quote scripture, that is now considered “hate speech”  The Apostle Paul said it correctly to the Galatians:  Galatians 4:16 “Am I therefore become your enemy because I tell you the truth?

Incidentally, it was a post about a Homosexual preacher that got me blocked for 3 days last time!  See that here. Face book LOVES the perverts and deviates

The Communist Gestapo does not like the truth and the light to be shown upon them. They are like cockroaches scurrying around then they run and hide when you confront them!

I am sure many of you know of the censorship of Diamond and Silk: Facebook Deems Pro-Trump Diamond And Silk ‘Unsafe To Community’

They have a huge voice and following so Facistbook backed down! Me, I am a lowly serf who has just a few friends and followers who are to scared and gelded to raise a stink about it. So I will remain outside the sandbox for a few days as punishment for not playing nice with Deviates!

If you are not afraid of the scum, visit all 3 websites and share the articles I can’t for the next 7 days.

I will update if the Gestapo responds, but I doubt they will!