This guy was no Pastor or preacher of the Gospel—He is a Satanist!

I searched and searched and no where did I find anything about about what kind of “devout Christians” they were! 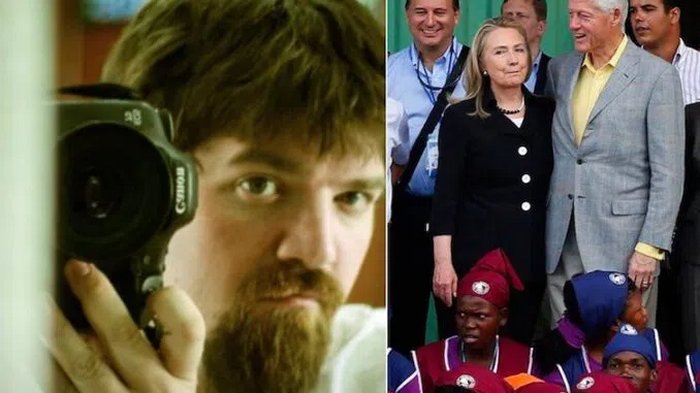 Child welfare authorities in Florida confirmed in January that James Corrigan Clay violently raped the children he adopted with his ex-partner, Shelley Jean, in Haiti.

Yahoo News reports: Clay sexually abused the unidentified child from January 2014 to December 2017, the indictment states. No further details are provided in the filing, except that the alleged victim was under 18. But Clay’s ex-wife, with whom he had two biological children in addition to the pair they adopted, told The Daily Beast on Friday that the illicit conduct involved one of their own kids.

Shelley Jean Clay, who split from Clay more than a decade ago and now operates a Haitian-focused crafts market in Florida, declined to provide further details about the allegations, emphasizing that she was not involved and had no idea what was happening.

“It was my child, but I don’t think I am at liberty to talk about it because the court case is in process,” she told The Daily Beast. “I’m not opposed to the truth coming out, but I don’t want to jeopardize the case.”

Shelley did not specify whether or not the alleged victim was one of the adoptees or a biological child.

Clay operated his ministry, the Apparent Project, with a stated goal of “building future leaders in Haiti,” alongside a tattoo and body piercing parlor in Port-au-Prince. He parted ways with the organization in 2013, according to Shelley. Clay remains detained in a Pennsylvania lockup pending a court hearing on Mar. 15.

Both devout Christians, Corrigan and Shelley Jean Clay left Washington State and headed to Haiti in 2008. There, they took jobs as “house parents” at an orphanage, where they were in charge of 25 boys ranging in age from 7 to 17. After a year or so, the couple began a workshop that taught locals how to earn money by making jewelry and handicrafts.

Their products were sold locally and in partnerships with large companies abroad, including the Gap, Donna Karan, and Macy’s. The project boasted celebrity clients such as Oprah Winfrey, Ben Stiller, and Kim Kardashian, according to Clay.

“Currently, in addition to teaching adults, they are sponsoring classes for children, offering lunch-time ‘parties’ to feed street kids, and offering food and in some instances shelter to those with little to nothing to call their own,” an arts blogger wrote of the Clays in 2010.

By 2016, the couple’s “desire to continue their care increased,” and they opened the “AP Preschool,” according to the post.

“The year was a success, and in 2017, we added our AP Kindergarten,” it explains. “The goal is to grow with our AP children by adding a class to our school each year! And… to provide quality education, along with character development based on Biblical principles! We are working to raise leaders who will be able to bring positive change to their world!”

By this time, Clay had already been abusing his victim for roughly three years, according to the feds.

Clay and his then-wife launched the nonprofit Apparent Project with an inheritance Clay received from his late father, who died in a plane crash in 2003.

The two had “struggled with fertility issues for years and had decided that if they were going to add to their family, they may as well adopt from a country where thousands of children are abandoned each year,” according to a 2012 profile of the couple in the Deseret News. “Because Haiti requires a two year wait for international adoptions, Clay decided to move into the orphanage where her future son lived.”

They bought a house in Port-au-Prince, “began collecting garbage from the streets,” the profile explains, and the Apparent Project soon started to take shape.

Once they got established, Clay began working on a documentary about Haitian children living in slavery.

“Abandoned by their parents, most work as indentured servants for family members, but some end up in the sex trade,” explained the Deseret profile.

“Corrigan enjoys training amature [sic] and professional artists in multiple mediums,” his shop’s still-live website says. “He is currently establishing an apprenticeship course for Haitian tattoo artists to raise the national standards for health, safety, and artistic excellence. He strives to change the negative cultural stigma of the tattoo art form in Haiti by focusing on positive subject matter, beautiful composition, and demanding integrity and ethical business practices from those he trains.”

The site now carries a disclaimer at the bottom, reading: “We are no longer based in Haiti.”

As of late December, the Apparent Project said it employed 25 Haitian teachers and support staff, had enrolled 70-plus Haitian children in its school, had more than 25 teens and adults participating in job training programs, and had enlisted a software engineer to teach Haitians how to code.

“From my experience in the past decade… Haitians have always welcomed prayer,” current executive director Marilyn Monaghan wrote in a blog post. “They have always cried out to God. They still do. I’ve seen their cries of desperation. But now I often see joy & gratitude in their times of prayer & worship! They are experiencing a new life! The seeds ‘you’ sowed into their lives are producing good ‘stuff’ in their hearts & is evident in their daily lives! Their lives have changed.”

Officials with the Apparent Project, which is still registered as a 501(c)3 and has brought in annual donations as high as $715,000, according to tax records, did not immediately respond to The Daily Beast’s request for comment.

Clay’s lawyer, William H. Difenderfer, was out of the office on Friday afternoon and unavailable to comment, his assistant said.

If convicted, Clay faces up to 30 years in federal prison.