What does Farming and Weeds have to do with Religion, the Fake News Outlets, the Clowns in Government?

Well stick around and you will find out!! 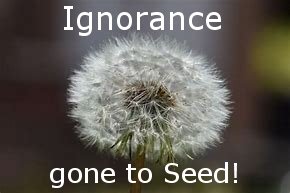 Back in the mid 2000’s I used to listen to Derry Brownfield (passed away in 2011) on Short-wave radio. He was a farmer and host of the show “The Common Sense Coalition”.  Derry, being a farmer, is the one who coined the phrase “Ignorance Gone To Seed”. He had a daily segment of the news with that title so everyone who was listening knew what he was discussing was Ignorance. Usually about the Clowns in Government.

Anyhow, it stuck with me all of these years and I have a category on all of my websites with that phrase! I think as you read the rest of this you may understand a bit better.

How many times have you seen news or have been talking with someone, about anything in general, and thought what in the Hell are they thinking or talking about? People, mostly Talking Heads on TV,  make some of the most outlandish, stupid, foolish and Ignorant statements I have ever heard in my life.

“Better to say nothing and be thought a fool than to open your mouth and remove all doubt” – Whoever coined it!

Proverbs 17:28 “Even a fool, when he holdeth his peace, is counted wise: and he that shutteth his lips is esteemed a man of understanding.”

“gone to seed” refers to the stage in gardening in which the flowers are not blooming and the leaves have fallen off the trees, like during the winter. So basically when referring to a person or thing, it means past its prime, not full of life any more. If a celebrity has “gone to seed” then they are thought of as a “has-been” and no longer what they used to be. Source

Ignorance Gone To Seed is when a Talking Head, be it a Religious Leader, a Political Leader, or a News Reader Spews out of their Demonic mouth, aforementioned outlandish, stupid, foolish and Ignorant statements. They call them “Talking Points”. Those talking points are distributed to the masses who can’t think for themselves who are in a cult of a certain ILK!

This is where the Seed comes in to play!

The masses of Gaslighted, Brainwashed, Zombie followers pick up on the Ignorance that was spewed and spread it like the weed seed being blown in the wind! It then chokes out TRUTH and the Ignorance and LIES just keep on seeding!

So what is an example of Ignorance Gone To Seed?  Well this recent headline is just one! Biden Adviser Says ‘Getting Those Shots Into 5-11 Year Olds’ Is Key To Stopping Inflation

Picture a field that has been sown with wheat. Then, as it germinates and grows, that wheat field has WEEDS, or TARES as the Bible calls them, growing in the midst. How did the undesirable seed, Ignorance in the writing, get there? Scripture tells us from whence those Weeds, Tares came!

At the time Jesus was teaching His Disciples, he may have been referring to Lolium temulentum, typically known as darnel, poison darnel, darnel ryegrass or cockle as the TARES because it looks JUST LIKE WHEAT! 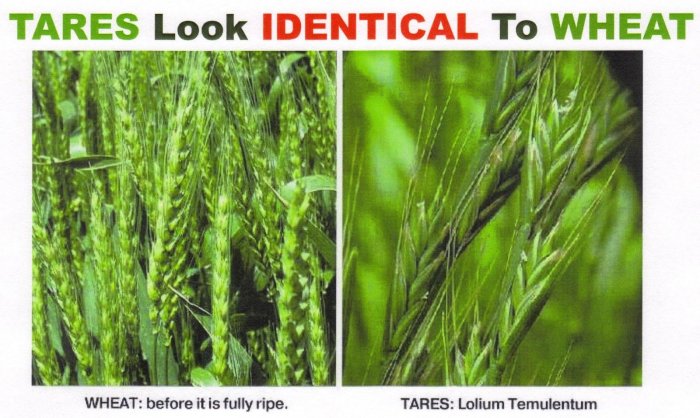 The Parable of the Sower

Matthew 13:3-30 “And he spake many things unto them in parables, saying, Behold, a sower went forth to sow; 4 And when he sowed, some seeds fell by the way side, and the fowls came and devoured them up: 5 Some fell upon stony places, where they had not much earth: and forthwith they sprung up, because they had no deepness of earth: 6 And when the sun was up, they were scorched; and because they had no root, they withered away. 7 And some fell among thorns; and the thorns sprung up, and choked them: 8 But other fell into good ground, and brought forth fruit, some an hundredfold, some sixtyfold, some thirtyfold. 9 Who hath ears to hear, let him hear.”

The Disciples were Confused just as many are today who have no Discernment, and are Biblically Ignorant!

“10 And the disciples came, and said unto him, Why speakest thou unto them in parables? 11 He answered and said unto them, Because it is given unto you to know the mysteries of the kingdom of heaven, but to them it is not given.12 For whosoever hath, to him shall be given, and he shall have more abundance: but whosoever hath not, from him shall be taken away even that he hath. 13 Therefore speak I to them in parables: because they seeing see not; and hearing they hear not, neither do they understand. 14 And in them is fulfilled the prophecy of Esaias, which saith, By hearing ye shall hear, and shall not understand; and seeing ye shall see, and shall not perceive: 15 For this people’s heart is waxed gross, and their ears are dull of hearing, and their eyes they have closed; lest at any time they should see with their eyes, and hear with their ears, and should understand with their heart, and should be converted, and I should heal them. 16 But blessed are your eyes, for they see: and your ears, for they hear. 17 For verily I say unto you, That many prophets and righteous men have desired to see those things which ye see, and have not seen them; and to hear those things which ye hear, and have not heard them.”

Now here in Verses 18-30 is where the Lord tells you where the Tares come from. Pay attention class!

He could probably tell they still looked Confused so he continues

24 Another parable put he forth unto them, saying, The kingdom of heaven is likened unto a man which sowed good seed in his field: 25 But while men slept, his enemy came and sowed tares among the wheat, and went his way. 26 But when the blade was sprung up, and brought forth fruit, then appeared the tares also. 27 So the servants of the householder came and said unto him, Sir, didst not thou sow good seed in thy field? from whence then hath it tares? 28 He said unto them, An enemy hath done this. The servants said unto him, Wilt thou then that we go and gather them up? 29 But he said, Nay; lest while ye gather up the tares, ye root up also the wheat with them. 30 Let both grow together until the harvest: and in the time of harvest I will say to the reapers, Gather ye together first the tares, and bind them in bundles to burn them: but gather the wheat into my barn.”

So it is imperative that YOU beware and are able to differentiate between the Lie and Truth, between the Wheat and Tares.  You must be able to discern who is lying and where those lies originate. All who are not children of GOD are the Tares, and ALL LIES come from the Pit of Hell!!    Anyone who is not on the Side of TRUTH and GOD, are on the SIDE of LIES and the DECEIVER!!