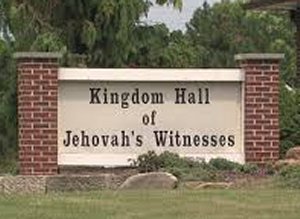 They calim that the groups elders are ‘inadvertently’ protecting the abusers.

The Mail Online reports: A former elder said the group had been failing to involve the authorities of the alleged abuse, and revealed that it has a policy of not punishing alleged child sex abuse unless a witness has seen the abuse, or an abuser confesses.

The group claims it always tells police if a child is in danger and complies with ‘child abuse reporting laws even if there is only one witness’.

One former elder, who says he was abused from the age of nine to 13, said children were still being abused within the organisation.

John Viney said he was abused by a ‘distant family member who was an active Jehovah’s Witness’.

Speaking to the Victoria Derbyshire programme on the BBC, he described the organisation as a ‘closed shop’ and said that the group handles matters ‘within the congregation’.

‘I know for a fact now that there are parents that haven’t done anything about the abuse of their children by others because they don’t want to bring reproach on Jehovah’s name.’

In 2019 Mr Viney reported his abuse to the police and learned that the same abuser had gone onto abuse other children, before dying in prison.

‘What would have happened if I had had the courage and common sense to come forward?’ he added.

Another alleged victim claimed to the BBC that after she had been abused elders would visit her and repeat scripture which stated why the abuse should be ‘kept in house and now follow the laws of the land’.

She was also asked to repeat details of the abuse in front of elders.

Former members also told of how they were forced to recount details of their abuse to a committee, while their abuser was also present.

Her abuser was jailed for two years, but the victim said he was welcomed back into the organisation on his release.

One solicitor representing some of the former members who are suing said they had decided to seek compensation after their request of an apology was denied.

Thomas Beale said those suing claim the organisation had been ‘negligent’.

Now MPs have also raised concerns about the group and how abusers have access to ‘vulnerable people’.