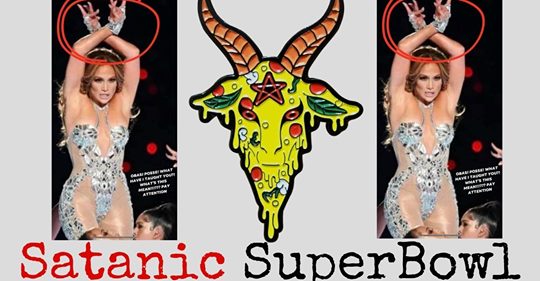 The Devil helps Idols to Dance and Sing, Wither and Scream, all while they forget the Lord and chase their Dream.  by Jon Watkins | ExposingSatanism.org 2/3/20

Proverbs 30:20 “Such is the way of an adulterous woman; she eateth, and wipeth her mouth, and saith, I have done no wickedness.”

I did not watch the Super Bowl, but I knew exactly what the Half Time Show would be. Just more Whore’s of Hellywood prancing around spreading their legs as young girls and young women idolize them. I have even seen some old women on social media praising the Jezebels!

Well there you have it and that is the reason for her having NO Morals. All she has to do is go confess to a pedophile priest who will bless her and tell her she is forgiven!

Breitbart News – During her Super Bowl after-party on Sunday night, actress and singer Jennifer Lopez told guests that her scantily clad, pole-spinning halftime show was all about “working moms and single mothers.”

As boyfriend A-Rod watched, JLo spoke to family and friends such as Fat Joe and Jamie Foxx, telling them that she just gave posterity the “best Super Bowl shows of all time,” TMZ reported.

Proverbs 12:4 “A virtuous woman is a crown to her husband: but she that maketh ashamed is as rottenness in his bones.”

“I was happy to stand up there with Shakira,” she said, calling her and Shakira, “two working moms who did one of the best Super Bowl shows of all time.”

Perhaps sensing that calling her own show the best in NFL history was a bit arrogant, the Shades of Blue star noted that she had been told that her show was “the best.” Party guests are also heard saying, “we said it, everyone said it,” in reply.

“That’s how it felt,” Lopez added about that high assessment of her halftime show.

But then she got even more serious by claiming that the show was about single and working mothers.

“I know how special it is to you that I hold up an American flag, I hold up a Puerto Rican flag, and have my daughter sing with me,” she said into the mic. “And to represent women, and single moms, and working moms,” she said, adding that women can do “anything they want to do.

That is a laugh! Most of the Mothers I know don’t get half naked on TV and Shake their asses in front of impressionable Children. Whores do that!! She teaching her daughter to be a Whore and that IS all she, her daughter, is seeing out of this Jezebel JLo!!

Proverbs 22:6 “Train up a child in the way he should go: and when he is old, he will not depart from it.”

That scripture goes both ways!! Good job Jezebel! You are training another godless Catholic Whore!

“Get loud,” she continued, “stand up for yourself, and have the strength — sometimes women lack the strength to really do the best for themselves, and that’s what I want to put out there.”

Proverbs 7:10-12 “And, behold, there met him a woman with the attire of an harlot, and subtil of heart.11 She is loud and stubborn; her feet abide not in her house:12 Now is she without, now in the streets, and lieth in wait at every corner.”

Proverbs 21:4 “An high look, and a proud heart, and the plowing of the wicked, is sin.”

On the day of the highest rate of sex trafficking, the NFL says, “Hey, let’s have two women dance half naked and get a bunch of zoomed in crotch shots of them. That’s female empowerment!” Do they have no clue that they just contributed to the commodification of women? #SuperBowl

Proverbs 6:24-26 “To keep thee from the evil woman, from the flattery of the tongue of a strange woman. 25 Lust not after her beauty in thine heart; neither let her take thee with her eyelids. 26 For by means of a whorish woman a man is brought to a piece of bread: and the adulteress will hunt for the precious life.”

Cristina Laila | Gateway Pundit – Evangelist Franklin Graham said he was disappointed in Pepsi and the NFL because the Super Bowl halftime performance “showed young girls that sexual exploitation of women is okay.”

“I don’t expect the world to act like the church, but our country has had a sense of moral decency on prime time television in order to protect children. We see that disappearing before our eyes,” Franklin Graham said Sunday night in a Facebook post.

“It was demonstrated tonight in the Pepsi Super Bowl Halftime Show—with millions of children watching. This exhibition was Pepsi showing young girls that sexual exploitation of women is okay. With the exploitation of women on the rise worldwide, instead of lowering the standard, we as a society should be raising it. I’m disappointed in Pepsi and the NFL,” he said.

Shakira and JLo were the featured performers Sunday during the Super Bowl’s halftime show.

JLo’s pole dancing and crotch shots during the halftime show on Sunday left viewers in shock.

J-Lo danced on a stripper pole and even brought her young daughter on stage.

Thank you, Franklin Graham for speaking out against this filth. Visit to see Images