At least the Muslims know there is a Devil. They will all personally meet him one day!

1st Corinthians 1:18 “For the preaching of the cross is to them that perish foolishness; but unto us which are saved it is the power of God.”

Jihad Watch – “And their saying, ‘Indeed, we have killed the Messiah, Jesus, the son of Mary, the messenger of Allah.’ And they did not kill him, nor did they crucify him; but another was made to resemble him to them. And indeed, those who differ over it are in doubt about it. They have no knowledge of it except the following of assumption. And they did not kill him, for certain.” (Qur’an 4:157)

Given that the Qur’an teaches that Jesus was not crucified but someone else was, who was made to resemble Jesus, it’s hard to find Islamic fault with what Abdul Somad said. If Jesus was not crucified, the cross is not a symbol of redemption, as it is for Christians, but of deception, and hence is “an element of the devil.”

“Faced with the clamor provoked by Somad’s statements, interfaith dialogue activists urged Christians not let their emotions prevail to the point of undermining the sense of national unity.”

The Christians are not the ones that Indonesia has to worry about letting their “emotions prevail to the point of undermining the sense of national unity.” 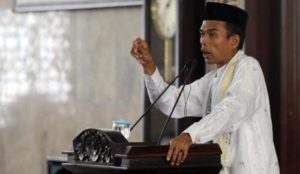 Jakarta (AsiaNews/Agencies) – A notorious Muslim preacher, Abdul Somad (pictured), has come in for strong criticism, after a video went viral on social media, showing one of his sermons in which he describes the cross as “an element of the devil”.

Despite Somad’s claim that he had no intention of promoting religious intolerance, such remarks have sparked outrage among Indonesians, including Muslims.

In a statement, Muhammadiyah, one of the country’s oldest and most popular Islamic organizations, said such words could be seen as blasphemy. Others accuse the preacher of fostering anti-Christian sentiments.

The incriminating sermon was delivered last Saturday at a mosque in Simpang Kelayang, a village in Riau province (Sumatra Island).

The impact of Somad’s statement in social media prompted the 42-year-old preacher to release another video the following day.

“The Quran reciting session was held in a closed Mosque, not at a stadium, a football field, nor aired on television,” he says. “It was for Muslims internally. I was answering a question about statues and the position of the Prophet Isa (Jesus) relative to Muslims.”

Not many were satisfied with his explanation, especially Christians….

Faced with the clamor provoked by Somad’s statements, interfaith dialogue activists urged Christians not let their emotions prevail to the point of undermining the sense of national unity.

Increasingly, extremists are resorting to hoaxes, fake news and controversy to fuel divisions in Indonesian society, first of all by exploiting religious feelings.

This IS the mindset of the majority of Muslims. The more radical ones open their mouths and let us know what is in their thinking and heart.