The truth is Nasty Nancy and that Gaggle of Leftist Bimbo’s in Congress love it when death occurs. They Revel in it! When you see them grand-standing they can’t contain themselves! They almost shutter in orgasmic delight when talking of  women’s rights, funding Planned Murderhood—and the Sacrifice of Baby’s to their god Lucifer via Abortion’s!!

Abortion Leading Global Cause of Death in 2020 with 42.7 Million Killed

Nancy Pelosi: ‘Every Life Lost is a Profound Tragedy’

CNSNews.com House Speaker Nancy Pelosi (D.-Calif.) issued a statement on Monday expressing her sorrow for the reported 500,000 lives that have been lost in this country as a result of the COVID-19 pandemic.

“The loss of 500,000 American lives from the coronavirus is an horrific human toll of staggering proportions and incomprehensible sadness,” Pelosi said. “Every life lost is a profound tragedy that we mourn and that breaks America’s heart.”

“Members of Congress join Americans in prayer for the lives lost or devastated by this vicious virus,” she said. “As we pray, we must act swiftly to put an end to this pandemic and to stem the suffering felt by so many millions.”

NBC News reported on Sunday that, according to its count, 500,000 people have now died in the United States as a result of COVID-19. “The U.S. death toll from the coronavirus topped 500,000 on Sunday, according to an NBC News tally,” NBC reported. Read more here

Well now isn’t that just touching coming from a Jezebel with Murder and Sacrifice in her heart.

“As we pray, we must act swiftly to put an end to this pandemic and to stem the suffering felt by so many millions.”

Hey Jezebel, how about we put an end to the PANDEMIC of ABORTION HUH?

That means Planned Parenthood killed almost 34,000 more unborn babies than it did two years ago — even though the abortion giant claims it’s main focus is merely women’s health care. 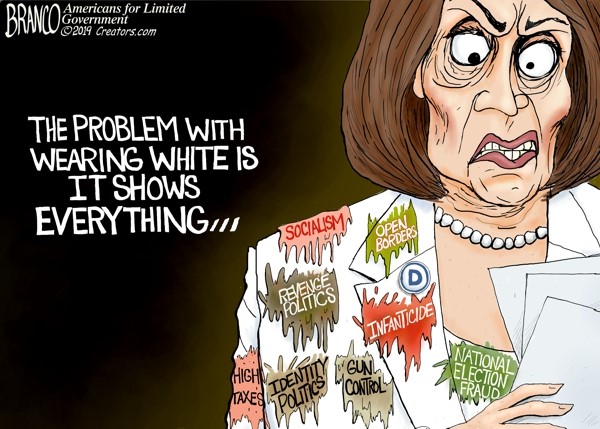