I came across that headline at a website I check daily while browsing the news Monday morning (7/22/19). I thought to myself it was just another click bait or was a hoax. NOPE,  it is true and you can see it for yourself. 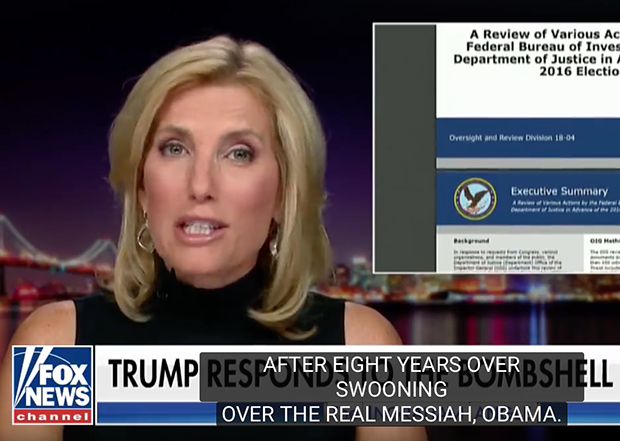 The 17-minute video shown below was posted by Fox News on their YouTube channel on June 18, 2018. It’s a clip of one of their program hosts, Laura Ingraham, from her program, called the The Ingraham Angle. So far, so good, until selecting the option to turn on closed captioning and start watching the first few seconds.

Instead of quoting her exact words, the closed captions begin with the following words, which she never says,

“Whining about the cult of Trump
after eight years over swooning
over the real Messiah, Obama.

To verify for yourself, click here to see the clip on YouTube, showing the link to Fox News’ YouTube channel, which would be impossible for anyone else to do, proving it was posted by Fox News. Click CC at the bottom of the video to turn on closed captioning. So, it appears this really happened, confirming lots of other evidence showing the spirit of antichrist is behind our mainstream news media.

Thanks to Heather Bjork for sharing this video.

Try it for yourself. It is quick, in the first few seconds so you may have to restart after you turn on the CC.

Now I am no fan of Fox News and the closeted Communist Democrats that infest the whole conglomeration. I don’t think THEY did it. They can’t.

It is the work of the demonic AI that interprets the Closed Captioning. That folks is controlled by YouTube and Google, not Fox!!

If you think that these  people and machines can not be controlled by Lucifer, then there is no hope for you!