Get ready folks, cause a very new kind of Santa Claus is coming to town!

‘Cause Santa  might come down that chimney, jump out from behind that tree,  hold you down and Sodomize you!

Matthew 11:24 “But I say unto you, That it shall be more tolerable for the land of Sodom in the day of judgment, than for thee.”

A new children’s book is about to hit the shelves in October 2017 just in time to further the LGBT agenda. The story depicts Saint Nick like you have never seen him before. It is titled “Santa’s Husband” and will tell the tale of a Gay Black Santa who is in an interracial marriage!

Apparently, Santa Claus is now, indeed, a Queer Black Man with a White Husband! At least according to the author. This is just some more Ignorance Gone to Seed just like Black Jesus! 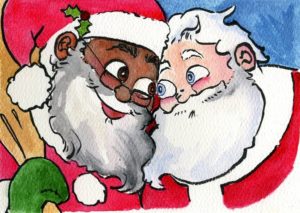 In the concept art for the book (Image at left) Santa is the black one. And he’s in an interracial marriage with the white Santa gazing lovingly up into his eyes.

It all began with a simple tweet (full tweet shown below) last December. A staff writer for CBS’ “The Late Show with Stephen Colbert, Daniel Kibblesmith, tweeted that he and his partner “decided our future child will only know about Black Santa. If they see a white one, we’ll say ‘That’s his husband.’”.

Originally meant to be a joke it’s being made a reality by Harper Design, with illustrations by Ashley Quach. Harper Design (See info on this satanic conglomeration below) will be releasing “Santa’s Husband” in time for the 2017 Christmas season.

In the story, Black Santa and his white husband live at the North Pole. As promised, in the now famous tweet, the story states that the white husband frequently covers for Santa at shopping malls, when the workload gets too heavy. This explains why most people think Santa is white. Watch for the book to appear in stores Oct. 10. Source: World Net Daily

Who is this Kibblesmith Klown?
Daniel Kibblesmith is a writer, cartoonist, and comedian in Chicago. (See Can anything good come out of Chicago?). Known as the Clown Prince of Groupon, he has written for the Onion News Network a Fake News Outlet, BlackBook, and Splitsider, and contributed the video to Funny or Die and Best Show on WFMU, as well as appearing on Bravo’s The Millionaire Matchmaker.

“Kibblesmith tweeted in December that he and his wife, author Jennifer Ashley Wright, ‘have decided our future child will only know about Black Santa’.” Source: Pink News, Josh Blackman, March 29, 2017

“Back in December, Kibbelsmith tweeted that he and his wife, author Jennifer Ashley Wright, will raise their future child to believe in a gay, black Santa Claus.” Source: Washington Blade, Mariah Cooper, March 30, 2017

So, it seems that Kibblesmith, a white, socially awkward, multi-millionaire, came up with the idea after deciding that he and his “wife” would tell their children that Santa Claus is black. I suppose because they thought it was hilariously funny?

“If they see a white one, we’ll say ‘That’s his husband,’” Kibblesmith tweeted in December.

It also seems that Kibblesmith has rejected the Creators design for marriage and aligned himself with the teachings of those who follow Satan! It has been stated (see quotes above) that he refers to Jen Ashley Wright as his “WIFE”, but on his Facebook page he states the following “I will get married when Hell freezes over.” Which is it? I have seen references to him and his “Partner” in more than one article. Usually, when one is described as someone’s “partner” it infers the couple is merely cohabitating or they are Homosexual or Lesbian! Could it be he is a closeted Homosexual, and perhaps Jen is a Tranny? Is that why he is trying to pervert children?

Tell me, why did Kibblesmith’s tweet last December seem to infer that they were referencing any upcoming first child? The following tweet posted by his “partner” Jen, clearly states that the couple “already have 4 children”? I smell an agenda, do you?? 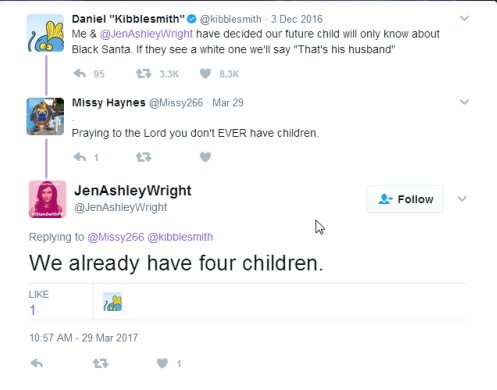 Yes, it is a given that he is promoted as a “funny man” and his material is not to be taken seriously. However, humor is often a clever way to disguise what is truly intended. We should always question the motives and ideology of anyone who is as successful as this man has been.

Here are some interesting facts about Harper-Collins, publisher of Kibblesmith’s book, which clearly demonstrates their Satanic Leanings!

20th Century Fox was acquired in 1985 by Rupert Murdoch’s News Corporation, FOX NEWS, who also publishes both the NIV Bible and The Satanic Bible through his ownership of Zondervan and Harper Collins. See 20th Century Fox and Fox News Network: A den of Ahab’s and Jezebel’s 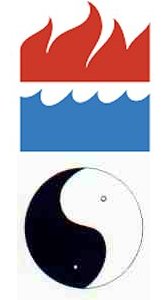 In 1989, Collins was bought by Rupert Murdoch’s News Corporation, and the publisher was combined with Harper & Row, which NewsCorp had acquired two years earlier. In addition to the simplified and merged name, the logo for HarperCollins was derived from the torch logo for Harper and Row, and the fountain logo for Collins, which were combined into a stylized set of flames atop waves.

Very interesting logo choice, symbolic of the Yin and the Yang and “as above so below”, just as illustrated in the Baphomet Statue below. Notice the Children gathered around Lucifer!

Perhaps the most obvious general symbolism of the elements is the division between masculine and feminine. Fire and air represent the Yang within Chinese thought and symbolize the masculine archetype, the active state and the thinking function. Water and earth represent the Yin within Chinese philosophy and symbolize the feminine archetype, the passive state, and the intuitive function. Fire and air have found a historical association with the sky and a relationship with the well-known symbolism of the Sky Father. The earth and water have been associated with the symbolism of Mother Earth. As Jung notes in his article “Psychology of the Transference” in The Practice of Psychotherapy, “Of the elements, two are active – fire and air, and two are passive – earth and water.” 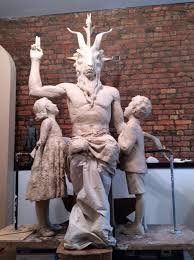 For example, fire is associated with the sun and the light of day which relates to consciousness. It is an above space phenomenon in that the quality of fire moves upward rather than downward. Our sensory perceptions relate fire to both the heat of the day and the heat of the summer season when light rules over darkness. Water is the element whose symbolism stands in direct opposition to that of fire. It is associated with unconsciousness, the darkness of night and the moon’s monthly cycles which control ocean tides. While fire moves upward water moves downward and is associated with below space rather than above space. The element of air has a masculine archetype and the element of earth a feminine archetype. Again, there is a similar symbolism with these two elements and those of fire and water. Air is an above space because it is most present above the earth rather than in the earth or below the earth. Like water, the earth is a below space rather than an above space. Source

In 1999, News Corporation purchased the Hearst Book Group, consisting of William Morrow & Company and Avon Books. These imprints are now published under the rubric of HarperCollins. 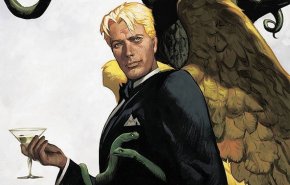 Here is an excerpt from that short article and I quote; “Fox has given a put pilot commitment to Lucifer, based on the property from DC Comics’ Vertigo imprint, EW has confirmed. The one-hour drama stars—you guessed it— Lucifer, who resigns his throne and abandons his kingdom for the gorgeous and shimmering insanity of Los Angeles, where he opens an exclusive piano bar called Lux.”

Please note that they say he “resigns his throne” which in no way gives the accurate account as to why Lucifer was CAST out of Heaven.

“ Lucifer Morningstar is a DC Comics character appearing primarily as a supporting character in the comic book series The Sandman and as the title character of a spin-off, both published under the Vertigo imprint.” See Wikipedia for more on this..

This is another reason Christians should not watch Fox. They claim to have Family values, and that they are Fair and Balanced which are both lies. Source here.

The whole Christmas season has been taken over by the Luciferians so It is no wonder that the Fox Conglomeration is now promoting a Queer Satan Claus to confuse and indoctrinate young children. Will Rudolf and the elves be the next to switch?

Christmas, along with all the other pagan holidays are “coming out” of the closet and showing their true colors. No longer will Christians be able to fool themselves into believing that these holidays were ever HOLY or related to the Creator in any way. They have always been pagan and all the whitewash in the world could not make them pleasing to GOD.

The WND author should have clearly stated that there is NO such person as Santa Claus! There may have, at one time been a goodly Saint Nicholas, which cannot be substantiated. People need to read the historical facts for themselves and learn the truth! Quit teaching their children fables and falsehoods, especially those who claim to be Christian! Teaching children about a mythical fat man donning a red suit and driving a sleigh with flying reindeer is NO different than teaching them that he is a Queer Black Man with a White Husband!

See a 9 part Series: Christmas: Is it Christian or Pagan?