He participated “in a choreographed dance for his Greek Orthodox church the weekend before” he Murdered Ten at the School he attended!

Update 2/12/22 – The demon possessed killer is being held for another year in a mental institution deemed unfit to stand trial! 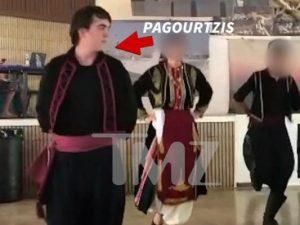 What he and the others are doing is “Dancing for and with the Devil”, instead of what David did in his dancing before the LORD! 2nd Samuel 6:14 “And David danced before the LORD with all his might; and David was girded with a linen ephod.”  It would behoove you to read just WHY David was dancing! It was not for a man-made festival! 2nd Samuel chapter 6

Note: I will get mail from Nit-Pickers about the choice of the word Jig. Yes I know that “Jig” is an Irish dance! Could not come up with a suitable Greek word! But, according to Bing, it is suitable!

The Solutions for Mass Shootings: You can’t Legislate a Sin Problem!

A Wrongful Death Lawsuit has been filed against the Parents of the Santa Fe High School Killer. See the 8 page PDF file at the end of this article

There are some interesting descriptions about the Killer in the suit that was filed in Galveston County Court.

Page 3 #8 “..on that black day, neither his life nor his heart (referring to the killer) contained a shred of hope.” (emphasis mine)

“The Murderer grievously injured still more,…….(the innocent had the) terrible misfortune to be in the same school at the same time as the monstrous Murderer who rampaged among them” (emphasis mine)

Yes it was a “black day” and he indeed did NOT have a “shred of hope” in his life or his heart! He is NOT Born Again, He does not have Jesus in his heart, and I doubt even in his mind. Neither do his Parents! Both he and his parents are Greek Orthodox. They are NOT Christians! They have a form of Godliness, but they do NOT know the LORD and are doomed to Hell.

2nd Timothy 3:2-5 “For men shall be lovers of their own selves, covetous, boasters, proud, blasphemers, disobedient to parents, unthankful, unholy, 3 Without natural affection, trucebreakers, false accusers, incontinent, fierce, despisers of those that are good, 4 Traitors, heady, highminded, lovers of pleasures more than lovers of God; 5 Having a form of godliness, but denying the power thereof: from such turn away.”

This “form of godliness” includes Greek Dancing that he participated in at church! Didn’t Jesus go into the Temple (Church) and kick such abominations out? BTW, the vendors in these mega churches are NO DIFFERENT!

Matthew 21:12-13 “And Jesus went into the temple of God, and cast out all them that sold and bought in the temple, and overthrew the tables of the moneychangers, and the seats of them that sold doves, 13 And said unto them, It is written, My house shall be called the house of prayer; but ye have made it a den of thieves.”

TMZ has obtained video of 17-year-old Dimitrios Pagourtzis participating in a choreographed dance for his Greek Orthodox church the weekend before he allegedly shot and killed 8 of his peers and 2 teachers.

Sources connected to the event tell us the dance was part of a larger Greek festival in a town about 30 minutes away from Santa Fe, TX where he went to school. The performance was rehearsed well before showtime — Pagourtzis was involved from the start. Source: TMZ

Explain to me just what the HELL does a Greek Festival have to do with the Gospel of Jesus Christ and Salvation!

Traditional Greek dancing has a primarily social function. It brings the community together at key points of the year, such as Easter, the grape harvest or patronal festivals; and at key points in the lives of individuals and families, such as weddings. For this reason, tradition frequently dictates a strict order in the arrangement of the dancers, for example, by age. Visitors tempted to join in a celebration should be careful not to violate these arrangements, in which the prestige of the individual villagers may be embodied. Source: Wikipedia

Maybe if this Synagogue of Satan gave “Strict order” to the Bible and True Gospel of Jesus Christ, he would not have turned to Satan and murdered 10 people!

No Preaching of the Gospel and adhering to the doctrine of Devils IS why the young man was into Satanism. He seemed to be obsessed with the Columbine Murderers as he mimicked them with the same type Trench coat. He also had symbols of Anarchy and Communism on his clothing as well as a shirt saying “Born to Kill”!

He posted a photo on his Facebook page of a “born to kill” T-shirt and wrote in a journal about shooting people and committing suicide. His Facebook cover photo comes from an album called “Dangerous Days” by a dystopian cyberpunk band called Pertubator with a track that took on a haunting quality before 8 a.m. on Friday morning: “Humans Are Such Easy Prey.”

The signs of dark, violent fantasies were ubiquitous in the social persona and private ramblings of Dimitrios Pagourtzis, a shaggy-haired, 17-year-old junior charged with killing nine classmates and a teacher’s aide and injuring many others at his high school early Friday in Santa Fe, a working class suburb 35 miles south of Houston.

The exact pathology behind his rampage may be studied for years, but in the grim aftermath of yet another gruesome mass shooting, his rage-filled impulses could have signaled serious trouble, if only someone knew to take them seriously or pay attention in a social media world full of vitriolic impulses. Source; Houston Chronicle

1st Corinthians 2:14-16 “But the natural man receiveth not the things of the Spirit of God: for they are foolishness unto him: neither can he know them, because they are spiritually discerned.15 But he that is spiritual judgeth all things, yet he himself is judged of no man.16 For who hath known the mind of the Lord, that he may instruct him? But we have the mind of Christ.”

I don’t need to “study for years” the motive of what is behind his “Rampage”! When all you do is listen to Demonic Music, watch violent movies on TV and Video, play violent murderous video games, you are filling your mind and heart with Murder and Death!  When you sit in a church that teaches False Doctrine and worships Idols, an UN-holy spirit comes in and takes up residence. You become “Possessed” and your thoughts and your will are given over to those demonic forces! Garbage in, Garbage out!

There IS NOT any hope for the individual, UNLESS the bondage is broken and the True Gospel of Jesus Christ is presented to them!

2nd Corinthians 4:3-5 “But if our gospel be hid, it is hid to them that are lost: 4 In whom the god of this world (Satan) hath blinded the minds of them which believe not, lest the light of the glorious gospel of Christ, who is the image of God, should shine unto them. 5 For we preach not ourselves, but Christ Jesus the Lord; and ourselves your servants for Jesus’ sake.”

Now, I am not picking on the Greek Orthodox Church for its lack of preaching the Gospel. Apostasy is running rampant in ALL of supposed Christianity, especially in these Mega Churches. Dennis Rader the BTK (Bind, Torture, Kill) serial killer was a married father of Two and was a Deacon in the BAPTIST church he was a member of! His Murder of Ten people spanned from 1974 to 1991. He confessed to the 10 but I am sure there were more!

See – As the Church goes, so goes the Country!

There are demonic forces at work placing Curses on people, especially those who have that “form of Godliness”, to keep them in bondage and to keep the True Gospel of Jesus from being heard. Listen to the clips in this video. The first few minutes is the Testimony of an Ex- Satanist and then the rest is how to combat the darts of the Enemy through Warfare Prayer!

Another interesting quote from the filing is this:

Page 4 #9 “Had the murderer not had available to him the weapons for his carnage, his hidden black rage might well have continued to simmer within, but the life’s blood of his teachers and peers … would not have been so horribly, callously and needlessly spilled,” (emphasis mine)

Yes that “hidden rage” is still there even as he sits in a jail cell. Yes, if he did not act out his hatred with guns, those ten may still be alive. Many more could be dead as he ALSO placed homemade bombs that did not go off! What if he used knives? What if he used a car or truck like the Muslims do?

It is NOT the instrument of murder and mayhem that should be on trial. What the focus should be on is the Cause, and in this case, as well as ALL the others is the Mental state of the person. Lawyers can’t put Sin on trial, nor can Politicians legislate Sin. They did however bring lawsuits and legislate GOD out of the schools and public! That IS the problem and we are reaping the results!

Galatians 6:7-10 “Be not deceived; God is not mocked: for whatsoever a man soweth, that shall he also reap. 8 For he that soweth to his flesh shall of the flesh reap corruption; but he that soweth to the Spirit shall of the Spirit reap life everlasting. 9And let us not be weary in well doing: for in due season we shall reap, if we faint not. 10 As we have therefore opportunity, let us do good unto all men, especially unto them who are of the household of faith.”