Matthew 2:1-2 “Now when Jesus was born in Bethlehem of Judaea in the days of Herod the king, behold, there came wise men from the east to Jerusalem, 2 Saying, Where is he that is born King of the Jews? for we have seen his star in the east, and are come to worship him.”

Star of Bethlehem may not have been a star after all, scientist says 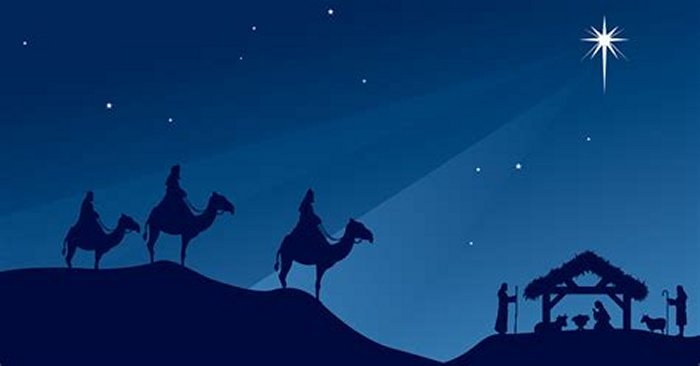 Whatever it was, God was in control of it! Some say it may have been a comet which I think is possible. The Planet alignment would not have been as bright but is possible! In either case, it heralded the Birth of Jesus!

On December 21, 2020, a rare event will occur in the night sky… And it has not been seen in over eight centuries.

On this date, Jupiter and Saturn, the two largest planets in our solar system will conjunct to form what’s sometimes referred to as the “Christmas Star” or the “Star of Bethlehem.”

So on the day of the start of the winter solstice, the two planets will appear to form a double planet in an extremely rare event that was last seen 800 years ago.

What is the ‘Star of Bethlehem’?

There are many theories about the identity of the biblical star of Bethlehem that appeared at Christ’s birth.

The most accepted theory finds the planet Jupiter to be part of that star. In the ancient world, all heavenly bodies were considered “stars”.

The Magi or the three wise men were, most likely, court advisers to Babylon who used the stars to give guidance to the ruler.

Why would God guide astrologers, of all people, to the King of Kings? This example, according to some writers, was Christ’s first human ministry to unbelievers.

Who exactly were the Magi?

But who were these mysterious wise men? One ancient Jewish writer Philo speaks of them.

Star of Bethlehem expert Rick Larson explains that Philo “describes a particular school of Magi, calls it the Eastern school, and these Magi he praises. He says these guys understood the natural order and are able to explain the natural order to others. And they were, according to Philo, probably what we might call proto-scientists.”

Early church historians had been giving a date of around 3 BC for Christ’s birth, though other scholars had been saying 7 BC because of what appears to be a misunderstanding of King Herod’s death in between those two dates.

What the Magi likely saw were five astronomical conjunctions that took place over a span of time from August of 3 BC to June of 2 BC. When one planet passes another and, as seen from earth, they line up – that would have been of great significance to these astrologer-advisers.

We now know what these conjunctions meant to these Magi as they would have observed from their far-off land. The conjunctions involved the constellation Leo the Lion, the planet Venus, the planet Jupiter and the star Regulus.

To the Babylonians, the lion represented Israel. Venus was motherhood. Jupiter stood for fatherhood or kingship. And Regulus symbolized royalty.

Put these together in the Babylonian mindset and what do you get? A clear and repeated message that a grand king had been born in Israel.

Larson used computerized astronomical tools to track the convergence of these heavenly signs involving Jupiter, Venus, Leo, and Regulus, back to when they would have occurred.

“Nine months after that first conjunction – nine months – the gestation period of a human. We see Jupiter and Venus come together to form the brightest star anyone had ever seen,” Larson said.

That would have been in mid-June of 2 BC – again near Regulus in Leo. Eventually, Larson traces it all to a conclusion on Dec. 25, in 2 BC.

“Of course, they didn’t use our calendar – you know December 25th meant nothing to them. They never heard of December, but to us, it could be a sign and it is interesting that the gifting did occur on December 25th,” he said.

The Heavens declare the Glory of God

With today’s telescopes, the grandeur of the skies is more visible than ever before. Yet even with the naked eye, the Psalmist proclaimed “the heavens declare the glory of God.“

How can he do that? Could the Star of Bethlehem be an example in announcing the Messiah? Or is this some kind of misguided astrology?

“The Bible comes down extremely hard on astrology. Reverence for the stars, the idea that stars order your life or guide you or whatever – did you know it was a killing offense in the Old Testament?” Larson said.

But the Bible also says that God put signs in the sky. Perhaps the Star of Bethlehem was like a thermometer.

The Romans thought the Star was about them; Instead, it announced the King of Kings

Of course, the Romans who ruled most of the known world at the time thought the star was about them and they even put the star on one of their coins with an image of Caesar Augustus, which represents how impressive the star was. A sort of Star of Rome rather than the Star of Bethlehem. And that’s probably what made the Magi ride toward Israel.

While the mortal Augustus has long passed from history, Jesus is worshipped by millions around the world as the Alpha and Omega, the Beginning and the End, The Eternal One Who created the heavens and the signs of His own coming – who said that one day he would also return.

So the Magi went looking for this infant king to the capital city of the Jews, Jerusalem, and the Jews sent them into Bethlehem, a place from which the Jewish scriptures prophesied a king would come. The rest is history.  Source

Fox News December 2, 2016  The famous Star of Bethlehem may not have been a star at all, but an extremely rare planetary alignment, according to a University of Notre Dame professor.

Grant Matthews, professor of theoretical astrophysics and cosmology in the Department of Physics in the University of Notre Dame’s College of Science, has been studying the Star of Bethlehem for over a decade.

“Astronomers, historians and theologians have pondered the question of the ‘Christmas Star’ for many years,” said Matthews, in a press release. “Where and when did it appear? What did it look like? Of the billions of stars out there, which among them shone bright on that day so long ago?”

After studying historical, astronomical and biblical records, Matthews believes that the event that led the Magi to Bethlehem was a rare planetary alignment that occurred in 6 B.C. During the alignment the sun, Jupiter, the moon and Saturn were all in Aries, according to Matthews, while Venus was next door in Pisces and Mercury and Mars were on the other side in Taurus. At the time, Aries was also the location of the vernal equinox.

Matthews’ research notes that the presence of Jupiter and the moon signified the birth of a ruler “with a special destiny.” Saturn was a symbol of the giving of life, as was the presence of Aries in the vernal equinox, also marking the start of spring. The professor said that alignment in Aries signified a newborn ruler in Judea to the Magi – Zoroastrian priests from ancient Babylon and Mesopotamia.

It will be 16,000 years before a similar alignment is seen again, according to Matthews’ calculations and, even then, the vernal equinox will not be in Aries. Mathews couldn’t find an alignment like the one known as the Bethlehem Star going out as far as 500,000 years.