Also see an article I wrote in 2018 The Queering and Feminizing of Young Boys They start when they are young!

The Queering and Feminizing of Young Boys 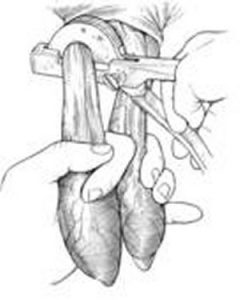 Castration causes sterilization (preventing the castrated person or animal from reproducing); it also greatly reduces the production of certain hormones, such as testosterone.

It is unknown when castration was first practiced, nor where it was invented. It may be that it arose independently in more than one place, but there is evidence that it was practiced as far back as 4,000 BC based on descriptions in the cult of Ishtar and Uruk. It may have arisen in the Neolithic period in response to animal husbandry, rising populations and population specialisation.

Castration was frequently used for religious or social reasons in certain cultures in Europe, South Asia, Africa, and East Asia. After battles, winners sometimes castrated their captives or the corpses of the defeated to symbolize their victory and seize their “power”.

Castrated men — eunuchs – were often admitted to special social classes and were used particularly to staff bureaucracies and palace households: in particular, the harem. Castration also figured in a number of religious castration cults. Other religions, such as Judaism, were strongly opposed to the practice. The Leviticus Holiness code, for example, specifically excludes eunuchs or any males with defective genitals from the priesthood, just as castrated animals are excluded from sacrifice.  Source: Wikipedia

The following penned by Dave Daubenmire is NOT about psychical castration, it is symbolic. When you castrate an animal, it removes ALL of the male aggression and dominance that God has ordained. They become DOCILE and USELESS!

Warning:  Harsh Language.  May offend women and men who act like women.

By Dave Daubenmire | Despite what the evangellyfish leadership may try to convince you QUIT does not men stop…as in “stop being a man.”  It is the opposite of that.  Paul’s admonition here is to exhort Christian men to MAN UP…not GIVE up.

Webster’s defines “quit” as “To carry through; to do or perform something to the end, so that nothing remains; to discharge or perform completely.

Modern pulpits have pussified the American male.  If you are offended by the word pussified I suggest you read no further.  You are the problem I am preparing to write about.

I am 100 percent Christian.  Blood bought, fire baptized, and endued by the Holy Spirit from on high.  I can sin with the best of them, although I no longer do, and I am a proud draftee into the army of God.  Jesus rescued me from a one-way train to hell and commissioned me as a soldier of the cross.  I hate sin, the Devil, and the workers of iniquity.  I am unashamed of the Gospel of Jesus Christ.

I have been faithfully writing commentaries since 2003.  It is not my profession and I do not get paid for anything I write.  My target audience is Christians, but I fight hard to not be locked inside some category that others want to place me.  I focus on Truth and my desire is to encourage Christians to stand up and fight for the Truth. Fight…that doesn’t sound very Christian does it?

I am not considered a “fan” of Pastors. Most of them are weenies. For the most part they are the ones who are responsible for the mess that America is in today.  In a time when America most needed wartime pastors America’s pulpits are filled with skinny-jeaned charlatans who have sucked out of the men what little testosterone remained from the nuclear war that feminism waged against once God-fearing men.

“Harsh” men have become anathema to Christianity, and we are in the mess we are in because Christian men have been taught to act and fight like women.  Nothing against women.  I married one.  We have two daughters and five granddaughters.  I love and respect them all.  But women are not men, despite what your Pastor may model for you, and only an emergency transfusion of testosterone can save American Christianity.

I do a daily podcast designed to awaken the heart of men.  I am not writing this as a means of self-promotion but simply evidence that I walk my talk.  My career as a football coach taught me how to motivate men…what makes their heart beat fast…and what drives them to be the best they can be.  Turn on your TV and watch a football game.  Ask yourself this simple question…do any of the men I see on the field remind me of my pastor?

The answer is obvious.  Skinny jeans and poofed hair have no place on the gridiron.  The football field is a battlefield and weak men need not apply.  Does the average man sitting in America’s pews have the gonads to do what our forefathers did?  Brave Christian men forged this nation.  Soft Christian men are about to lose it.

A few years ago, I was working hard to try and convince a friend that he needed to surrender to Christ.  I told him that serving Christ was the most exciting adventure I had ever been on.  Finally, he grew tired of my overtures and kindly said to me:

“Dave, I love you and I love what you do.  But I am not interested in being a Christian because I don’t want to have to give up my balls.”

How many other men have the same reaction to Christianity?  Christianity is for sissies. Real men drive for NASCAR.  I do not want to give up my balls.

What a sad indictment of the Christian male.  A pushover, a softie, a compromiser…like it or not that is the image many Americans have of Christian men.

Ponder this.  If you were sitting on the outside looking at “churchmen” what is it about us that would draw other men?  Why would any REAL man want to give up his manhood to follow Jesus?

But they don’t have to, you see?  Christianity IS masculine.  All the heroes in the Bible were alpha males.  Even young shepherd boys slew giants.  John the Baptist was rugged.  How about, Samson, Moses, and David’s Mighty men?  Where, for God’s sake, did we get the idea that Christian men were soft?

America is under seize.  Our very way of life is under attack like no time in history.  Our compromised and sissified church leadership is incapable of mounting any opposition to the forces of darkness.  Our Pastors are in hiding from a VIRUS for Pete’s sake! Scared to death of their governor. Currently, the American Christian male is no threat to the forces of darkness ravaging this nation.

Thousands of babies are being aborted every day.  Child trafficking is more lucrative than the drug trade.  The God ordained institution of marriage has been hijacked by sexual deviants.  The future of America, our children, are herded like cattle into a government school system that teaches the exact opposite of what they are taught from the Bible. Pastors do not utter a peep as a rigged election is stolen right before their very eyes.

Rise up, O men of God! Have done with lesser things; Give heart and soul and mind and strength to serve the King of kings.

Rise up, O men of God! His kingdom tarries long; As faithful workmen, watch and pray and light the night of wrong.

Rise up, O men of God! The church for you doth wait—Your strength unequal to the task, But Christ in you is great!

Lift high the cross of Christ; Tread where His feet have trod; As brothers of the Son of man, Rise up, O men of God! —William Merrill 1911.

The average Christian male is guilty of treason…not to the government…but to the God they claim to serve.  What are you afraid of?  Stand up and fight!  Grow a pair.  Quit ye like men!

Dave Daubenmire is a veteran 35 year high school football coach who was spurred to action when attacked and sued by the ACLU in the late 1990s for praying with his high school football team. After a two year battle for his 1st amendment rights, the ACLU relented and offered coach an out of court settlement. Challenging the “church of the Status Quo”, Pass The Salt Ministries is calling Christians to wake up and engage the culture. By taking the fight to the enemy, Coach Daubenmire has become a recognizable voice in the media as he is an unashamed, articulate, apologist for the Christian worldview. A popular, high-energy speaker, Coach Daubenmire’s motivational lectures, laced with powerful and relevant Scripture, is challenging Americans all across the country. E-Mail: coach@ptsalt.com Web: https://coachdavelive.com/