MSNBC (Communist fake news outlet) Host Nicolle Wallace thinks so, and defends them: She says they are “good people” on “the side of angels.”

Isaiah 5:20 “Woe unto them that call evil good, and good evil; that put darkness for light, and light for darkness; that put bitter for sweet, and sweet for bitter!”

2nd Corinthians 11:13-15 “For such are false apostles, deceitful workers, transforming themselves into the apostles of Christ. 14 And no marvel; for Satan himself is transformed into an angel of light.15 Therefore it is no great thing if his ministers also be transformed as the ministers of righteousness; whose end shall be according to their works.”

To set the stage: 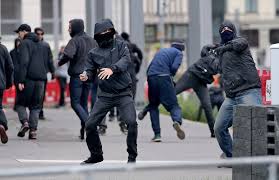 Daily Caller – MSNBC’s Nicole Wallace defended Antifa on Thursday afternoon, (9/15/17) and referred to them as “good people” on “the side of angels.”

Wallace’s comments came in response to recent remarks from President Trump, who doubled-down on his “both sides” statement regarding the violence in Charlottesville, Va. between white nationalists and “anti-fascists.”

“I think, especially in light of the advent of Antifa, if you look at what’s going on there, you have some pretty bad dudes on the other side also, and essentially that’s what I said,” Trump said on Thursday.

“There were really bad guys on the side of the KKK, and then there were good people opposing the KKK,” she said. “One of the people on the side of angels lost her life.”

The “side of angels” attacked peaceful demonstrators and law enforcement in Portland, Oregon just last weekend, which resulted in the injury of two police officers.

The stupidity of this woman who grew up Catholic, or at the very least Greek Orthodox, has no idea what she is talking about. I could not find proof she is catholic, but indications point to it. I contacted her via email and twitter with no response. She is also a graduate of the University of California, Berkeley. We all know Berkeley is a haven for snowflakes and an incubator for Antifa adherents.

She, like most, are just teleprompter readers and do no research whatsoever.  She has never been taught who and what angels really are. This bimbo of a woman probably worships angels like some many ignorant pagans do!

“The ultimate weakness of violence is that it is a descending spiral begetting the very thing it seeks to destroy, instead of diminishing evil, it multiplies it. Through violence, you may murder the liar, but you cannot murder the lie, nor establish the truth. Through violence, you may murder the hater, but you do not murder hate. In fact, violence merely increases hate. Returning violence for violence multiplies violence, adding deeper darkness to a night already devoid of stars. Darkness cannot drive out darkness; only light can do that. Hate cannot drive out hate; only love can do that.” – Martin Luther King Jr. Read more.

What angels are this Jezebel, this Silly Woman speaking of? What angel used Violence and war broke out in Heaven?

Revelation 12:7-9 “And there was war in heaven: Michael and his angels fought against the dragon; and the dragon fought and his angels, 8 And prevailed not; neither was their place found any more in heaven. 9 And the great dragon was cast out, that old serpent, called the Devil, and Satan, which deceiveth the whole world: he was cast out into the earth, and his angels were cast out with him.”

Here is a good synopsis of what Good and Bad angels are from Got Questions;

Most holy angels are not named in the Bible but are described only as “elect angels” (1 Timothy 5:21). The expressions “principalities” and “powers” seem to be used of all angels whether fallen or holy (Luke 21:26; Romans 8:38; Ephesians 1:21; 3:10; Colossians 1:16; 2:10, 2:15; 1 Peter 3:22). Some angels are designated as “cherubim,” which are living creatures who defend God’s holiness from any defilement of sin (Genesis 3:24; Exodus 25:18, 20). “Seraphim” are another class of angels, mentioned only once in Scripture in Isaiah 6:2-7, and are described as having three pairs of wings. They apparently have the function of praising God, being God’s messengers to earth, and are especially concerned with the holiness of God. Most of the references to holy angels in Scripture refer to their ministries, which are broad. Holy angels were present at creation, the giving of the Law, the birth of Christ and His resurrection, the Ascension, and they will be present at the rapture of the Church and the second coming of Christ.

In stark contrast to the company of holy angels, the fallen angels are also innumerable, though considerably less than the holy angels, and are described as fallen from their first estate. Led by Satan, who was originally a holy angel, the fallen angels defected, rebelled against God, and became sinful in their nature and work. Fallen angels have been divided into two classes: those who are free and those who are bound. Of the fallen angels, Satan alone is given particular mention in the Bible. When Satan fell (John 8:44; Luke 10:18), he drew after him one third of the angels. Of those, some are reserved in chains awaiting judgment (1 Corinthians 6:3; 2 Peter 2:4; Jude 1:6), and the remainder are free and are the demons, or devils, to whom reference is made throughout the New Testament (Mark 5:9, 5;15; Luke 8:30; 1 Timothy 4:1). They are Satan’s servants in all his undertakings and share his doom (Matthew 25:41; Revelation 20:10). Links altered to the King James Version

Yes, these Antifa members ARE just like angels, the fallen angels, the One Third who rebelled against God with Lucifer. They are being funded by none other than George Soros and the rest of the Communist Democrat Cult.

1st Peter 5:8 – Be sober, be vigilant; because your adversary the devil, as a roaring lion, walketh about, seeking whom he may devour:

Their objective is to advance the agenda of the Anti-Christ, but they will ultimately fail!

1st John 3:8 – He that committeth sin is of the devil; for the devil sinneth from the beginning. For this purpose the Son of God was manifested, that he might destroy the works of the devil.

Back to Isaiah 5:20 and the meaning of “Woe”
It means that this woman, and others like her,  who call evil good and put darkness for light are in grave danger!

What does the word “woe” mean?

It is a judgment or an emotional response to something? What’s the biblical definition of what the “woe” mentioned is Scripture.

The word “woe” is often used to express grief, regret, misfortune or grievous distress stated from such a great affliction of some sort or being in such trouble that an escape out of it seems impossible. Sometimes, a woe is almost beyond description and words fail us so a “woe” may be the only thing we can say to express our feelings, very much like when we groan. The biblical definition is even more “woeful” than I have described here as we shall read.

A Word of Judgment

The word “woe” in the Greek is “ouai” and is more than just an expression of a feeling. Woe is a judgment as we read in the Book of Revelation (chapters 8. 9, 11, and 12). It means “alas” or almost like “oh no!” When the word woe is used, it is quite possibly signifying impending doom, condemnation and/or the wrath of God so it is never used to only emphasize something in the sentence in which it is used. The context is always king when this word is used. The Hebrew word for woe is “howy” and essentially means the very same thing as it does when used in the New Testament. Jesus used the word woe more than anyone else in the Bible. The Gospel of Luke has twice as many woes (13) than the nearest book in Old Testament (Ezekiel has 6) and only Matthew has nearly as many (12). When God’s judgment upon sinful mankind is being revealed, the Apostle John writes “Woe, woe, woe to those who dwell on the earth, at the blasts of the other trumpets that the three angels are about to blow” (Rev 8:13) so he is showing the greatest significance possible by repeating it three times. Use of a word three times in the Bible is so rare that it is only done when the holiness of God is described in Revelation 4:8 and in Isaiah 6:3. Jesus used the word “woe” seven times in Matthew chapter 23 indicating a completeness of the woes (or judgments) of God as seven is the number of completion or perfection, indicating God’s judgment will be complete and perfectly just. Read the rest here.

Repent and turn from your wicked ways people.

Hebrews 10:29-31 “Of how much sorer punishment, suppose ye, shall he be thought worthy, who hath trodden under foot the Son of God, and hath counted the blood of the covenant, wherewith he was sanctified, an unholy thing, and hath done despite unto the Spirit of grace? 30 For we know him that hath said, Vengeance belongeth unto me, I will recompense, saith the Lord. And again, The Lord shall judge his people. 31 It is a fearful thing to fall into the hands of the living God.