Canadian Imam Calls for West to Submit to Taliban: Christians and Jews Are ‘Our Enemies’ 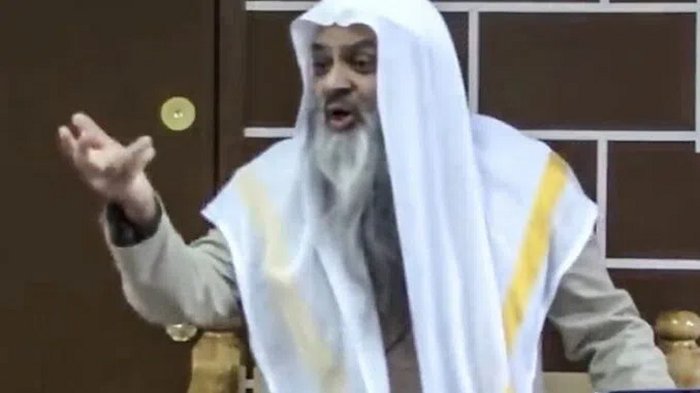 Sean Adl-Tabatabai  | News Punch – A top Canadian Imam is calling on Canadians to get behind the Tablian’s takeover of Afghanistan, declaring that Christians and Jews are “our enemies.”

Kathrada is now calling on fellow Canadians to support the Taliban and its efforts to impose sharia law across the world.

The Taliban has confirmed the country will be governed under strict sharia law – which includes the violent execution of anybody caught committing adultery or practising homosexuality.

In his speech, the Islamic scholar accused Jews and Christians of attempting to spend “mountains of gold in order to take us away from Islam.”

He gloated that these attempts are doomed to fail:

“So they will spend it but don’t fear, at the end of the day they are not going to win,” Kathrada said.

“Allah tells us that they will spend it and that it will be for them a source of regret.”

Breitbart.com reports: Kathrada then claims that the recent U.S. withdrawal from Afghanistan was a sign of the supposed prophesied failure of such attempts.

“Twenty years in Afghanistan, I don’t need to say any more,” he said.

“‘A source of regret, then they will be overcome.’ Does this sound familiar to you? Have you been listening to the news?” he asked before calling on his audience to praise Allah and demonstrate support for the recent Taliban victory.

“I incite (sic) you to show support for your brothers in Afghanistan, who want to establish the sharia in their land,” he said.

“Allah, grant victory to the mujahideen [fighting] for your sake everywhere,” he added. “Allah grant success to our brothers in Afghanistan so that they establish your shari’a on this land.”

He also accused Jews and Christians of hiding their true nature and attacking that which is most sacred to Muslims.

“They will attack what is most sacred to us but all of that [which] they do is only a small portion of what is really in their hearts, of the hatred that they have towards us in their hearts,” he said.

“Do not think that the Jews and Christians are our friends – they are our enemies,” he asserted.

The Canadian imam then attacked “the West” for its stance on women’s rights.

“We see that the West wants to talk about the rights of women … Ah, yes, her right to be a prostitute,” he said. “Her right to sleep around with whomever she wishes.”

In response, the Canadian Centre for Israel and Jewish Affairs (CIJA) expressed deep concern over the hateful rhetoric.

“We are very concerned that Canadian Imam Younus Kathrada continues his long history of spewing hatred against #Christians, #Jews, and #women,” the group wrote.

“This is #onlinehate and it needs to be addressed by law enforcement,” it added.

We are very concerned that Canadian Imam Younus Kathrada continues his long history of spewing hatred against #Christians, #Jews, and #women. This is #onlinehate and it needs to be addressed by law enforcement. #cdnpoli https://t.co/vKFtVePEpP

This is not Kathrada’s first time expressing radical and hateful rhetoric.

In October, he vilified French schoolteacher Samuel Paty who was murdered by a Muslim youth for showing Charlie Hebdo cartoons depicting the Islamic prophet Mohammed to his class.

After referring to Paty as “cursed,” “evil-spirited,” and a “filthy excuse for a human-being,” Kathrada implored Allah to annihilate those who slander Mohammed.

On September 11 of last year, Kathrada stated that disrespect of Mohammed is worse than police killings of black citizens in the U.S.

In 2018, Kathrada said Muslims should be offended by those who worship Jesus and that wishing non-Muslims a “Merry Christmas” is a far graver sin than murder, adultery, lying, and any other major sins.

The Taliban is infamous for its harsh treatment of those under its control.

On Thursday, senior Taliban leader Waheedullah Hashimi said the group would not implement democracy in Afghanistan because Afghan culture and Islamic sharia law do not support such a political system.

“There will be no democratic system at all because it does not have any base in our country. We will not discuss what type of political system we should apply in Afghanistan because it is clear. It is sharia law and that is it,” Hashimi told Reuters.

The Taliban’s rise has been a growing concern for various groups, including ethnic and religious minorities, within Afghanistan.

Amnesty’s Secretary-General Agnès Callamard said, “The cold-blooded brutality of these killings is a reminder of the Taliban’s past record, and a horrifying indicator of what Taliban rule may bring.”

Taliban spokesman Zabihullah Mujahid told reporters in a press conference Tuesday that the terrorist organization is urging all women in Afghanistan to stay home for their safety as the group has not yet taught its own terrorists “how to deal with women.”

This month, the Taliban went “door-to-door” in some regions of Afghanistan to select girls as young as twelve to become “sex slaves” for the group’s jihadi fighters, News Corp Australia’s News.com.au reported.

Last Monday, a 33-year-old woman who claimed to have been brutalized by the Taliban after she was shot by the insurgents and her eyes gouged out in Afghanistan’s Ghazni province in 2020, said that to them “women are not living, breathing human beings, but merely some meat and flesh to be battered.”

Christians, too, are also reportedly in danger.

The Barnabas Fund, which monitors Christian persecution around the world, warned Tuesday that Christians remaining in Afghanistan “are very likely to be killed” if caught by the Taliban, which applies sharia law literally.