This is a great example of the Jezebel Spirit that has been  Manifesting greatly out of these Communist Harlots and is at a fever pitch.

Note in the article that the man just sat there and took this venomous lashing from this crazed Jezebel. Would that happen in my house? NOT A CHANCE! 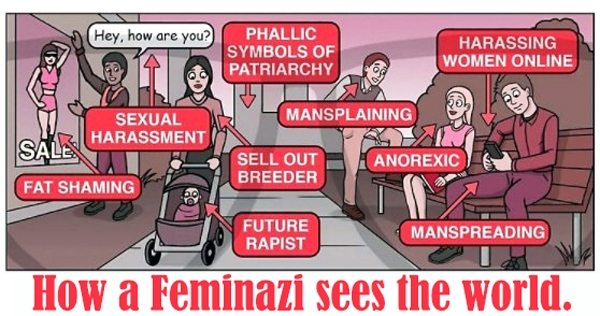 Isaiah 32:5-8 “The vile person shall be no more called liberal, nor the churl said to be bountiful. 6 For the vile person will speak villany, and his heart will work iniquity, to practice hypocrisy, and to utter error against the LORD, to make empty the soul of the hungry, and he will cause the drink of the thirsty to fail. 7 The instruments also of the churl are evil: he deviseth wicked devices to destroy the poor with lying words, even when the needy speaketh right. 8 But the liberal deviseth liberal things; and by liberal things shall he stand.”

These Democrats are NO LONGER LIBERALS. They are VIAL Communist. They are mere Silly Women! 2nd Timothy 3:6-7

Another point I would like to make is this. Feminism is really Witchcraft!  Witchcraft and Witches becoming more Mainstream riding the Wave of Feminism

Think that is Crazy? Read this one! Witches Outnumber Presbyterians in the US; Wicca, Paganism Growing ‘Astronomically’

FOTM – Nearly a hundred years after the suffragettes won women the right to vote with the passage of the 19th Amendment in 1920, this is what feminism has degenerated into.

Note: In 1869, Wyoming was the first U.S. state to grant women voting rights.

Victoria Bissell Brown, 69 (she will be 70 in January), is a retired history professor at Grinnell College, a private liberal arts college in Grinnell, Iowa. She now lives in Havertown, PA, with her 71-year-old husband, James Wilton Brown.

Victoria Brown completely bought Christine Blasey Ford’s lying testimony at the Senate hearing on now-Justice Brett Kavanaugh’s nomination to the Supreme Court, although Ford has no corroborating witnesses and cannot remember the date or place of the alleged sexual assault.

Below is Brown’s Oct. 12 op-ed in the Washington Post, “Thanks for not raping us, all you ‘good men.’ But it’s not enough,” describing her spitting rage at her thoroughly browbeaten husband, whom she admits is a “good man”:

I yelled at my husband last night. Not pick-up-your-socks yell. Not how-could-you-ignore-that-red-light yell. This was real yelling. This was 30 minutes of from-the-gut yelling. Triggered by a small, thoughtless, dismissive, annoyed, patronizing comment. Really small. A micro-wave that triggered a hurricane. I blew. Hard and fast. And it terrified me. I’m still terrified by what I felt and what I said. I am almost 70 years old. I am a grandmother. Yet in that roiling moment, screaming at my husband as if he represented every clueless male on the planet (and I every angry woman of 2018), I announced that I hate all men and wish all men were dead. If one of my grandchildren yelled something that ridiculous, I’d have to stifle a laugh.

My husband of 50 years did not have to stifle a laugh. He took it dead seriously. He did not defend his remark, he did not defend men. He sat, hunched and hurt, and he listened. For a moment, it occurred to me to be grateful that I’m married to a man who will listen to a woman. The winds calmed ever so slightly in that moment. And then the storm surge welled up in me as I realized the pathetic impotence of nice men’s plan to rebuild the wreckage by listening to women. As my rage rushed through the streets of my mind, toppling every memory of every good thing my husband has ever done (and there are scores of memories), I said the meanest thing I’ve ever said to him: Don’t you dare sit there and sympathetically promise to change. Don’t say you will stop yourself before you blurt out some impatient, annoyed, controlling remark. No, I said, you can’t change. You are unable to change. You don’t have the skills and you won’t do it. You, I said, are one of the good men. You respect women, you believe in women, you like women, you don’t hit women or rape women or in any way abuse women. You have applauded and funded feminism for a half-century. You are one of the good men. And you cannot change. You can listen all you want, but that will not create one iota of change.

In the centuries of feminist movements that have washed up and away, good men have not once organized their own mass movement to change themselves and their sons or to attack the mean-spirited, teasing, punching thing that passes for male culture. Not once. Bastards. Don’t listen to me. Listen to each other. Talk to each other. Earn your power for once.

The gender war that has broken out in this country is flooding all our houses. It’s rising on the torrent of memories that every woman has. Those memories have come loose from the attic and the basement where we’ve stashed them. They are floating all around us and there is no place left to store them out of sight. Not just memories of sexual abuse. Memories of being dismissed, disdained, distrusted. Memories of having to endure put-downs at the office, catcalls in the parking lot, barked orders at a dinner party. And, for some reason, the most chilling memory of all, the one Christine Blasey Ford called up and that we all recognized: the laughter. The laughter of men who are bonding with each other by mocking us. When Ford testified under oath that the laughter is the sharpest memory of her high school assault, every woman within the sound of her voice could hear that laughter, had heard that laughter, somewhere, somehow.

No man right now understands the flood that is rushing through women’s brains, and only women in the deepest denial have evacuated their minds before the flood could reach them.

When good men like Sen. Christopher A. Coons (D-Del.) give heartfelt, sincere speeches about how we must listen to women, I don’t know whether to coo or laugh or cry or yell. Think about “listen to women” as a program for change. It says to women: You will continue to suffer these abuses, men will continue to do disgusting things to you, the storms will keep coming, the tide will continue to rise, but now, we will listen and help you rebuild.

Pay attention people: If we do not raise boys to walk humbly and care deeply, if we do not demand that men do more than just listen, we will all drown in the flood. And there is no patriarchal Noah to save us.

Were he not already gelded and fitted with a pussy hat, Victoria Brown’s husband should have her arrested for spousal and elder abuse.

Posted with permission from Fellowship of the Minds

The Prophet Samuel told Saul before he became king: 1st Samuel 15:23 “For rebellion is as the sin of witchcraft, and stubbornness is as iniquity and idolatry. Because thou hast rejected the word of the LORD, he hath also rejected thee from being king.”

Women who rebel against the Family Structure and the Word of God are Rebellious, Stubborn and therefore are practicing Idolatry and Witchcraft!!! Feminism, Lesbianism and the #MeToo garbage is right out of the pit of HELL!

No, she will never be happy as long as that Jezebel demon is possessing her. What her problem really is she hates God and man is mage in the image of God!!! 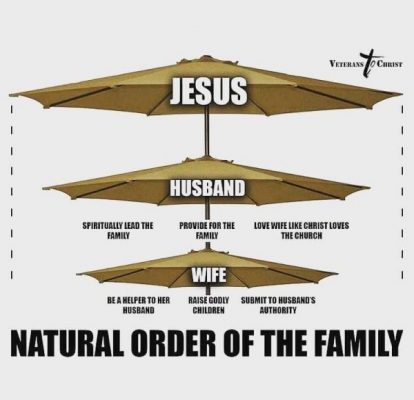