You can bet this Faux Church leadership is filled with UN-Saved Sexual Perverts, and Ichabod is written over the door!

What Circle of Hell is This? Video captures sacrilegious LGBTQPXYZ event held at Episcopalian church in downtown Manhattan.

Footage of the April 27 event which took place in downtown Manhattan surfaced last week, featuring Grace Church High School students inside the historic Grace Church as a drag queen named “Brita Filter” (AKA Jesse Havea) gayly paraded down the aisle as if it was a fashion runway.

“Dear Lord, which circle of Dante’s inferno is this? This meant to be the house of God but…” one gobsmacked Twitter user captioned video of the event.

“There was tons of social pressure to dance along and pretend like it was normal for sure,” the unidentified student said, adding, “whether it be people tapping on shoulders and telling them to stand up or just a collective staring contest at whoever wasn’t totally participating.”
Only your patronage to our store is what keeps this beacon of truth lit in the controlled-narrative darkness.

The student continued: “I wondered, is this really happening in a chapel?” and said there was “tons of social pressure to dance along and pretend that this was normal for church.”

“Immediately upon entering there was a person handing out stickers with Pride flags on them, un-ironically saying ‘take one or you’re homophobic,’” the student added.

“One student reported that as the performer approached the altar, he was joined by more dancing students, some of them ‘twerking,’” the Post Millennial reported.

The event, which ran long, was reportedly “mandatory for all students in grades 9-12,” according to the Post Millennial.

After a rendition of “Somewhere Over the Rainbow,” Brita Filter reportedly discussed his nationality and pansexuality, all the while repeatedly saying he was “fabulous and talented and beautiful,” noted one student.

A transgender teacher, Uyen Nguyen, also used the event as an opportunity to announce their resignation for allegedly being repeatedly “misgendered” by school staff.

The church also evidently promoted the event on their website. 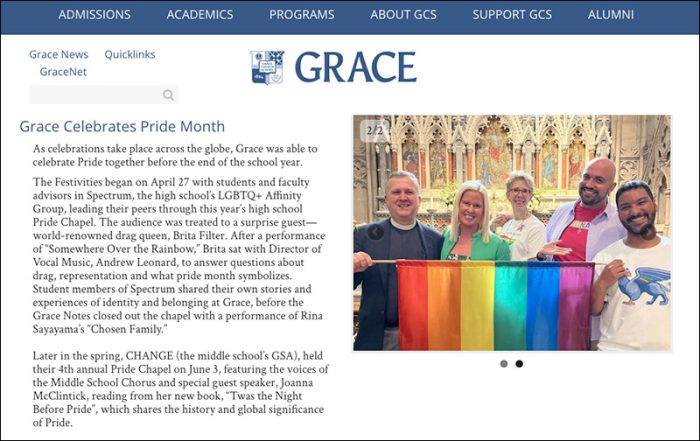