James 1:5-8 “If any of you lack wisdom, let him ask of God, that giveth to all men liberally, and upbraideth not; and it shall be given him. 6 But let him ask in faith, nothing wavering. For he that wavereth is like a wave of the sea driven with the wind and tossed. 7 For let not that man think that he shall receive any thing of the Lord. 8 A double minded (Wo)man is unstable in all his ways. 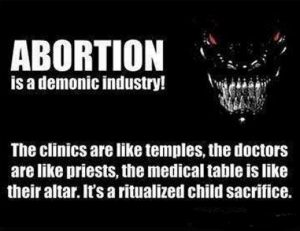 Breitbart News – A woman who aborted her twins on screen in a recent PBS documentary commented she was “honored to be given this gift of life” and then said it was inconvenient for her to allow the twins to live.

The Frontline documentary, which focused on changes in the abortion industry over the last 30 years, featured a scene in which the woman aborted her twins using the abortion drug mifepristone, or RU-486.

“What I hope I feel is a sense of peace, not only with myself and the decision that I’ve made, but also a sense of peace with these two beings that I’ve chosen not to bring into the world,” the woman said on camera. “Thank you for choosing me, and I’m honored to be given this gift of life, and also I can’t do it right now. I can’t accept that mantle in terms of the other lives that I’m taking care of and I’m responsible for.”

This PBS documentary airbrushes abortion to make it look like some healthy new age practice.

The women in blue is pregnant with twins and she is filmed here taking the abortion pill to kill them. You witness their killing😢
And her statement at the end is chilling. pic.twitter.com/NxL7w36hYI

“This PBS documentary airbrushes abortion to make it look like some healthy new age practice,” Ekeocha posted. “The women in blue is pregnant with twins and she is filmed here taking the abortion pill to kill them. You witness their killing … And her statement at the end is chilling.”

In the documentary, Philadelphia Women’s Center abortionist Dr. Rebecca Mercier, who administered the mifepristone to the woman, referred to the unborn twins as “pregnancy tissue.”

I am stuck on the words "pregnancy tissue". #abortionisnotthealthcare and those abortion providers strategically withheld crucial information on what the procedure actually does and what that "tissue" consisted of. So sad.

Mercier said medical — rather than surgical — abortion is “a great procedure for women who want to feel like they have control over the procedure.”

Former abortionist Dr. Anthony Levatino explains in the video below what occurs during the first trimester medical abortion:

According to the documentary, about one-third of all abortions in Pennsylvania are achieved using mifepristone and misoprostol, the latter of which is taken 24 to 48 hours after the mifepristone and, as Mercier explained, causes uterine contractions and bleeding until the unborn baby is expelled from the uterus.

Planned Parenthood says it charges “up to $1,000” for the “abortion pill” procedure, up $200 from its cost nearly three years ago.

Twitchy observed other Twitter users also found the woman’s words, after taking the abortion drug to end the lives of her twins, “chilling”: