An Iraqi Christian experienced a series of miracles while persecuted for his faith at the hands of Islamic extremists, including an encounter with Jesus and surviving terrorists’ attempts to burn him alive — three times. 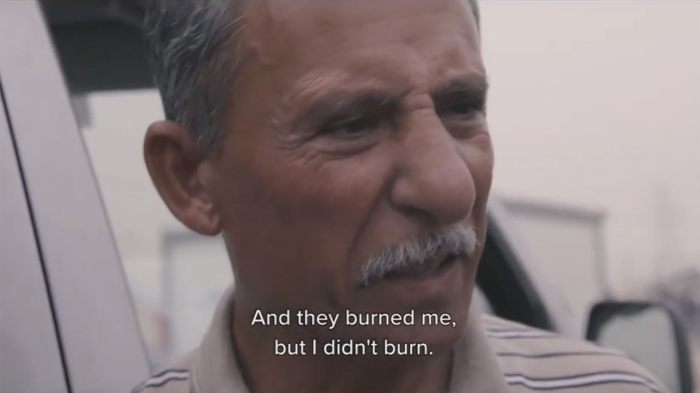 It would behoove Muslims to read the Third Chapter of Daniel and heed the reaction of Nebuchadnezzar.

Christian Post – The Yazidi man was interviewed for a documentary, “Heart and Hands: Iraq,” by Sean Feucht, head of the non-profit Light A Candle Project, and Bethel Music. In it, Feucht travels the world to hear the stories of those persecuted for their faith.

In a preview of the documentary aired at the Heaven Come conference in LA, the Yazidi man reveals there was “pressure” from ISIS to convert to Islam. But amid persecution, Jesus appeared to him in a dream.

“Thanks be to God for that,” he said. “He spoke to me…[but] I cannot tell you what He said. It’s a promise between me and Christ.”

“I asked Jesus one thing,” he continued. “And He answered me.”

Later in the interview, the man revealed that once ISIS found out he was a follower of Christ, they began stoning him.

“They were hitting me with big rocks on my body,” he recalled. “The stones were fine, not affecting me.”

The man said that after stoning him, ISIS members drenched him in 20 gallons of gasoline. But even though he was burned alive a total of three times, he said he somehow survived unharmed.

“And they burned me, but I didn’t burn,” he said, crediting Jesus for his miraculous survival.

The Yazidi man was one of many Christians interviewed by Feucht, who said he believes he is “called to the most persecuted, closed, dark, marginalized places,” Fox News reports.

Feucht said he is encouraged by the growth of the church in Iraq, China, and India — three countries where it’s most difficult to be a Christian, according to persecution watchdog Open Doors USA.

“Our team’s in Iraq right now, and the U.S. State Department just sent out this notification that said ‘All US personnel leave Iraq’ and all the NGOs left but our guys are still there. We were there through ISIS. We’ve been there through the worst of the worst,” Feucht said. “Everyone thought we were crazy. Right as everyone was leaving, we came in, and because of it, we have a thriving, flourishing project there.”

Feucht said that so far, his group has raised over $100,000 to distribute food, blankets, mattresses, and other materials, as well as offering trauma therapy counseling and kids programs, teaching music, and praying with persecuted Christians in the region.

“We want to re-define missions for a generation to where we’re actually the first ones to respond,” Feucht said. “That’s the essence of the gospel to go into places where no one else is willing to go.”

The genocide also impacted Iraq’s Yazidi minority. An estimated 60,000 Yazidis fled to Europe while there are still about 550,000 Yazidis still in Iraq with 280,000 of them remaining displaced.

In October, the U.S. Agency for International Development announced it would partner with the nation’s leading Catholic fraternal organization, Knights of Columbus, to bring support to persecuted communities in Iraq.

Joseph Cullen, the spokesperson for the Knights of Columbus, told The Christian Post that the organization has so far committed more than $25 million in support of persecuted Christians and those in their care in the Middle East. This, he said, has provided food, clothing, shelter, education, medical care, building or rebuilding of homes and other services.

But unless Christians in the United States and elsewhere continue to support those persecuted or suffering from the effects of persecution, these communities “could literally cease to exist,” he warned.

“Likewise, U.S. government support for those communities targeted for genocide in the Middle East — including Christians — remains crucial, both in terms of projects that benefit these communities, and in terms of support for their security, which has been imperiled most recently by militia groups in northern Iraq,” he said. Read more here

We need more men and women who are True Christians who will NOT bow down to Allah or any other false God. As Shadrach, Meshach, and Abednego said;  ” If it be so, our God whom we serve is able to deliver us from the burning fiery furnace, and he will deliver us out of thine hand, O king. 18 But if not, be it known unto thee, O king, that we will not serve thy gods, nor worship the golden image which thou hast set up.”