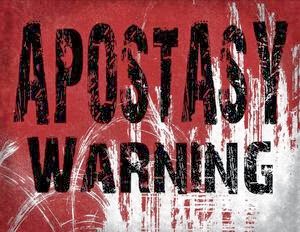 James 4:4 “Ye adulterers and adulteresses, know ye not that the friendship of the world is enmity with God? Whosoever therefore will be a friend of the world is the enemy of God.”

The Worldly Church. God, Jesus and the Holy Spirit are not in these Apostate Churches. They have left the building and so should you. Ichabod is written over the door post! I am so glad I saw the light and got out of the Southern Baptists many years ago!

As they say “ a fish rots from the head down”!

It is pretty obvious that the heads of the southern baptists are rotten to the core!

As Charles  Spurgeon said “A time will come when instead of shepherds feeding the sheep, the church will have clowns entertaining the goats!”

Got Questions – The term Ichabod is found in two places in the Bible,1 Samuel 4:21 and 14:3. Ichabod was the son of Phinehas and the grandson of Eli, the priest of the Lord in Shiloh. The sad story of Eli and his two wayward sons, Phinehas and Hophni, is found in 1 Samuel, chapters 2 and 4. Hophni and Phinehas died in battle with the Philistines who captured the Ark of the Covenant and took it away from Israel. Upon hearing this terrible news, Eli fell backward off his chair and broke his neck and died. Phinehas’s pregnant wife went into labor and bore a son.

“And she named the child Ichabod, saying, ‘The glory has departed from Israel!’ because the ark of God had been captured and because of her father-in-law and her husband. And she said, ‘The glory has departed from Israel, for the ark of God has been captured’” (1 Samuel 4:21–22). The word Ichabod means literally “inglorious” or “there is no glory,” and in her pain and despair, the woman (who is unnamed in Scripture) lamented over the loss of the glory of God from Israel.

The glory of God is used to describe God’s favor and blessings toward His people. In the Old Testament, God’s glory is seen as a pillar of fire and cloud that followed the Israelites during the exodus from Egypt, guiding and guarding them (Exodus 13:21). Once the Ark of the Covenant was built and placed in the tabernacle in the wilderness, and later in the temple in Jerusalem, God’s glory resided there as a symbol of His presence among His people. When the Ark was captured by the Philistines, the glory departed from the Israelites—Ichabod became a reality.

Jesus later refers to the concept of the glory of God leaving Israel. In His last message to the populace of Israel, His final word to the religious leaders was “O Jerusalem, Jerusalem, you who kill the prophets and stone those sent to you, how often I have longed to gather your children together, as a hen gathers her chicks under her wings, but you were not willing. Look, your house is left to you desolate” (Matthew 23:37–38). That was His final statement of judgment on Israel for the rejection of their Messiah. He has indicted their leaders and, by indicting the leaders, indicted all the people who followed the leaders. And now He says their house is left desolate—Ichabod, the glory is departing.

Notice that He says your house is desolate. Not My house, not My Father’s house, as He used to call it. Now it’s your house because God has left—Ichabod! God is no longer there, it’s not the Father’s house; it’s not My house; it’s your house. The Greek word translated “desolate,” means “abandoned to ruin.” This place is in abandonment. God has left. It’s cursed, devoted to ruination. And they won’t see Jesus again till He comes in full Messianic glory (Matthew 23:39).

It is a terrible thing to experience the loss of the glory of God. And while Israel’s ruin was temporary “until the fullness of the Gentiles” would be brought into the kingdom of God on earth (Romans 11:25), one wonders how many churches today have lost the glory of the Lord, whether willingly or unknowingly. The same things that caused Ichabod in Israel—sin, disobedience, idolatry—are present in many of today’s churches. Christians must never take the glory of God in our midst for granted, lest we wake up one day and find that Ichabod has become a reality among us. Source: Got Questions

And it is no wonder as the Baptists, Southern Baptists to be specific,  are just as perverted as the Catholics!  Wolves in the Fold: Perverted Baptists

Heather Clark | Christian News –  Top leaders of the Southern Baptist Convention took to the stage on Monday during the North American Mission Board’s (NAMB) “Send Luncheon,” and donning wigs, hats and electric guitars, sang karaoke to the Lynyrd Skynyrd hit “Sweet Home Alabama” for the thousands of pastors who had gathered for the event. Video footage of the performance, which is a part of the 2019 annual Southern Baptist Convention, has generated concern that the SBC is “sliding into apostasy.”

“Sweet home Alabama, where the skies are so blue,” they sang out, with the lyrics appearing on the screen behind them and the name Lynyrd Skynyrd in large letters.

According to reports, the five Southern Baptist leaders who put on the karaoke performance were:

The event was held at the Birmingham-Jefferson Convention Complex in Alabama, and is presented in conjunction with the annual Southern Baptist Convention meeting.

This year’s gathering is to include a presentation by the Southern Baptist Sexual Abuse Advisory Study, a commissioned report that seeks to address the problem of sexual abuse within SBC churches and to “illuminate the evil that has occurred within our midst by sharing the stories of survivors of sexual abuse.”

Hundreds of childhood sexual abuse survivors were reportedly interviewed for the study.

In February, concerns were also generated among some as current SBC President J.D. Greear was recorded singing Whitney Houston’s “I Wanna Dance With Somebody” during a youth event.

“I wanna dance with somebody. I wanna feel the heat with somebody,” he sang and danced after being introduced as “Pastor J.D. Greear, a.k.a. Whitney Houston.”

President Greear, the pastor of The Summit Church in Durham, North Carolina and author of books such as “Gaining by Losing: Why the Future Belongs to Churches That Send,” was joined on stage by two others who likewise belted out the tune as they danced together on stage. The audience laughed and cheered.

“You don’t win people to Christ by being like the world. People are won to Christ by sharing the gospel. Being unlike Christ confuses people who don’t know Him,” one commenter said of the recording. “I’ve heard many pastors say, ‘the evangelistic methodology you win them with is a methodology a church will have to maintain to keep them.’”

Similar remarks were made in regard to Monday’s Send Luncheon, an event that described on the NAMB website as featuring “great stories of how and where God is at work in North America.”

“The SBC has started the slide to apostasy. It grieves me greatly,” one viewer said.

“Trying to become relevant, they became anything but,” another remarked.

“Entertaining the goats,” a third lamented.

“At a time the SBC is seeing almost 1000 churches die a year, when conversions and baptisms are at a 70 year low, this is their plan? Romancing the world? I guess they just don’t have the stomach to be genuine Christ followers (you will be hated for My name’s sake),” another mourned.

Ryan Denton of Christ in the Wild Ministries, who formerly served as a Southern Baptist pastor in New Mexico, told Christian News Network that he is troubled about the direction of the Convention.

“As a former SBC pastor and graduate of an SBC seminary, I’m very concerned with the direction of the SBC. A lot of people and churches are leaving the SBC because of their laxity when it comes to theological commitment and a desire to be set apart from the world,” he said.

“I think for the most part the SBC has become very cheesy,” Denton opined. “It has gone the route of liberalism in many ways, thinking that in order to fill pews and get people’s favor they need to act like the world and pander to social agendas.”

He said that he perceives that some Southern Baptist leaders are more interested in pandering to the people than pleasing God.

“It’s shameful to see Christian leaders act this way. They’ve replaced God’s way with the world’s way when it comes to growing a church or a denomination. Not trusting in Bible preaching and prayer, they turn to rock music and comedy,” Denton remarked. “Then they turn around and ask for God’s blessing.”

Denton, an open air preacher who conducts gospel outreaches at universities, homeless shelters, abortion facilities and other locations, said that the founders of the Southern Baptist Convention would not have behaved in such a manner.

“Some may say it’s not a big deal, but that’s exactly what’s wrong with the denomination. It’s become lighthearted and silly,” he stated. “It’s a far cry from the mindset of the founders. Those men fasted and were set apart from the world. They didn’t apologize for being serious about the gospel. They didn’t care if the news or the world was upset with them. Their business was gospel preaching and prayer.”

“Now the SBC seems more concerned with what politicians, news anchors, and carnal churchgoers think than they do God Almighty,” Denton lamented. “That’s what’s motivating the decisions to play rock music at their most important convention of the year: Please like us. Please think we’re funny. Please come to our churches. Please attend our seminaries. We’ll have fun. We’ll be really nice. It’s tragic, really. Far cry from the ways of Christ and the apostles.”

James 4:4 reads, “Ye adulterers and adulteresses, know ye not that the friendship of the world is enmity with God? Whosoever therefore will be a friend of the world is the enemy of God.”

2 Corinthians 6:17-18 exhorts, “Wherefore come out from among them and be ye separate, saith the Lord, and touch not the unclean thing, and I will receive you. And will be a Father unto you, and ye shall be my sons and daughters, saith the Lord Almighty.”