Hey Folks, have you ever considered this? 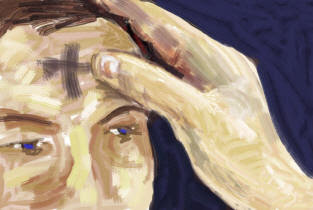 Revelation 13:16-18 “And he causeth all, both small and great, rich and poor, free and bond, to receive a mark in their right hand, or in their foreheads: 17 And that no man might buy or sell, save he that had the mark, or the name of the beast, or the number of his name. 18 Here is wisdom. Let him that hath understanding count the number of the beast: for it is the number of a man; and his number is Six hundred threescore and six.”

Or perhaps the Mark of Cain? Genesis 4:15 “And the LORD said unto him, Therefore whosoever slayeth Cain, vengeance shall be taken on him sevenfold. And the LORD set a mark upon Cain, lest any finding him should kill him.” More on that later!

Also see: Easter a Pagan Celebration?  and  Ordinances and Sacraments: Do they have anything to do with Salvation?

Church offers drive-thru ashes for Ash Wednesday Making it convenient for those who don’t have time to attend services.

(WXYZ) — SOUTHFIELD, Michigan — One church is making it convenient for those who do not have time to attend Ash Wednesday services.

A robed minister will be standing outside in front of St. David’s Episcopal Church on Ash Wednesday, ready to administer ashes to motorists.

A common tradition of Ash Wednesday, marking an ashen cross on the foreheads of believers usually is performed during a service inside Christian churches at the beginning of the penitential spiritual season of Lent. This year, St. David’s is offering ashes both inside and outside the church. Read the full story here

Perhaps one day it will be attended by BlessU-2, or another kind of Robot Priest!

It is in fact mere Churchianity: “Christians doing Christian activity based on the concepts of man! This is Modern Christianity” – Jon Watkins  It is NOT the True Gospel of Jesus Christ!

Ephesians 2:8-9 “For by grace are ye saved through faith; and that not of yourselves: it is the gift of God: 9 Not of works, lest any man should boast.”

Lent is a period of fasting, moderation, and self-denial traditionally observed by Catholics and some Protestant denominations. It begins with Ash Wednesday and ends with Easter Sunday. The length of the Lenten fast was established in the 4th century as 46 days (40 days, not counting Sundays). During Lent, participants eat sparingly or give up a particular food or habit. It’s not uncommon for people to give up smoking during Lent, or to swear off watching television or eating candy or telling lies. It’s six weeks of self-discipline.

Lent began as a way for Catholics to remind themselves of the value of repentance. The austerity of the Lenten season was seen as similar to how people in the Old Testament fasted and repented in sackcloth and ashes (Esther 4:1-3; Jeremiah 6:26; Daniel 9:3).

However, over the centuries Lenten observances have developed a much more “sacramental” value. Many Catholics believe that giving something up for Lent is a way to attain God’s blessing. But the Bible teaches that grace cannot be earned; grace is “the gift of righteousness” (Romans 5:17). Also, Jesus taught that fasting should be done discreetly: “When you fast, do not look somber as the hypocrites do, for they disfigure their faces to show men they are fasting. I tell you the truth, they have received their reward in full. But when you fast, put oil on your head and wash your face, so that it will not be obvious to men that you are fasting, but only to your Father, who is unseen” (Matthew 6:16-18). Jesus’ command to “wash your face” seems to conflict with the practice of rubbing ashes on one’s face on Ash Wednesday.

Fasting can be a good thing, and God is pleased when we repent of sinful habits. There’s absolutely nothing wrong with setting aside some time to focus on Jesus’ death and resurrection. However, repenting of sin is something we should be doing every day of the year, not just for the 46 days of Lent.

If a Christian wishes to observe Lent, he is free to do so. The key is to focus on repenting of sin and consecrating oneself to God. Lent should not be a time of boasting of one’s sacrifice or trying to earn God’s favor or increasing His love. God’s love for us could not be any greater than it already is. Source: Got Questions

Do you know that putting ashes on your forehead does nothing but help identify you as an Idiot to those who know the truth about the practice?

By doing so you “ do not your alms before men, to be seen of them” and you are “sounding a trumpet before thee, as the hypocrites do”! You are NOT holy, and there is NO forgiveness of sin and you are NOT doing Penitence for those sins. Only by realizing that you are a SINNER (Romans 3:23), Repenting of those sins the Biblical way (Acts 3:19 – 1st John 1:9 – Luke 13:3), and accepting Jesus Christ as your Lord and Savior, then you are forgiven and will enter into heaven, IF, IF you are sincere and turn your life 180 degrees and turn from your wicked ways! 2nd Chronicles 7:14

What is Ash Wednesday?

Got Questions – Ash Wednesday is the first day of Lent. Its official name is “Day of Ashes,” so called because of the practice of rubbing ashes on one’s forehead in the sign of a cross. Since it is exactly 40 days (excluding Sundays) before Easter Sunday, it will always fall on a Wednesday—there cannot be an “Ash Thursday” or “Ash Monday.” The Bible never mentions Ash Wednesday—for that matter, it never mentions Lent.

Lent is intended to be a time of self-denial, moderation, fasting, and the forsaking of sinful activities and habits. Ash Wednesday commences this period of spiritual discipline. Ash Wednesday and Lent are observed by most Catholics and some Protestant denominations. The Eastern Orthodox Church does not observe Ash Wednesday; instead, they start Lent on “Clean Monday.”

While the Bible does not mention Ash Wednesday, it does record accounts of people in the Old Testament using dust and ashes as symbols of repentance and/or mourning (2nd Samuel 13:19; Esther 4:1; Job 2:8; Daniel 9:3). The modern tradition of rubbing a cross on a person’s forehead supposedly identifies that person with Jesus Christ.

If a Christian decides to observe Ash Wednesday and/or Lent, it is important to have a biblical perspective. Jesus warned us against making a show of our fasting: “When you fast, do not look somber as the hypocrites do, for they disfigure their faces to show men they are fasting. I tell you the truth, they have received their reward in full. But when you fast, put oil on your head and wash your face, so that it will not be obvious to men that you are fasting, but only to your Father, who is unseen” (Matthew 6:16-18). We must not allow spiritual discipline to become spiritual pride.

It is a good thing to repent of sinful activities, but that’s something Christians should do every day, not just during Lent. It’s a good thing to clearly identify oneself as a Christian, but, again, this should be an everyday identification. And it is good to remember that no ritual can make one’s heart right with God. Source: Got Questions

It also just may be akin to the Mark of Cain! Of course, we don’t know what  the mark on Cain was,  if it was on his forehead or was permanent. Marking yourself in anyway, be it ashes or even a tattoo is NOT Biblical and merely religious idiocy!

Genesis 4:13-16 “And Cain said unto the LORD, My punishment is greater than I can bear. 14 Behold, thou hast driven me out this day from the face of the earth; and from thy face shall I be hid; and I shall be a fugitive and a vagabond in the earth; and it shall come to pass, that every one that findeth me shall slay me. 15 And the LORD said unto him, Therefore whosoever slayeth Cain, vengeance shall be taken on him sevenfold. And the LORD set a mark upon Cain, lest any finding him should kill him. 16 And Cain went out from the presence of the LORD, and dwelt in the land of Nod, on the east of Eden.”

Cain would NOT adhere to God’s way of offering up sacrifice, (Genesis 4:5) and he became jealous of Abel’s favor from God, so he killed his brother! (Genesis 4:80)

YOU are rebelling against God, and adhering to Cain’s way of thinking when you support the false religion you are adhering to! You are rejecting God’s Son, (John 3:16) Jesus Christ and what he did on the Cross (John 14:6) when you go along with Man-Made Religion and the sacraments it prescribes!

Marking yourself with with Ashes COULD BE the same thing as God marking Cain and driving him out of Eden, and could very well get you banned from Heaven!

What was the mark that God put on Cain?

Got Questions – After Cain killed his brother Abel, God declared to Cain, “Now you are under a curse and driven from the ground, which opened its mouth to receive your brother’s blood from your hand. When you work the ground, it will no longer yield its crops for you. You will be a restless wanderer on the earth” (Genesis 4:11-12). In response, Cain lamented, “My punishment is more than I can bear. Today you are driving me from the land, and I will be hidden from your presence; I will be a restless wanderer on the earth, and whoever finds me will kill me” (Genesis 4:13-14). God responded, “Not so; if anyone kills Cain, he will suffer vengeance seven times over.” Then the Lord put a mark on Cain so that no one who found him would kill him” (Genesis 4:15-16).

The nature of the mark on Cain has been the subject of much debate and speculation. The Hebrew word translated “mark” is ‘owth and refers to a “mark, sign, or token.” Elsewhere in the Hebrew Scriptures, ‘owth is used 79 times and is most frequently translated as “sign.” So, the Hebrew word does not identify the exact nature of the mark God put on Cain. Whatever it was, it was a sign/indicator that Cain was not to be killed. Some propose that the mark was a scar, or some kind of tattoo. Whatever the case, the precise nature of the mark is not the focus of the passage. The focus is that God would not allow people to exact vengeance against Cain. Whatever the mark on Cain was, it served this purpose.

Religion Vs being Born Again  – Are you Religious? Every Human Being needs to Lose their Religion!