Jezebel Harlot likens a Fetus to a Parasite

Apparently, the phrase “my body my choice” only applies to those who are part of the liberal consensus.

“Pro-choice” advocates protesting Missouri’s abortion ban shove Millie Weaver and try to get her forcibly removed by calling the cops because they didn’t like her asking them questions. 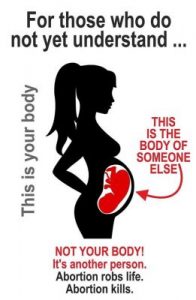 Brandon Morse | Red State – Every time pro-life chat surfaces in the news, I see stupid people try to justify abortions by any means possible. With the March for Life in full swing, you can bet the pro- abortion crowd has surged forth on social media and put their dumbest foot forward in order to combat the growing menace of people who don’t want babies to be killed.

One of my favorite excuses the pro- abortion crowd uses is the reasoning that a baby is essentially a parasite, and if a woman wants to rid herself of a parasite, who am I to tell her she can’t?

And if a woman chooses to expel something that is growing inside of her like a parasite, she has the right to do so. #MarchforLife

But that’s where the similarities end, and the glaring fact that a baby is not a parasite begins.

Like a cloud in the sky is not actually floating cotton because it’s white and fluffy, a baby is not a parasite just because its a growing organism inside someone’s body. Bearing some similarities does not a perfect comparison make, especially due to the starkness of its differences. Just because I can kill the electricity by shooting at powerlines, it doesn’t make my AR-15 a light switch.

For one, a baby in the womb is homospecific. This means that both mommy and baby are the same species, and mommy’s body is specifically geared to gestate a baby of her own species while it lives inside her. The same cannot be said of a tapeworm. A mother’s body naturally works to strengthen baby, help it grow, prepares for its arrival and departure, and even afterward works to sustain baby by providing it with milk and an instinctive bond that urges the mother to protect and love her baby.

A parasite does not get the same treatment. To the host body, the parasite is the enemy, and it will work hard to kill it. The parasite has a whole plethora of evasion strategies to avoid the plethora of weapons the host body uses against it. Like an episode of Tom and Jerry, the host and the parasite attempt consistently to harm the other, with the thriving parasite often getting the upper hand and making the host very sick. Read more here