There is “no official definition” of a woman according to the Church of England, which is a spin-off of the pagan whore religion known as Catholicism! They have the exact same pagan rituals minus them taking orders from the false prophet Pope!!!

…Adam Kendry, a lay member of the Synod and a representative of the Royal Navy, asked: “What is the Church of England’s definition of a woman?”

In response, Dr Robert Innes, the Bishop in Europe, said that “there is no official definition”.

Well, here is the “Official Definition” from THE WORD OF GOD you anti-Christ Devils. Have the FOOLS not read this in Genesis? It is really simple to understand, that is IF you sane and NOT demon possessed!!!

Genesis 2:22-24 “And the rib, which the LORD God had taken from man, made he a woman, and brought her unto the man. 23 And Adam said, This is now bone of my bones, and flesh of my flesh: she shall be called Woman, because she was taken out of Man. 24 Therefore shall a man leave his father and his mother, and shall cleave unto his wife: and they shall be one flesh.”

I don’t understand because these fools pray to Mary, the MOTHER of Jesus, who was a WOMAN! 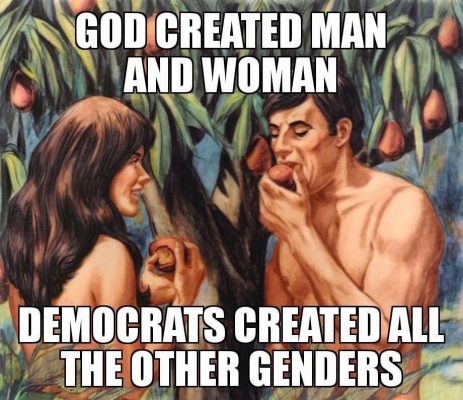 A senior Bishop said that the meaning of the word woman was previously “thought to be self-evident” but “additional care” was now needed.

Rt Rev Robert Innes made the comments in a written reply to a question submitted to General Synod as institutions grapple with the ongoing debate surrounding trans rights and what defines “a woman”.

His admission has stirred some criticism.

MSN reports: While the new stance has been welcomed by liberal wings of the Church, the comments have also provoked criticism – with gender-critical campaigners saying that “whether your starting point is biology or the Bible”, the answer to the question of what is a woman remains the same.

Rev Angela Berners-Wilson, England’s first woman priest, said that she is “not totally happy” with the answer, but added that the issue is “sensitive”.

‘We need to be very sensitive’

Church officials are currently engaged in Living in Love and Faith (LLF), the institution’s ongoing and landmark project aiming to tackle how questions about identity, sexuality, relationships and marriage fit with the Church.

The issue of defining what a woman is emerged in written questions to the General Synod, the Church’s legislative body, in which Adam Kendry, a lay member of the Synod and a representative of the Royal Navy, asked: “What is the Church of England’s definition of a woman?”

In response, Dr Robert Innes, the Bishop in Europe, said that “there is no official definition”.

The Bishop in Europe, who was also replying in his role as chairman of the Faith and Order Commission, said in his written response: “There is no official definition, which reflects the fact that until fairly recently definitions of this kind were thought to be self-evident, as reflected in the marriage liturgy.

“The LLF project however has begun to explore the marriage complexities associated with gender identity and points to the need for additional care and thought to be given in understanding our commonalities and differences as people made in the image of God.”

Rev Angela Berners-Wilson, who became the first woman to be ordained as a priest in England in 1994, and  who has recently retired, told The Telegraph in response to the Bishop of Europe’s answer: “I’m not totally happy with it. I mean, I do think certain things like men can’t have babies just to say the complete obvious thing.

“But I think we need to be very sensitive and maybe we need to reexamine our boundaries.”

Maya Forstater, executive director of the Sex Matters campaign group, described the Bishop’s answer as “shocking”, saying that “the concepts of male and female did not need to have a formal official definition” because “they are older than human life itself”.

She added: “When the Government redefined women through the Gender Recognition Act, the Church of England could have stuck with its long-established understanding, which makes sense whether your starting point is biology or the Bible.

“It is shocking that they so readily gave up the definition of man or woman for the state to amend, as if this fundamental truth did not matter.”

However Jayne Ozanne, synod member and founder of the Ozanne Foundation in 2017 – which works with religious organisations around the world to tackle prejudice and discrimination of LGBTQI people – described the question as “passive aggressive”.

She said: “Mr Kendy’s question is sadly a prime example of a passive aggressive question that is designed to upset the LGBT+ community and particularly the trans members in our midst.

“It’s time these anti- LGBT attacks stopped and that we learnt to acknowledge that life is not quite as black and white as some appear to think it should be.”

Dr Jane Hamlin, president of Beaumont Society charity, which supports trans people, added: “I am puzzled why some people are so obsessed with defining ‘woman’. Why might this be an issue for the Church of England? Source article