That is like the Pot calling the Kettle Black!! I say BOTH ISLAM and CATHOLICISM are the ‘Greatest Threat (s) in the World’!

Both religions have, and continue to be responsible for MILLIONS of Souls being condemned to an ETERNAL HELL! Just another sign of CathoIslam!

Robert Spencer | Via PJ Media – The world is so crazy these days that if you enunciate unpopular truths, people who are supposed to be moral authorities will pressure you to retract and apologize. A Roman Catholic priest in Ilhan Omar’s Minnesota, the Rev. Nick VanDenBroeke, has been compelled by Catholic authorities to apologize “for saying in a sermon that Islam was ‘the greatest threat in the world’ to the United States and Christianity.” This is rather like making a man apologize for saying that water is wet, but that’s where we are these days.

The whole episode, which unfolded this week, encapsulates a great deal of what is wrong with the contemporary Catholic Church and the imperative of “interfaith dialogue,” and illustrates the apparently impenetrable confusion people have today between criticizing ideas and discriminating against human beings. The implications are also much larger than just Rev. Nick VanDenBroeke and the Catholic diocese of St. Paul, Minnesota. This incident illustrates a deep sickness in American society: when telling the truth earns you rebukes and condemnations, we’re all in trouble. 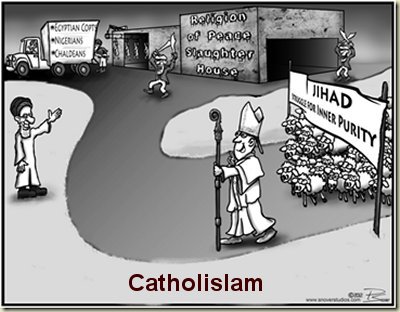 VanDenBroeke landed in hot water “for saying in a sermon that Islam was ‘the greatest threat in the world’ to the United States and Christianity.” Let’s see. There have been over 36,000 jihad attacks around the world since 9/11, each committed in the name of Islam and in accord with its teachings. Jihad groups routinely call for jihad massacres in the United States and of Americans.

As for Christianity, in 2019, Christians faced “extreme, very high or high levels of persecution” in 73 countries, affecting 245 million Christians. In the Middle East, the Christian share of the population has shrunk to about 5 percent (if that), down from more than 20 percent at the turn of the last century. The decline attests to a century of ruthless persecution — book ended by the Greek, Armenian, and Assyrian genocides committed by Turkey a century ago and the recent one attempted by ISIS. The ten worst countries in the world today for Christians, with the worst ranked first, are North Korea, Afghanistan, Somalia, Sudan, Pakistan, Eritrea, Libya, Iraq, Yemen, and Iran — eight Muslim countries, one with nearly fifty percent Muslim population, and North Korea.

So is Islam a threat to the United States and Christianity? That is obvious. But when VanDenBroeke noted this, those earnest patriots at the Hamas-linked Council on American-Islamic Relations (CAIR) complained, and no one involved seems to have pointed out that CAIR has ties to Hamas, and has opposed virtually every counter-terror initiative that has ever been proposed or implemented.

Instead, Roman Catholic leaders immediately forced VanDenBroeke to apologize. Note carefully the statement of Archbishop Bernard Hebda: he “quoted Pope Benedict XVI as saying that the church looks with esteem to Muslims, who worship God through prayer, fasting and the giving of alms,” and said: “If all of us who believe in God desire to promote reconciliation, justice and peace, we must work together to banish every form of discrimination, intolerance and religious fundamentalism,” Hebda said. “He added that Pope Francis also has stressed the importance of dialogue between Catholics and Muslims and has urged all Christians and Muslims to be ‘true promoters of mutual respect and friendship, in particular through education.’”

All right. But none of what Hebda said actually speaks to the point VanDenBroeke was making. To note that Islam is a threat does not mean that one does not esteem Muslims as human beings. This point is constantly confused nowadays, often by people who want to discredit those who raise awareness of the jihad threat by claiming that they hate Muslims as people. In reality, however, to criticize an ideology is not to hate anyone. To note that Nazism was a threat did not mean that one hated Germans, or did not esteem them as human beings.

Nor did VanDenBroeke promote any form of “discrimination, intolerance and religious fundamentalism.” He simply noted a threat, which is a real threat. He said: “I believe it is essential to consider the religion and worldview of the immigrants or refugees.” Well, isn’t it? Wouldn’t it be reckless not to do so?

One thing is certain: VanDenBroeke is right, at least regarding today’s Catholic Church, when he said: “I realize that my comments were not fully reflective of the Catholic Church’s teaching on Islam.” All too many in the Catholic hierarchy behave as if it really is a dogma of the Church that Islam is not and cannot be a threat. They are, of course, ignorant of their Church’s own history, as The History of Jihad demonstrates in detail.