By doing so, they have placed the Sexual Perverts on a pedestal, and made them as Idols to be worshiped! 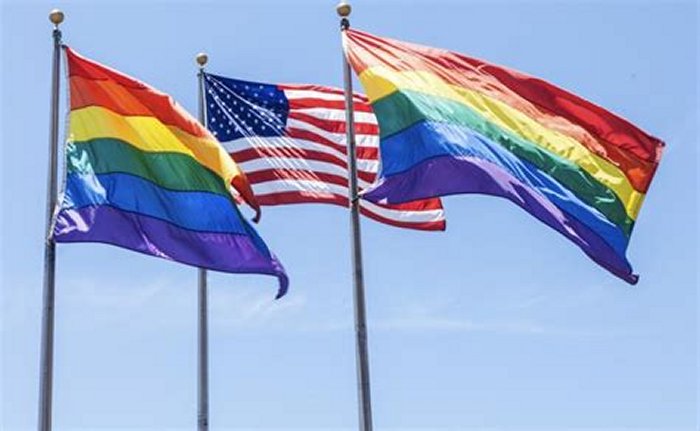 The last thing that happens before God destroys a City, State, or Country, is rampant sexual perversion. Read the Book! America has become the Modern Day Sodom and Gomorrah! Just try to watch TV these days. Commercials, and even kids cartoons, are full of Sexual innuendo.

Nearly all of the commercials I see, when I do watch the one-eyed-monster, are featuring Homosexuals and Lesbians holding hands and or kissing. Makes one want to Vomit! Well, those of us who are NOT Sexual Deviates that is!

Now the Biden administration has secured the destruction of America. By flying the Queer flag they are in essence saying we reject Almighty God and HIS Word! It is an ABOMINATION and the Wrath of God will soon be poured out on this Wicked Nation.

America is on a Road to Destruction

What will drive the final nail is when they pull support from, and may even remove the Embassy from Jerusalem!!

Penny Starr | Breitbart News – LGBT activists are cheering Secretary of State Antony Blinken’s announcement that he will reverse an order from President Donald Trump and put up “pride” flags at U.S. Embassies around the world.

Outfront magazine reported on the development:

The Biden administration is off to a hopeful start, as Secretary of State nominee, Antony Blinken, has confirmed a recommitment to LGBTQ rights.

In a memo from July 2020, former Secretary of Defense Mark Esper released a list of flags permitted to be displayed at U.S. military bases. Missing from the list was the LGBTQ pride flag, which Esper compared to the confederate flag. Prior to the ban, embassies raised the flag during pride month on the official embassy flagpole.

During the hearing, Blinken also confirmed that he plans to appoint an envoy for the Human Rights of LGBTQ persons, a position created by Barack Obama in 2015 that wasn’t filled during the Trump presidency.

Blinken claimed violence against that demographic increased while Trump was in office.

“We’ve seen violence directed against LGBTQ people around the world increase,” Blinken said. “And so, I think the United States playing the role that it should be playing in standing up for and defending the rights of LGBTQ  people is something that the department is going to take on and take on immediately. Raising the pride flag is one way to outright show LGBTQ solidarity.”

What will be the next Abomination this Godless, Pervert filled, administration will do?

Perhaps erect an Idol of Baal and start public sacrifice of Children? They are ready do it by Abortion!

People are perishing for lack of knowledge.  People today do not understand spiritual things.  Just because they do not understand does not mean that their lives are not affected or that the spiritual power has been lost.  Everything we do has a spiritual root.  Raising these flags brings repercussions that will be felt.

Flags today have become a thing of scorn and ridicule, as the New World Order destroys all sense of Nationality and Tribe. BUT, throughout history, Flags and Banners have represented the beliefs and purposes of those who carry them. Flown as signals, rallying points and standards of identification, flags define battle lines, and give direction and encouragement. They declare the victory and identify the one in authority.  The flag was the first object of attack in battle, and its fall would mean confusion if not defeat. Banners are raised to celebrate and honor. They hang from the rafters of arenas honoring champions. They are raised to honor soldiers returning from war. They adorn public places to celebrate occasions or people who deserve honor.  Even so, the main reason that flags  and  banners are displayed is that they represent entities, including a particular country, state, business, leader, community or organization. They are visual symbols used for identification. They declare the one in Authority, to what Kingdom do you belong?   Flags have very significant spiritual power, because they pierce the air with color and with movement.  The force of impact as they wave or are waved cuts through the air.  We know who is the Prince of the Power of the Air, and he doesn’t like his territory to be disrupted.

A flag is also know as a Banner. Jehovah Nissi is how the King James Bible writes this name of God. The Hebrew is more likely to be pronounced Yahweh Nissi. Jehovah my banner, the title given by Moses to the altar which he erected on the hill at Rephidim on the top of which he stood with uplifted hands while Israel prevailed over their enemies the Amalekites (Exodus 17:15). That hill at Rephidim is the place where Moses struck a rock of Horeb, so that it gave water (Exodus 17:6), and  he named the place Massah and Meribah.  Jehovah/Yahweh Nissi is one of many descriptive names for God.  Isaiah prophesied that “the root of Jesse”(Jesus/Yeshua) will stand as a banner for the peoples” (Isaiah 11:10). God grants us the victory over the flesh, the world and the devil.

How sad it is to see, that the nation who has done more to spread the love of GOD and the Gospel of Jesus Christ than any other, is now spreading the doctrines of demons.  How far we have fallen.  The WRATH OF GOD, is not far now.

It is no wonder that those democrats are fully behind the promotion of perversion, being among those sunk in that evil.  They can deny all they like, their sin will find them out. Numbers 32:23  For there is nothing done in secret that will not be revealed or hidden that will not be known. Ecclesiastes 12:14

Kamala Harris’ Chief of Staff is a proud Black  lesbian

History was made at the weekend as Joe Biden was confirmed as the winner of the U.S. presidential election. What made this even more of a massive win was that joining Biden as his Vice President for the next four years will be Kamala Harris – the first Black woman elected into such a position in the White House.

Kamala has shown huge amounts of dedication to the LGBTQI community throughout the years by vowing to end the epidemic of violence against trans women of colour, officiating a same-sex wedding in California, and by appointing a Black lesbian, Karine Jean-Pierre, as her Chief of Staff.

Karine Jean-Pierre has long been a vocal advocate for LGBTQI rights and equality herself. See more

Former Democratic nominee for Nevada lieutenant governor Lucy Flores has accused former Vice-President Joe Biden of smelling her hair before planting a “big slow kiss” on her head in what has become somewhat of a predatory trademark maneuver. See more

The fact that these people are in office all across our land is a clear indication of the spiritual state of our nation.  God gives us the leaders we demand and/or deserve.  It doesn’t take a detective to discover that our Nation has for the most part become PAGAN.  Chasing after other gods and other paths.  Turning from the TRUTH of the WORD of GOD.  SO JUDGEMENT IS UPON US!!

Romans 1:18-32 “For the wrath of God is revealed from heaven against all ungodliness and unrighteousness of men, who hold the truth in unrighteousness; 19 Because that which may be known of God is manifest in them; for God hath shewed it unto them. 20 For the invisible things of him from the creation of the world are clearly seen, being understood by the things that are made, even his eternal power and Godhead; so that they are without excuse: 21 Because that, when they knew God, they glorified him not as God, neither were thankful; but became vain in their imaginations, and their foolish heart was darkened. 22 Professing themselves to be wise, they became fools, 23 And changed the glory of the uncorruptible God into an image made like to corruptible man, and to birds, and fourfooted beasts, and creeping things. 24 Wherefore God also gave them up to uncleanness through the lusts of their own hearts, to dishonour their own bodies between themselves:25 Who changed the truth of God into a lie, and worshipped and served the creature more than the Creator, who is blessed for ever. Amen. 26 For this cause God gave them up unto vile affections: for even their women did change the natural use into that which is against nature:27 And likewise also the men, leaving the natural use of the woman, burned in their lust one toward another; men with men working that which is unseemly, and receiving in themselves that recompence of their error which was meet. 28 And even as they did not like to retain God in their knowledge, God gave them over to a reprobate mind, to do those things which are not convenient; 29 Being filled with all unrighteousness, fornication, wickedness, covetousness, maliciousness; full of envy, murder, debate, deceit, malignity; whisperers, 30 Backbiters, haters of God, despiteful, proud, boasters, inventors of evil things, disobedient to parents, 31 Without understanding, covenantbreakers, without natural affection, implacable, unmerciful: 32 Who knowing the judgment of God, that they which commit such things are worthy of death, not only do the same, but have pleasure in them that do them.”

Are you a Miserable Homosexual, Lesbian or Tranny and want out?

Jesus Cures the the Curse of Homosexuality