Well, at least one God Hating Presstitute at the New York Times wants People to Give Up God! I am sure his fellow Luciferian Presstitutes are of the same Demonic mind set as he is!!

Psalms 92:5-6 “O LORD, how great are thy works! and thy thoughts are very deep. 6 A brutish man knoweth not; neither doth a fool understand this.” 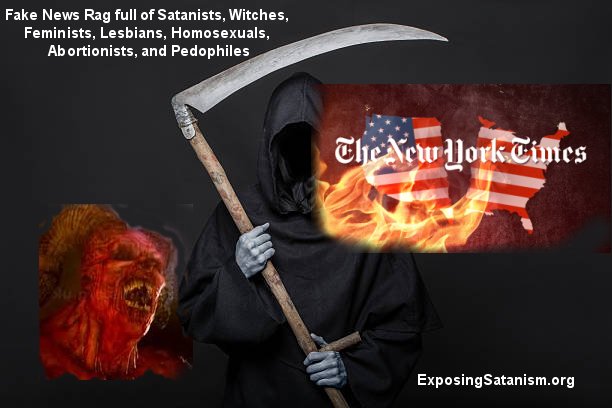 Thanks to Foolish Presstitutes and Talking Heads like him, most people have given up God! Apostasy is rampant because of limp wristed preachers who are given over to the lust of the eye and flesh.

Most churches are way out of touch with God, Jesus and the Holy Spirit. But the Lord is exposing those disciples of Lucifer and weeding them out!

2nd Timothy 3:1-5 “This know also, that in the last days perilous times shall come. 2 For men shall be lovers of their own selves, covetous, boasters, proud, blasphemers, disobedient to parents, unthankful, unholy, 3 Without natural affection, trucebreakers, false accusers, incontinent, fierce, despisers of those that are good, 4 Traitors, heady, highminded, lovers of pleasures more than lovers of God; 5 Having a form of godliness, but denying the power thereof: from such turn away.“

And I could have posted 2 more verses about Silly Women, but this is not about Jezebels, it is about an Ahab!!!

Joel B. Pollak | Breitbart News – Titled “In This Time of War, I Propose We Give Up God,” the article claims that God is responsible for “war and violence” and for “oppression and suffering,” and suggests that people stop teaching children about Him.

Author Shalom Auslander, who is disillusioned about his upbringing in a religious Jewish community in New York, argues (original emphasis):

God, it seems, paints with a wide brush. He paints with a roller. In Egypt, said our rabbi, he even killed first-born cattle. He killed cows. If he were mortal, the God of Jews, Christians and Muslims would be dragged to The Hague. And yet we praise him. We emulate him. We implore our children to be like him.

Perhaps now, as missiles rain down and the dead are discovered in mass graves, is a good time to stop emulating this hateful God. Perhaps we can stop extolling his brutality. Perhaps now is a good time to teach our children to pass over God — to be as unlike him as possible.

…. Killing gods is an idea I can get behind.

Wow, you can tell this fool has a beef with THE Creator! And if not careful, God will turn him over to Satan and to a reprobate mind, IF that has not occurred already! And since he is spewing his disdain at the LORD during the remembrance of Passover, and MORE important, The Resurrection of Our Lord and Savior Jesus Christ, these scriptures are apropos!

1st Corinthians 5:1-7 “It is reported commonly that there is fornication among you, and such fornication as is not so much as named among the Gentiles, that one should have his father’s wife. 2 And ye are puffed up, and have not rather mourned, that he that hath done this deed might be taken away from among you. 3 For I verily, as absent in body, but present in spirit, have judged already, as though I were present, concerning him that hath so done this deed, 4 In the name of our Lord Jesus Christ, when ye are gathered together, and my spirit, with the power of our Lord Jesus Christ, 5 To deliver such an one unto Satan for the destruction of the flesh, that the spirit may be saved in the day of the Lord Jesus. 6 Your glorying is not good. Know ye not that a little leaven leaveneth the whole lump? 7 Purge out therefore the old leaven, that ye may be a new lump, as ye are unleavened. For even Christ our passover is sacrificed for us:”

If this Apostate Jew knew anything about about God, he would know that HE, GOD, gives people, past, present and future, every opportunity to repent and turn from their wicked ways, BEFORE judgment comes upon said wicked people! He, God, ALLOWS Satan to enter into, and manipulate man into the wars he is rambling about and blaming God for.

It seems humanity does not remember a lesson learned, will go right back into rebellion, not very long after the LORD has restored them and the Blessings return! Then the warnings to the rebellious people come once again followed by God’s Wrath being poured out once again!

Just look at what the Kings of Israel did. With just a few exceptions, the majority “Did that which was Evil”!

Look at who America has had as presidents and what they did! There IS a Parallel people! Wake UP!

Perhaps he is listening to that Bastard (Hebrews 12:8) False Prophet Pope Francis spewing his Marxist, Socialist nonsense…  Pope Francis: ‘We Are Racists, We Are Racists’. After all, the New York Times IS a Marxist/Socialist Fake News Outlet filled with the Dregs of Journalism!

God’s People for the most part will NOT take this Fool to the Woodshed!

It is not God that people need to give up. It is Religion, Fools like him, the Communist, Atheist, Luciferian News Outlets that are filled with Satanists, Witches, Pedophiles, and other Sexual Perverts, that need to be Given Up On!

When the Righteous Rule Part 1

When the Righteous Rule Part 2