So why is a Practicing Catholic Witch clutching a Bible and reading from it?  Matthew 7:15-20

Catholics are not supposed to read the word. They are supposed to listen to, follow the teaching of the momma church and a Homosexual Priest!

Isaiah 32:5-8 “The vile person shall be no more called liberal, nor the churl said to be bountiful. 6 For the vile person will speak villany, and his heart will work iniquity, to practice hypocrisy, and to utter error against the LORD, to make empty the soul of the hungry, and he will cause the drink of the thirsty to fail. 7 The instruments also of the churl are evil: he deviseth wicked devices to destroy the poor with lying words, even when the needy speaketh right. 8 But the liberal deviseth liberal things; and by liberal things shall he stand.”

Churl – A rude, fraudulent person. The instruments also of the CHURL are evil: he deviseth wicked devices to destroy the poor with lying words, even when the needy speaketh right.  Source

She can’t be out done by anyone and has to APPEAR Religious. She is a FRAUD, is merely religious and unless she truly seeks God, accepts his Son Jesus as Lord and Savior, she along with billions of others are doomed to Hell!

I just wonder if her fingers burned when she was holding it? Dose she hear the cries of babies she proudly helps kill inside the wombs of their mothers?

I also wonder if the president gave a press conference sitting on a toilet with his pants down taking a crap, would she try to up him and do the same?  My Lord I can’t get the image out of my mind now! It’s like a competition to this Communist Jezebel!

It did no good though. It was all theatrics by an Evil Jezebel!

Nasty Nancy was awarded the “Epitome of an Ass Clown Award”, because among other things, that is what she is, and a Hypocrite! 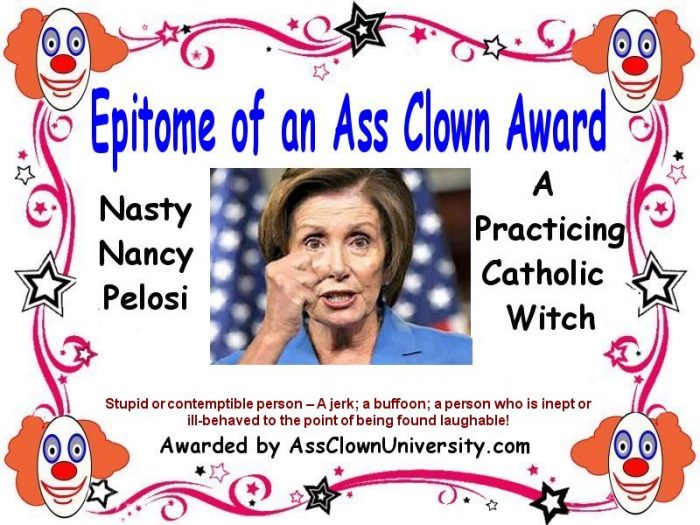 She has been part of the problem for 30+ years! She fans the flames of Racism and hate every time she opens that lying mouth!

Hey Nasty Nancy—go collude with the Russians by grabbing a bottle of Vodka—get a tub of that expensive Ice Cream from your $24, 000 fridge—get drunker than you always are—and shut that filthy pie hole!

Defying His Enemies, President Trump Walks To Burned Church And Lifts Up The King James Bible, Driving The Enemies Of God Into Apoplectic Frenzy

The Trump Derangement Disease will never be cured! Schumer Calls for Probe into Treatment of Protesters Outside White House

The Clowns at CNN had to weigh in!

In light of the President giving another address to the nation and walking over to the damaged St. John’s Episcopal Church, Cooper and guests lashed out at Trump as a “little big man,” “thug,” and “wannabe dictator” elected by a pathetic, despicable American public who wanted to cause “disruption” they must now live with.

CHRIS CUOMO: Help us understand that, because I’m sure you see a big role of faith in the understanding and the demand for social justice. What bothers you here?

FR. EDWARD BECK: Well, Mo, Jesus was a nonviolent protester. I mean that was his life. That’s what he stood for. He was against unjust structures. And he didn’t condone violence to oppose those structures. But he certainly did oppose them. In nonviolent protest. And so to see nonviolent protesters pushed back by force, and rubber bullets, and tear gas, for a photo op, in front of a church, a desecrated church, I didn’t even get the symbolism of holding up the Bible. The word of God was on the side of protesters who were pushed back, so it was so conflictual to me, I didn’t understand what I was seeing, what was the president trying to say by holding up the Bible in front of that church and who was he appealing to?

CUOMO: That’s what I’m asking you. You’re the priest. What is that supposed to mean when you hold up a Bible in front of a church? What does that mean? That he’s holy? What is he doing right there?

CUOMO: That must be it.

BECK: He was standing for the antithesis of it, though.